Fourteen long years ago, back when there really was just one Battlefield and Halo LAN parties were a thing, The Onion ran a Christmas Carol-inspired article that tried to forecast the state of gaming for Christmas 2016:

Ghost Of Christmas Future Taunts Children With Visions Of PlayStation 5.

Let's see how they did!

First, the console itself: 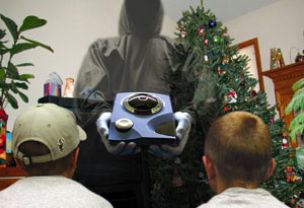 The resolution isn't great, but it clearly suggests Sony would follow the colorful curvy plastic style that defined competing gadgets like the iMac and the Gamecube -- ironic since most consoles now resemble the minimalist black slab of the PS2.

As for the article...

They start out getting a little ahead of themselves -- with the PS4 Pro launch, we're only just getting to the (at best) PlayStation 4.5, and bit ratings have been irrelevant for years. The processor speed is an absurdly high 45 Ghz, with a "trinary" architecture you don't see outside of obscure science fiction. But while the "CineReal booster" and "2GB biotexturing" are likewise nonsense, they strike gold with "360-degree online-immersion play." Can you say PSVR? 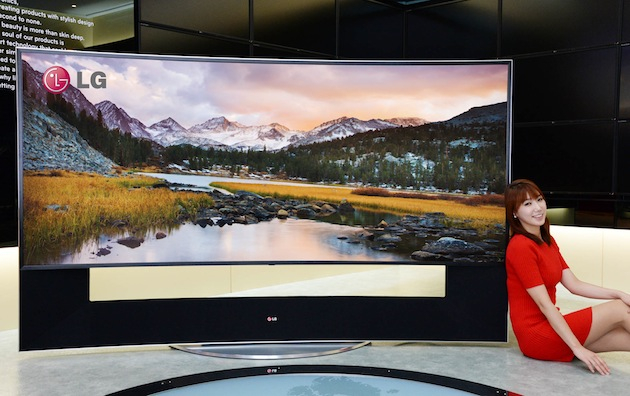 "I usually start by showing them Toteki Aluminum, one of the future's most popular fight-and-chase games," the Ghost said. "It's far from the best available in 2016, but it always blows their mind to see the guy get hit with the falling sign while the drops of sweat fly off his face. You can see the whole scene, distorted, in each of the individual drops. That gives them a good preliminary idea of the graphics technology we're dealing with."
Click to expand...

Toteki and "fight-and-chase" are an invented franchise (and genre), but NVIDIA was already touting "enhanced rain" with individually modeled raindrop physics last year.

The Ghost said he then likes to show Airsledz, a racing game in which jet-powered sleds whoosh through a four-dimensional racing course in the sky. The game, he said, enables the player to compete online against dozens of other players all around the world.

"They always ask if you can play it on the Internetit's so cute how they still call it 'the Internet'and I tell them, 'Hey, you can play this against 63 other PS5 owners simultaneously. At least you can in 14 years,'" the Ghost said. "And you should see their jaws hit the floor when they learn about the add-on accessories that enable users to actually fly around the room during gameplay."
Click to expand... 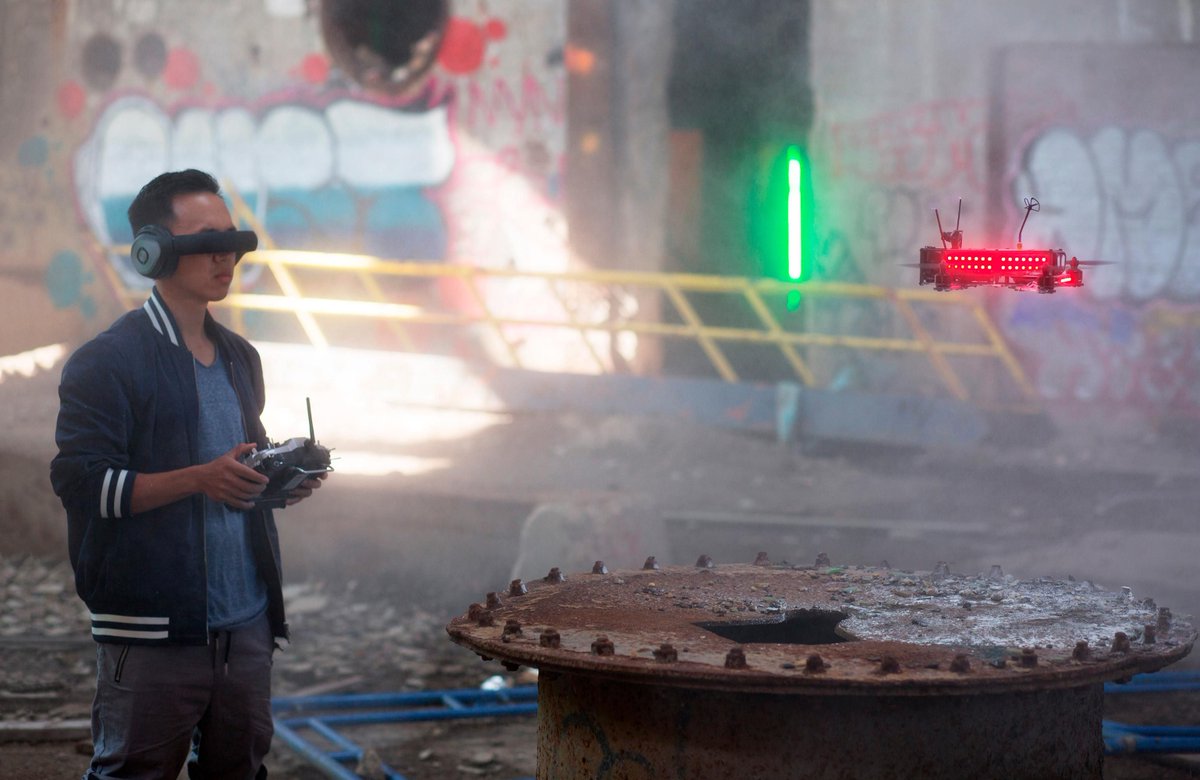 Also, "The Internet" is starting to sound a little antiquated, and 64-player MP is becoming more common.

Younger children, he said, salivate upon seeing Level One of Zonic Fugue. In it, Zonic, the indigo-colored son of Sonic The Hedgehog, faces off against Chuckles The Echidna in a Terrordactyl sky-joust, attempting to earn the Ankle Rockets he needs to gather the five Chaos Sapphires that, when combined, form the master key that opens the Melody Dome.
Click to expand...

No word on if this title continues to defy the Sonic cycle, though the picture it paints sounds interesting.

To break the spirits of children 12 and up, the Ghost runs a brief demonstration of Back To Werewolf Island. The horror-action thriller, he said, will be produced in full 10.8 Omneo sound and feature new music from 40 of 2016's hottest skagcore acts, including FU3P, Dredgerous, and Frances Cobain.
Click to expand...

Sounds a lot like The Order: 1886! Minus the licensed soundtrack, which has fallen a bit out of fashion. 10.8 surround sound is a bit over the top, though (eight subwoofers?). Interestingly, while Frances Cobain is more of a visual artist, she did take baby steps into music this year -- though it doesn't exactly sound like "skagcore".

The Ghost said he shows the children a brief clip of DC vs. Marvel, in which cinema-realistic figures of Spider-Man and the Joker dash across impossibly detailed city streets, attacking each other with dozens of different offensive maneuvers while leaping, somersaulting, and throwing objects.

"They usually start trembling at that point," the Ghost said. "That's when I go in for the kill by casually mentioning that the game comes packaged with the 2016 feature film of the same namenot on DVD, of course, but on SCAP. Ten times better."
Click to expand...

We've yet to see a proper DC/Marvel crossover in any medium outside of 90s-era comics, but this did a good job foreshadowing grimgritty superhero fighting titles like Injustice: Gods Among Us. Also, is the current Blu-Ray standard ten times better than DVD? Not exactly. 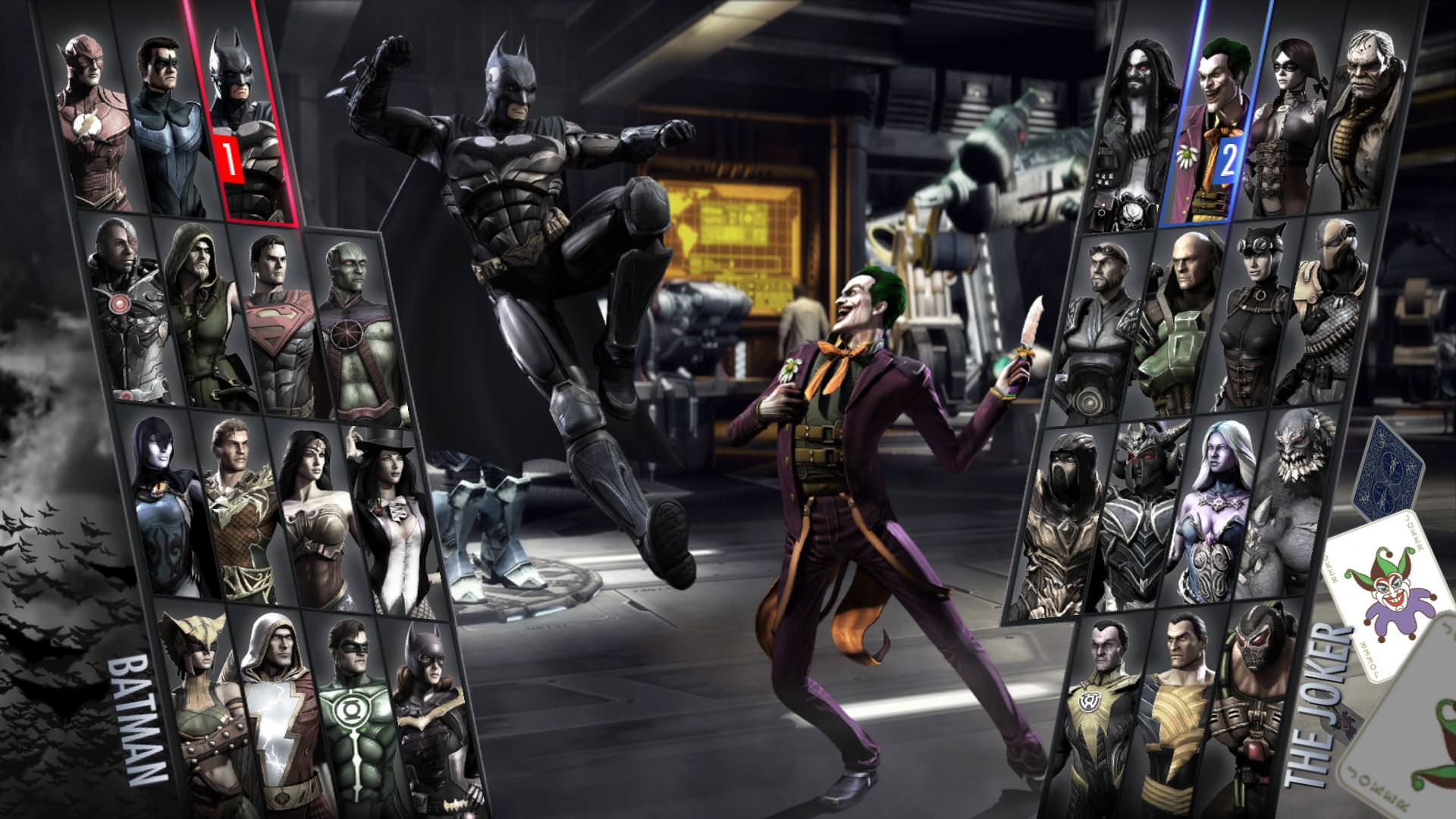 The few children unbroken by DC vs. Marvel are invariably finished off by the sight of Star WarsEpisode IX: Jedi Destiny, a game which employs the world's most advanced artificial-intelligence algorithm to place the player inside the film's climactic battle sequence on the planet Mon Jeedam.

"With more than 12,000 distinct soldiers, creatures, and vehicles fighting at once, and the option to command the New Republic Fleet, the Imperial Armada, or the Yuuzhan Vong Invasion Force, it's not merely the best Star Wars game that's ever existed; it's an interactive film that looks better than any movie that's ever been made. No child has failed to sob hysterically at the sight of it."
Click to expand...

While this sounds remarkably similar to Star Wars: Battlefront, we won't be seeing Episode IX until 2019, and the entire expanded universe has been junked. :,(

Currency re-valuation. Hmmm. Check back in a year?

Someone please make Toteki Aluminum? I'd play the shit out of that.
W

Something something simpsons has a gif for it
T

I didnt even know the onion existed then
L


TimeEffect said:
I didnt even know the onion existed then
Click to expand...

They've been around for a few decades. Sometimes shockingly accurate with their predictions.
Z

That Canadian price though
M

TimeEffect said:
I didnt even know the onion existed then
Click to expand...

keep that hamster wheel spinnin
I

Believes Dragon Quest is a franchise managed by Sony

DOA5 already perfected sweat in fighting games and environmental destruction on 360 and PS3 Onion, systems only 2/3 years ahead of your article.
J 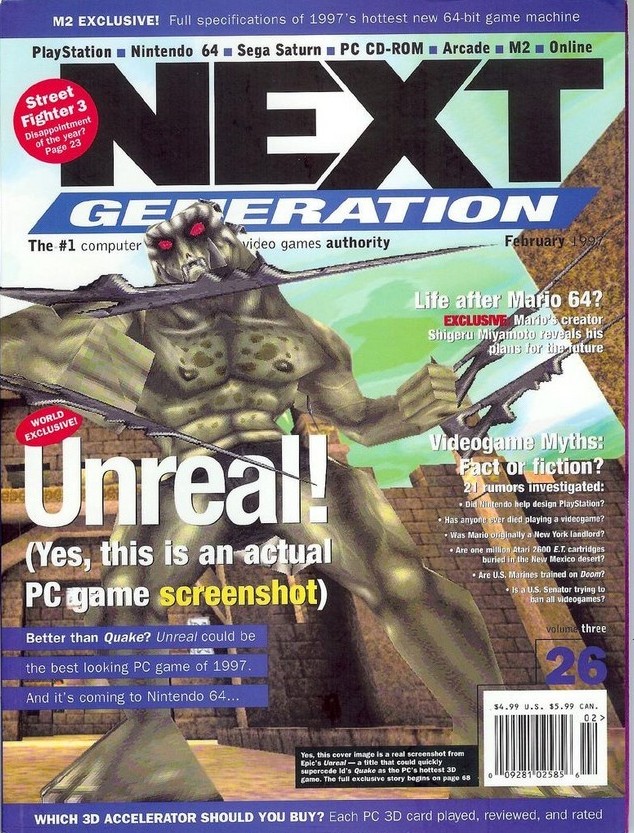 Zeyphersan said:
That Canadian price though
Click to expand...

Even at the time, I was wondering why I should be impressed that this was an actual screenshot.
F

I loved Next Generation magazine though. It's pages were glossy and the cover was even better.

Trivia: I got into trouble at school over this Next Gen magazine/cover: 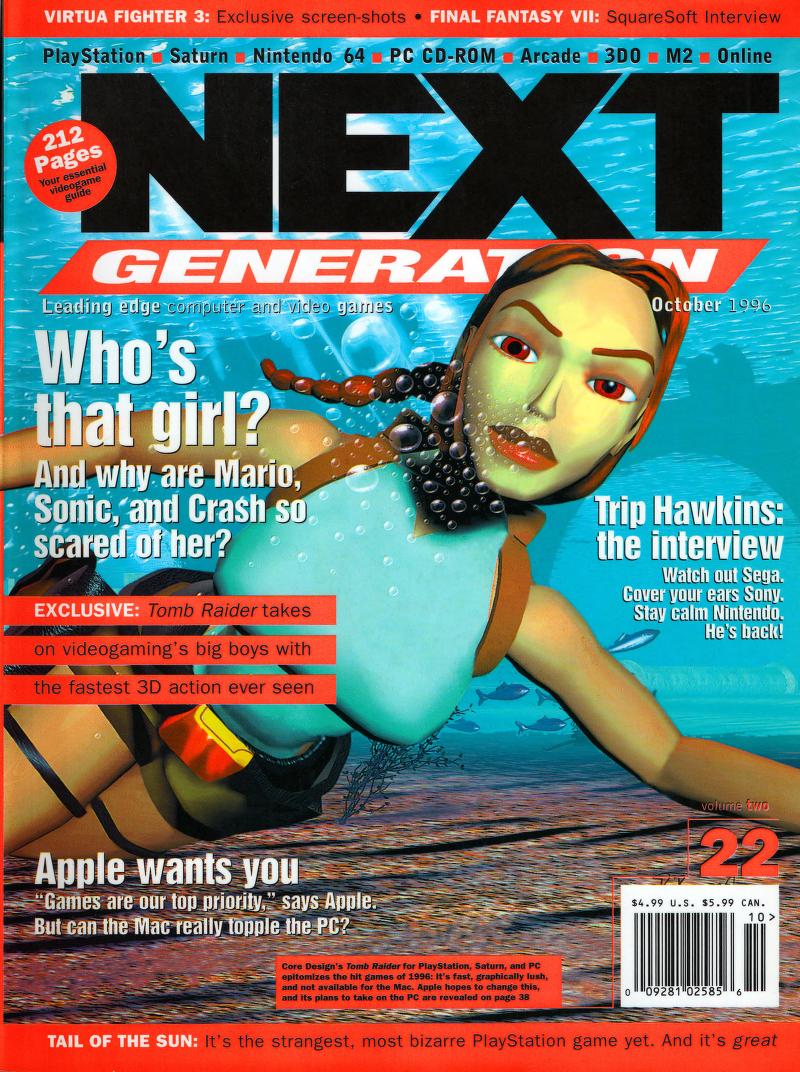 TimeEffect said:
I didnt even know the onion existed then
Click to expand...

The first Onion article I read was this one in 1999.

Scoscia noted that "Number 2.0," as Silicon Valley insiders have dubbed it, will be cross-platform compatible and fully 2K Flushes compliant.
Click to expand...

Mike M said:
Even at the time, I was wondering why I should be impressed that this was an actual screenshot.
Click to expand...

It was impressive. Because at the time FPS graphics looked like this: 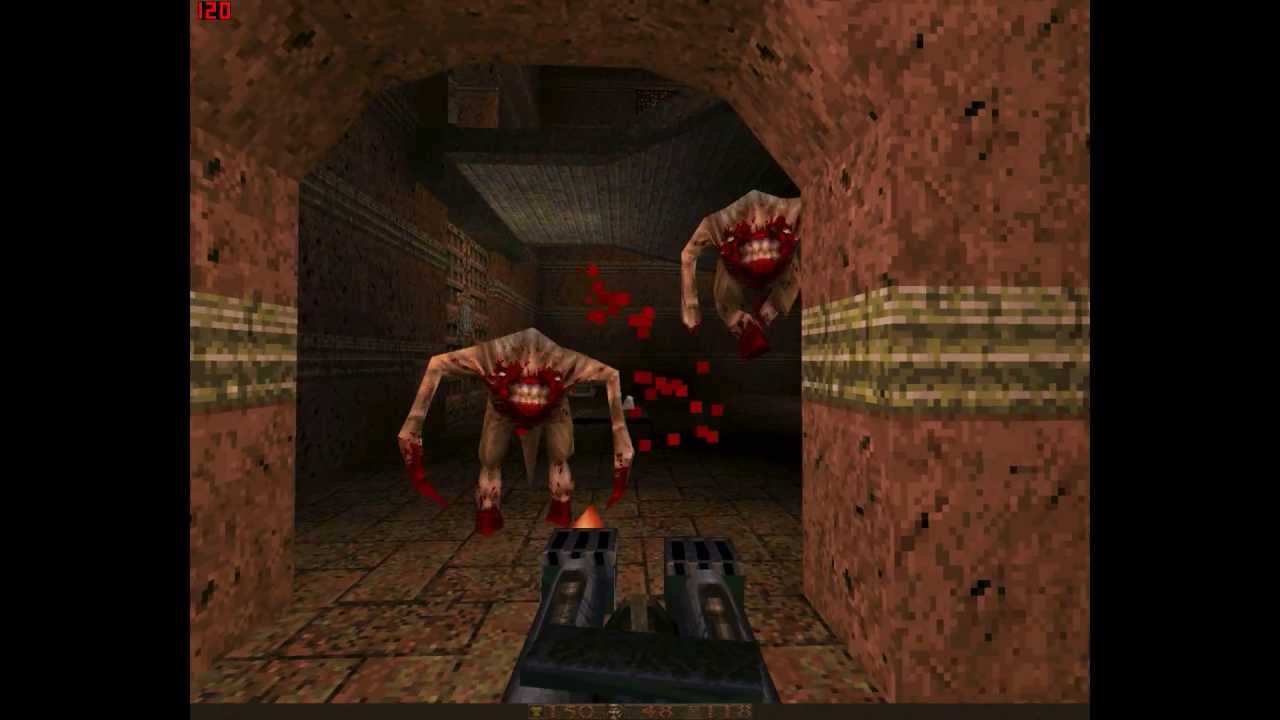 Let me just say that Unreal was completely mindblowing at the time. The reflective surfaces alone were jawdropping. The scale of heights was incredible.
M

All the headlines on the Lara Croft cover looks like something from a Tabloid.
M

RustyNails said:
It was impressive. Because at the time FPS graphics looked like this:

Let me just say that Unreal was completely mindblowing at the time. The reflective surfaces alone were jawdropping. The scale of heights was incredible.
Click to expand...

But none of that is apparent in the screenshot of the cover. It's just a weird worms-eye view of a character model that has marginally more geometry going on against a backdrop of more brown castles.

Unreal was a great game, but this screenshot doesn't do a great job of demonstrating why that is the case (and certainly is not so amazing that it needs the magazine to assure us it's not pre-rendered or doctored, or whatever the point of that statement was).
5

They've been around a lot longer than that!

5taquitos said:
They've been around a lot longer than that!
Click to expand...

The book that collects these "historical" issues, Our Dumb Century, is one of the sharpest and most hilarious works of satire I've ever seen. I did a post on it for Metafilter a few years back -- all the links are broken, so it definitely needs updating, but even just the headlines listed in the timeline are LOL-worthy.
J

Just saw this on Reddit -- apparently at around the same time this article ran, Sony put out its own fake teaser for the PlayStation 9. Coming Christmas 2078!
V

I loved Next Generation magazine though. It's pages were glossy and the cover was even better.

Trivia: I got into trouble at school over this Next Gen magazine/cover:

Lol her eyes look fucked up.
You must log in or register to reply here.

remember_spinal replied
Apr 28, 2022
Starfield developers aiming for a game with a "vision of a future that’s grounded in reality
Opinion News 2 3 4

lh032 replied
Nov 10, 2021
How Q-Games Got the Rights From Sony to Bring Back Lost PS4 Exclusive The Tomorrow Children