No. This trailer was fucking amazing.

Battlefield is back baby!

Multiplayer only and screenshots are nowhere near same quality as the trailer. Absolute joke.
Last edited: Jun 9, 2021

SantaC said:
No, game engine footage is actual assets that are going to be used in a game. CGI is predefined.
Click to expand...

I thought some of it did look a little 'gamey' and possible. I doubt those explosions will be as good in the game though.

Reindeer said:
Multiplayer only and screenshots are nowhere near same quality as the trailer.
Click to expand...

Where are the screenshots?

Who the fuck is 2WEI? Was EA too cheap to afford the real Motley Crue?

Meh, pretty generic trailer but I'm excited for the game.

SantaC said:
No, game engine footage is actual assets that are going to be used in a game. CGI is predefined.
Click to expand...

DICE's "in engine" footage is the least representative in engine footage around, go look at star wars squadrons prerelease "in engine" then look at gameplay.

SantaC said:
Where are the screenshots?
Click to expand...

Battlefield centric YouTubers like Westie have them up on their channel.
Last edited: Jun 9, 2021

70 dollars on the next gen consoles for less content. no thanks, if it came to gamepass that would be a save.

Xbox fans are gonna be wondering if every up and coming game is gonna be gamepass 'day and date' all generation aren't they?

elliot5 said:
you gotta wait until the xbox conference.
Click to expand...

smart_brazileiro said:
Lol. CGI trailer and zero gameplay. Now we have to wait another 4 days for the gameplay reveal. What a fucking waste of time. Seriously. Fire the whole PR team for this game.
Click to expand...

I haven’t played Battfield since Bad Company 2 but after this trailer I’ll be picking it up.

Better than the BFV reveal, but I'll reserve judgment until I see actual gameplay though.

I have all the faith in this one. Pre-ordered the Gold Edition on Steam.

Tiptop10 said:
Xbox fans are gonna be wondering if every up and coming game is gonna be gamepass 'day and date' all generation aren't they?
Click to expand...

I'm not buying any more releases on XBox while I'm paying for Gamepass, fuck that shit. I'll wait or play it on my PS5

kretos said:
ejecting from the plane firing a rocket and jumping back into the plane?

Is that one of the most icon battfield things? From a practical stand point it makes no sense but the fact you can actually do it in game is wild.

It looks really uninspired which is weird because BF1 and BFV both had a very distinct WW look.

The gunplay in BF1 was fantastic. The problem was that they gave you shitty guns to start off and every class had their own progression system which made getting to the good guns even harder.

But once you got there, the gunplay was top notch. On par with Destiny and CoD imo. They ruined it with BFV by making it less arcadey to appease the BF youtubers who ironically left the game for warzone anyway lol.

Check out this clip when you get a chance. Had a blast playing the game for over 400 hours. I just loved how heavy and fun the guns felt. Great mix between cod and Killzone. The little ping after every kill also reminded me KZ2.


Have you ever heard about "Battlefield moments" ? This is all about it.
Click to expand...

Nah I still think it's idiotic. In-engine cutscenes the entire thing, lame music and memes of the type "hey look look you can do that thing with the jet that everyone knows". I would probably have liked it if those same sequences were from actual first-person gameplay though. Have to wait for the MS show for that 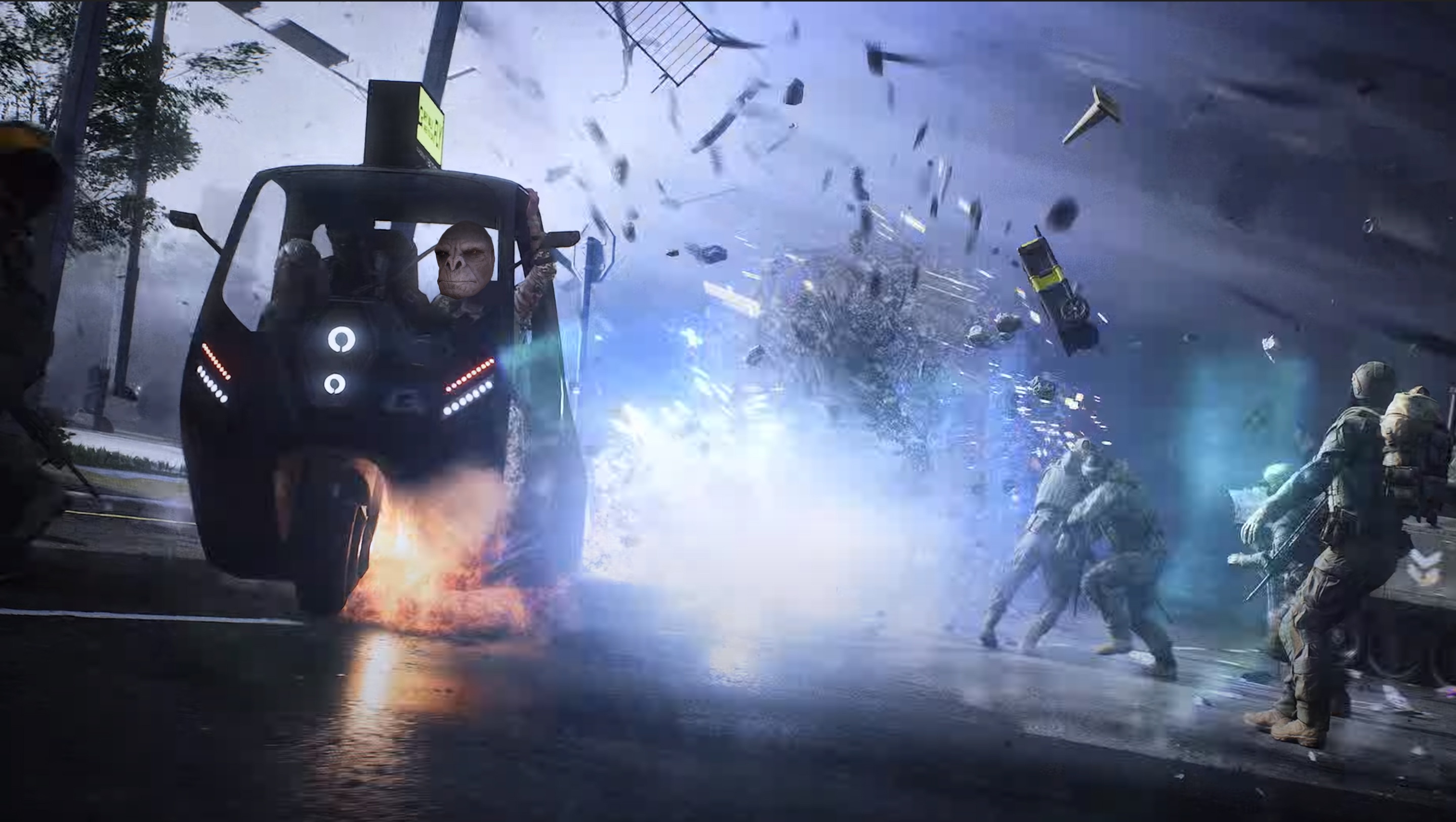 Ok that was wat better than I expected.
Topped BF1 trailer for me.

Only 7 maps at launch? They better be the best damn maps I've ever played.

Birdo said:
It looks like every military shooter made in the last ten years.
Click to expand...

Nah. I don't know what the fuck you've been playing, but I've never seen an MP with all that shit going on. So I'm not shocked that DICE is going fucking HAM on the tech, they are known for that, they got a fucking tornado going on in a match lol

Lol did the ATV guy really kamikaze himself into the helicopter? I'm in

$70 on next gen for multiplayer only game, looool. $120 on consoles for Ultimate edition looooooooooooool.
Last edited: Jun 9, 2021
E

RNG said:
Only 7 maps at launch? They better be the best damn maps I've ever played.
Click to expand...

They're supposedly gigantic with different clusters to control instead of flags in conquest.
J

What in the absolute fuck are the point of these trailers, they generate 0 hype serve zero purpose it's mind boggling that they haven't learned shit from the disaster of a trailer that was bf5.
Why waste time, money and resources on this

...seriously lads, if this shit is still impressing you in 2021, it's time to have a word with a nice adult who can help you across the road.
Click to expand...

What were you expecting for an FPS shooter? Did you somehow think it was some intellectual third person story game?

is this shit supposed to excite me...? Show me actual gameplay you cucks.

Man their CGI team is killing it!

Guess the reveal isn't until next week then.

Sir, let that shit go. I enjoyed well over 400 hours in BFV, never gave a fucking shit about any of that crap. BF 2042 is a day 1 for me for the MULTIPLAYER, they could have shown 100 Cyborgs Virtue Signaling with 100 Samurai Swords and I wouldn't give a shit. This is a video game, not a fucking documentary or history book lol Using your logic, you should be more pissed, Cyborg arms? Sir, they got fucking robot dogs and shit, tornados and people flying lol

If you are looking for some military sim, you in the wrong place. Enjoy Battlefield for what it is.

Why do they bother with these worthless pre-rendered, in-engine trailers every year? Just give us unedited, gameplay footage.

Also introducing Season pass for every 3 month. Free and Paid.
Reminds me of Destiny

because they work. same with cg trailers. or do you think you are smarter than a billion dollar company?
Last edited: Jun 9, 2021

DICE's "in engine" footage is the least representative in engine footage around, go look at star wars squadrons prerelease "in engine" then look at gameplay.
Click to expand...

Tsaki said:
What a stupid trailer that was. Trying to be more over the top than COD it seems.
Click to expand...

Well, to be honest Battlefield as a series was always more over the top than COD with its gameplay. But then COD added vehicles, etc.

I loved back when the differences between both were much more obvious, they're too similar to one another these days.

I'm in regardless as I've always been a fan of Battlefield, and I want a new good one to fix the mess that BFV was. Hoping the best for this, but we'll see how it pans out.
Last edited: Jun 9, 2021

Also gameplay will be revealed on xbox conference and potentially day one gamepass. Disgusting!

looks better than pixar in my opinion
R

Just confirmation that it will be at the xbox event
Last edited: Jun 9, 2021

Its for the masses to build excitement 'yo look at this, pew, pew, looks rad man!'.
Its the same with movie trailer, they have the same format. Can you imagine if instead of this format, movie trailers were just a 2min scene from the movie?, it wouldnt have the same effect.

They are marketing a fucking multi million dollar game..... You are still going to get that gameplay footage, they still need to market, advertise, get people excited and or hype to move units. I see zero benefit to them NOT having a hype trying in engine showing off all the features in a cinematic way. Most are there for the MP, they want ot see those MP features......if we can see them in a cool ass trailer, I see nothing against it as WE STILL get a gameplay trailer after.

Why not both? So I'm pre-ordering this bitch day 1, doesn't sound like that trailer is "worthless" to me if my reaction is to already look forward to playing it day 1. So....if you own a business and someone is saying "DAY 1" from a trailer of your rivals, I'm sure you'd also start looking to market that way too. This is still a business. I get how in engine footage can be used against consumers, but this publisher and developer has rarely ever done that to deceive or something, Ubisoft might be the biggest publisher to do that and even they don't do that anymore, so I don't see the harm as we still get a gameplay demo later anyway. Everyone wins.

Stuart360 I'M SAYING! As a film lover, I love some fucking great scenes, but not everyone is like that and even I would question this way of marketing a movie. Give me taste, give me a summary without spoilers etc. Just cause I love a film, doesn't mean the exact parts I love, I want marketed that way. Only in context can I enjoy such a thing. So I agree, this is to build excitement and holy shit that trailer was hype! Tornados, robot dogs, people gliding, snow mobiles....day 1
Last edited: Jun 9, 2021

Loving the TENET inspired soundtrack btw (and some shots seem like they were heavily inspired by the last third of that film as well).

SantaC said:
Game engine footage is not CGI. Learn to tell the difference.
Click to expand...

Fair enough, but I think you get my point.

Yeah the music part of the trailer worked for me. And all the tech stuff and all in real time. Good barometer for what's to come.

...seriously lads, if this shit is still impressing you in 2021, it's time to have a word with a nice adult who can help you across the road.
Click to expand...

So what should impress in 2021 sweetheart?
You must log in or register to reply here.