Call of Duty has a long history of imbalanced, infamous guns that tarnish the multiplayer experience. Let's take a look at some of the series shining examples.

Call of Duty has a history of broken guns throughout the years. Guns that are way too powerful that require patches to fix, or guns that are so weak and flawed that we wonder why it was added into the game at all. While we look back on some of them with rose-tinted glasses, others we wish we could forget. As time goes on, developers are quick to hear the Call Of Duty community’s outcry for guns that need fixing, but this wasn’t always the case, especially in the series’ heyday. Here’s our list of the most broken guns from Call Of Duty 4 to 2019s Modern Warfare.

The HS-10 shotgun from Black Ops 1 seems like a fun addition to the gun roster, but aside from its flashy looks, the HS-10 was barely functional. The range was low, the ammo count was weak, and dual-wielding them did nothing to help. Next up is the Grau 5.56 from 2019’s Modern Warfare. For a while, this gun was the king of Warzone. It was steady, deadly, and could pick people off from several meters away. Reminiscent of the ARC from MW2, the Grau was eventually patched in numerous ways. That being said, it’s still a very popular choice for Warzone players. Going back to MW2, the UMP45 is a nasty submachine gun from a time where patches happened less often. Easily the most popular submachine gun, the UMP has a quick time to kill and can be enjoyed akimbo! Normally that means less control with your aim, but it works surprisingly well...too well… Modern Warfare was also responsible for the snake shot .357. This deadly sidearm became a primary thanks to its kill range, and high damage snake shot ammunition. Like the Grau 5.56, it was nerfed, but not forgotten. After the awesome weapons offered in MW2, Black Ops felt lackluster in comparison.

Next, we jump into the future! Advanced Warfare’s BAL 27 was a quick fan favorite at launch. Once word got out about its outlandish fire rate and time to kill, the BAL was patched within a month. Even with its quirk of increased fire rate over time, the patch’s damage had been done. Next is the Dragunov. No matter what Call Of Duty game you’re playing the Dragunov does you no favors. It has high recoil and low damage: A deadly mix that no player enjoys. You’ll lose gunfight after gunfight using this ancient weapon with no benefits. A prime example being the HK-10 light machine gun. This underwhelming gun has bumpy recoil, low ammo count and few attachments to make it better. Trust us when we say, any other LMG would work better. Next is the FMG9 from Modern Warfare 3. This rapid-fire machine pistol will melt enemies at short range. Even at a distance, the FMG9 has the potential to win fights against submachine guns and even some shotguns. Another classic broken gun is the Desert Eagle from Call Of Duty 4. With its low recoil and high damage, this was a popular choice as a primary weapon. We also can’t forget that iconic sound. Last but not least is the infamous and iconic Model 1887 from MW2. Straight from the golden era of COD, the model 1887 was an overpowered mess with way too much range. Using it akimbo was destructive and memorable. When you think of broken, overpowered guns in Call Of Duty, you’re probably picturing these bad boys.
Click to expand...

The Bloody-Nine said:
The VMP in Black Ops 4.
Click to expand...

And in Black Ops 3.
Reactions: HaveButOneLife

Model 1887 akimbo was god mode
Reactions: The ninja farmer, Halo is Back, RPSleon and 6 others

Most new Black Market weapons in BO3 were blatant pay to win. Some of them were shit but on the most part they were OP as fuck, especially in MX Garand.

Grau, Bruen and Jak are/were OP in MW and make the game somewhat pay to win considering you can unlock them or their blueprints much faster with the battle pass / tier skips. Oh, and the SPR pre-patch was hitscan for some fucking reason, not really sure how they fucked that up.


I honestly feel bad for people who play warzone without owning the BP/Multiplayer.
Last edited: Nov 3, 2020

Ahh, akimbo 1887's. Damn i miss MW2 in it's prime
Reactions: The ninja farmer, Full Recovery, SlimySnake and 6 others

My buddy and I play CoD WW2 now and then and the shotguns in general seem really OP in that game, particularly with the incendiary ammo.

yunkaiza said:
And in Black Ops 3.
Click to expand...

I think it's worse in 4. One of the most blatant pay to win weapons I've seen. Fucking thing will melt an assault rifle user from range in a gun fight. It's comical.

The crossbow is worse but at least it's harder to use. It should be a specialist.
Reactions: yunkaiza

The Bloody-Nine said:
I think it's worse in 4. One of the most blatant pay to win weapons I've seen. Fucking thing will melt an assault rifle user from range in a gun fight. It's comical.

The crossbow is worse but at least it's harder to use. It should be a specialist.
Click to expand...

Shit, I had no idea it was locked behind crates in BO4. Never bothered with the game. Not surprising tbh.

Different guns have been OP throughout all of the COD titles.

At #4 on the list, I wouldn't consider the Grau "broken" in the current Warzone/MW meta. Kilo, M13, and Grau are all viable options in the rifle space. M4 isn't bad either but could use just a slight buff. A handful of SMGs, Snipers, and shotguns also very usable.

yunkaiza said:
Shit, I had no idea it was locked behind crates in BO4. Never bothered with the game. Not surprising tbh.
Click to expand...

It's so OP that when they introduced the free weapon bribe it was my selection. And it's so OP that I barely use it. It's easy mode.

No MP40 from world at war? Thing was a beast.
Reactions: Bumblebeetuna, TKOFromTokyo and massivekettle

The 725 shotty in MW 2019 on release was hilarious. Sniper rifle range. They've nerfed it a bunch of times but apparently it's still OP.
Reactions: Nikana and The ninja farmer
M

I concur. Where is the MP40? It was BY FAR the best weapon in WaW.

Also, where is the MW2 OMA Noobtube?

The 725 in MW was pretty overpowered for the first month or two before being patched. Same with the SP-R 208 which was a hitscan (no bullet drop) 1 OHK marksman rifle with amazing ADS speed - though was patched in 2 weeks. Wouldn't surprise me if IW did this on purpose to increase Battle Pass/packs sales.
Last edited: Nov 3, 2020
Reactions: yunkaiza and GametimeUK

Dunno if it's broken or not, but I'm way more successful with the Bechowiec in WW2 than any other gun. It's just crazy how effective it is, even on a distance. 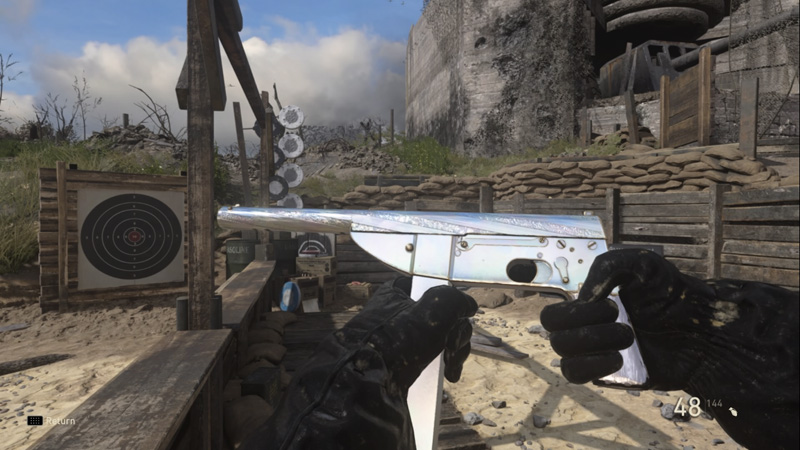 EverydayBeast said:
Let’s not act like the M16 with a scope in COD4 isn’t OP
Click to expand...

Yep. Weird how these two are omitted.

Not sure if it was in MW2 but the FAL was so dirty, loved it.

It's not broken, but White Phosphorous in MW is great at triggering people who would never even play the game.
Reactions: The ninja farmer

It was and utterly miserable too.
J

If you ask a streamer the most broken gun is the last one that THAT CHEATER JUST USED GRRRR.... FUCK THIS GAME *throws controller* .
Reactions: Arkam

The Bloody-Nine said:
The 725 shotty in MW 2019 on release was hilarious. Sniper rifle range. They've nerfed it a bunch of times but apparently it's still OP.
Click to expand...

Came to say this. That gun was stupid and hilariously OP. They tried to nerf it but it still was stupid OP after a few nerfs. Using that thing the first couple weeks of that game was fun just to dick around with and snipe people 30 feet away.

Cold War.....pretty much any sniper rifle
Seriously they should just rename this game quick scope tea bag simulator.......sooo many snipers

Nothing from world war 2! This COD was very good

Noob tubes in MW2 thanks to one man army or the Javelin with the suicide bomber glitch.

Ill take, "all of them" for one thousand Alex.
Reactions: MoreJRPG

725 in MW was a joke. The Aug in its current state in Cold War is completely broken. MW2 the noobtoobs with Danger Close, the ump45 and Famas were a problem. Same with the Models. before they patched them.

Honourable mentions are the MP40/Jugg combo from WaW and the BAL from Advanced Warfare especially when you got that variant I forget what it’s called.

Away with the fairies

UMP45 should be #1, just because you could out range a sniper, while silenced.

Honey-badger should have made an appearance. Ghost was the best COD since MW2. come at me.

I’d put the Type 95 from MW3 on that list. The burst weapon was heavily regarded as OP back in the day for being a straight laser.

Also FMG9’s akimbo only needs to be #1

Oh and any non semiautomatic snipers from Black Ops 2(which is two I think) were Quickscoping machines.
Last edited: Nov 28, 2020
Reactions: Slings and Arrows

Imagine if BO1 had Dragon Breath in MP
A

Boswollocks said:
UMP45 should be #1, just because you could out range a sniper, while silenced.

Honey-badger should have made an appearance. Ghost was the best COD since MW2. come at me.
Click to expand...

Ghosts was so bad. Only think i enjoyed about ghosts was the michael myers event and the snoop dogg narration.
Reactions: Slings and Arrows
S

I mostly played hardcore because of juggernaut, it's a joke in that mode.

a cave outside of Whoville.

In the new one, the M16 and AUG are both so brokenly overpowered that they are banned from competitive play.

You get killed by those guns and think you were sniped or one-shot by a shotgun up close. But no...you were just sliced apart by a single 0.01 second burst at any range whatsoever by one of those rifles. They are so broken.
Reactions: Nymphae
S

Away with the fairies

Calverz said:
Ghosts was so bad. Only think i enjoyed about ghosts was the michael myers event and the snoop dogg narration.
Click to expand...

Online on PS4 was great

Boswollocks said:
Online on PS4 was great
Click to expand...

Opinion Trailer Nobody Is Happy With Call Of Duty Right Now