Before getting down to business, let us first acknowledge that this game features greatest opening song of all time: 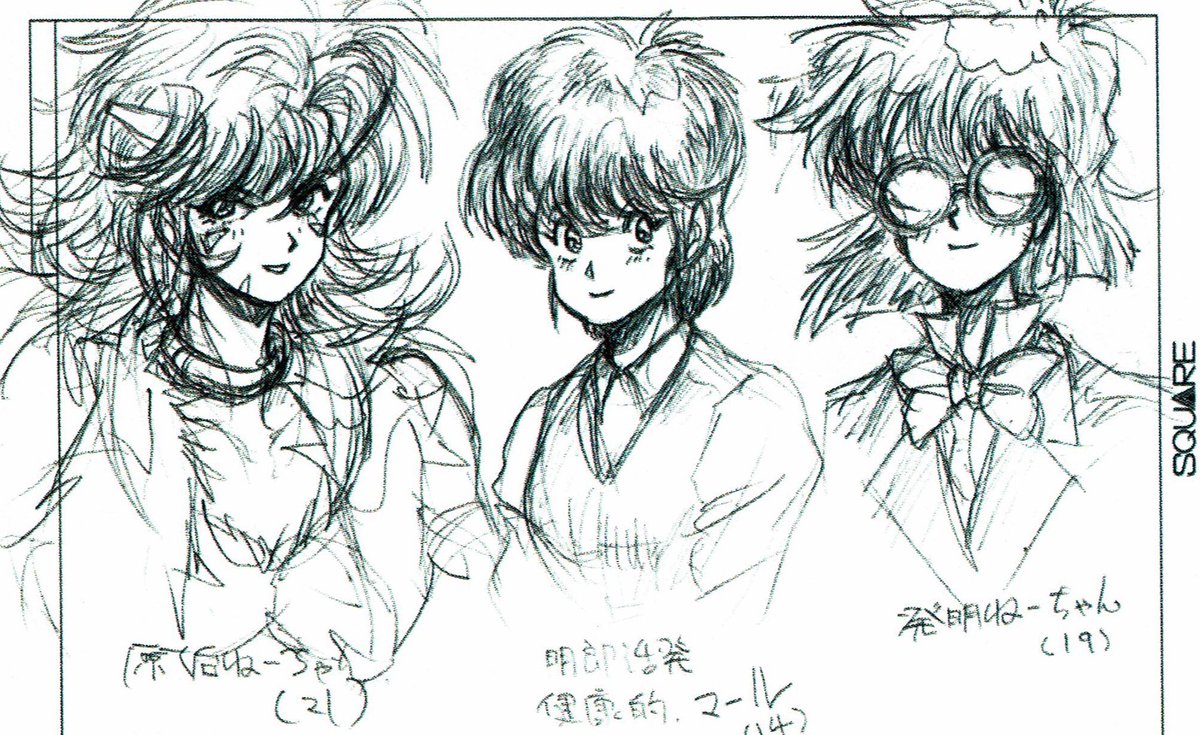 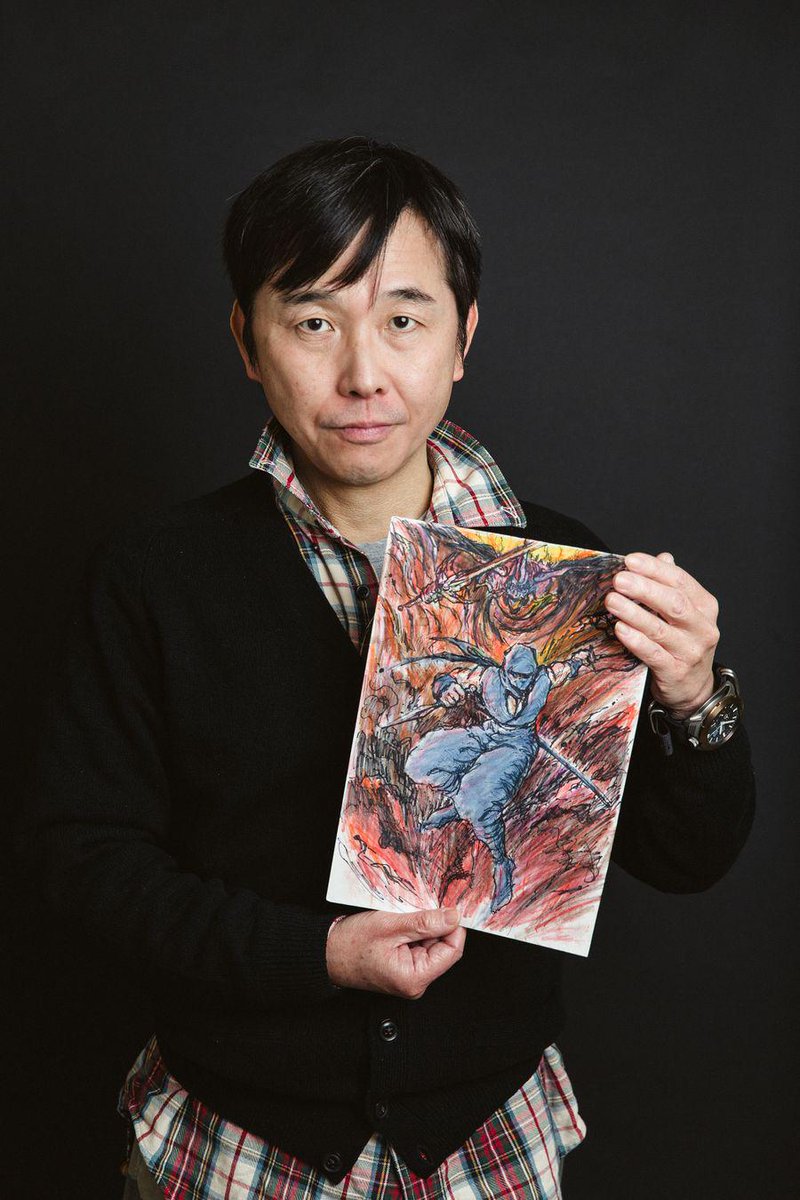 Chrono Cross was written and directed by Masato Kato, who was one of the co-writers for Chrono Trigger, Final Fantasy VII and, earlier in his career, the main artist for TECMO's Ninja Gaiden series. Cross was the only game Kato directed while at Square. A sequel that expands upon and subverts many of the story beats of the original game, Cross was met with both critical acclaim and derision. It got a 36/40 score at Famitsu, a 98% by EGM and a whopping 10 out of 10 by Gamespot (at the time only the third game ever to net a perfect score) but was derided by sectors of the fan base for being too far a departure from the original game.


The Music​
​
Yasunori Mitsuda, Trigger's main composer and a personal friend of Kato, returned and wrote what is recognized even by the game's bitterest detractors as one of the greatest game soundtracks of all time. It has been performed by world-class orchestras in Europe and Japan, and been extensively covered by indie ensembles in over fifty countries. Accounting for what was one of the most stressful periods in Mitsuda's life, many of the tracks were composed while he locked himself away - he alleges that more than one of the signature songs came to him in his sleep. 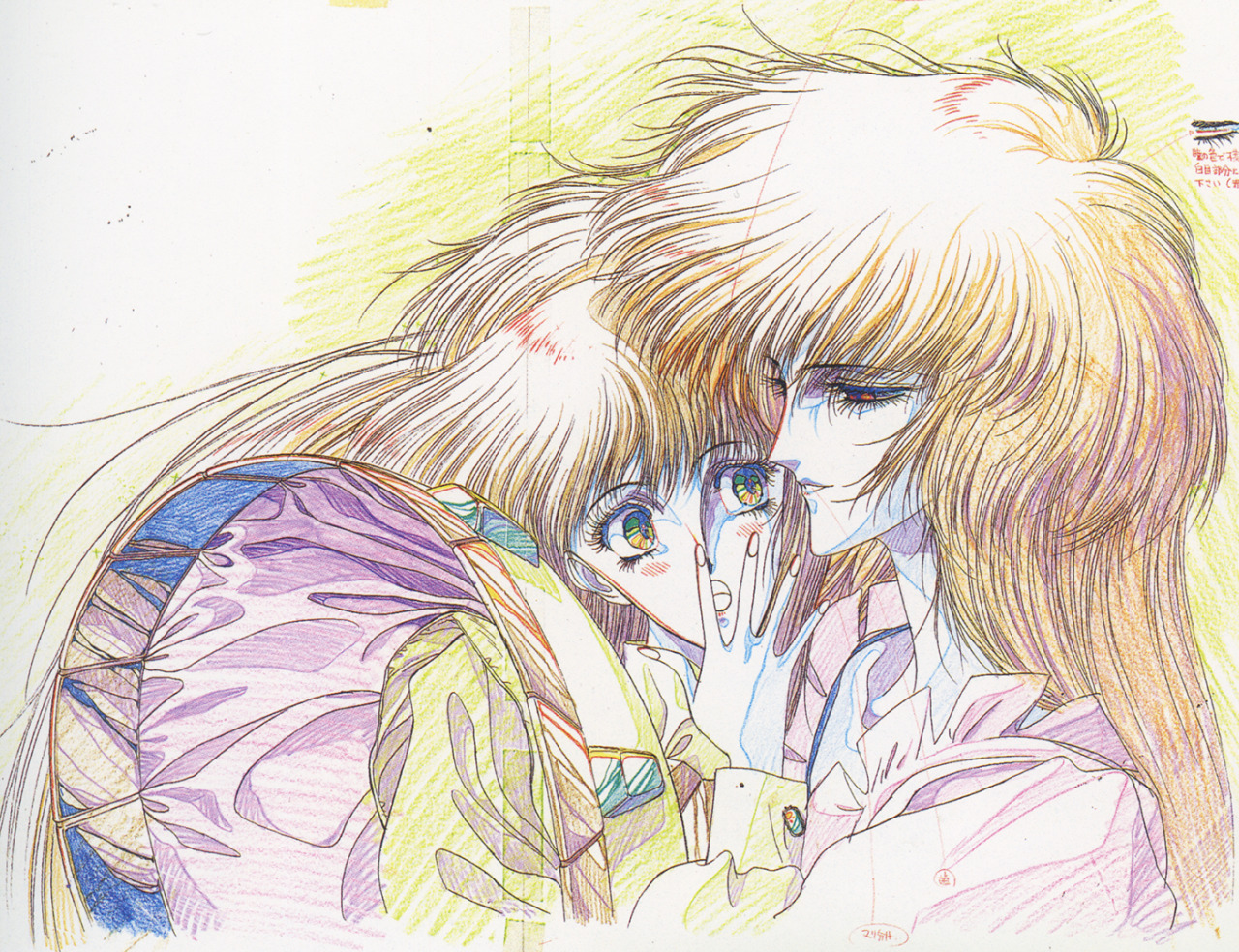 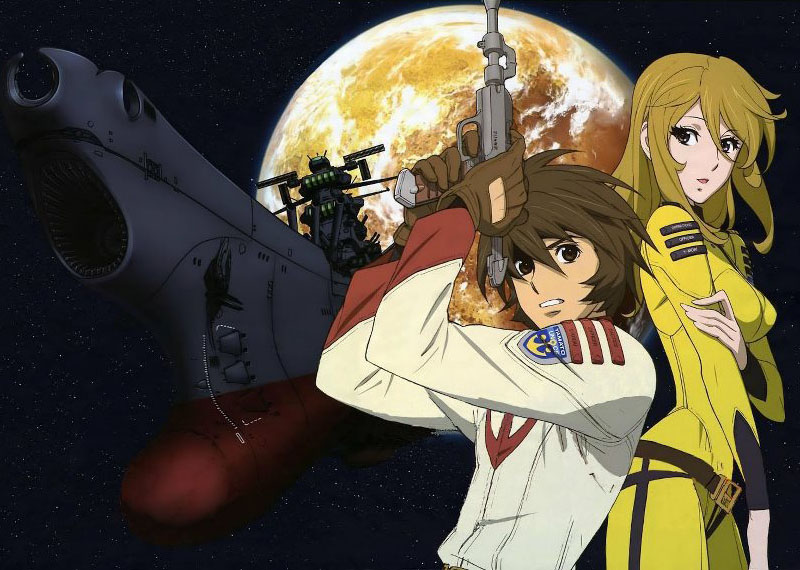 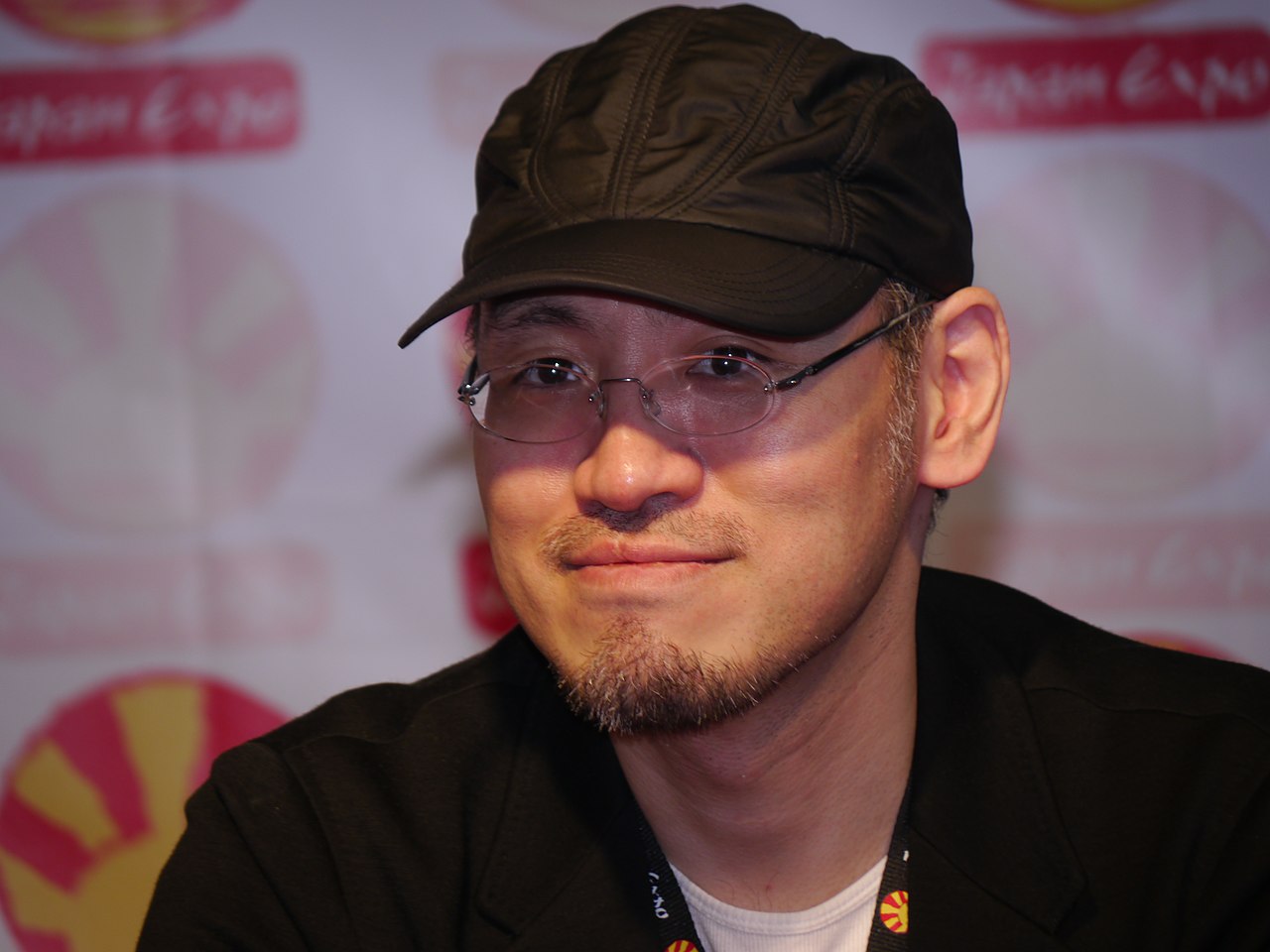 Abandoning the Dragon Ball-esque art of Toriyama, Kato chose Nobuteru Yuuki, the artist behind anime classics such as Record of Lodoss War as the lead character designer and artist for Cross. Adopting a more mature style so as to jive better with the game's darker tone. After concluding his work for Cross, Yuuki went on to design/animate many other classics in the industry, such as the remake of Space Battleship Yamato. 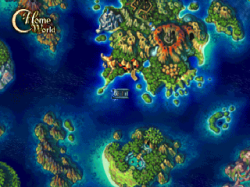 The game begins with Serge located in El Nido, a tropical archipelago inhabited by ancient natives, mainland colonists, and beings called Demi-humans. Serge slips into an alternate dimension in which he drowned on the beach ten years prior, and meets the thief, "Kid". As his adventure proceeds from here, Serge is able to recruit a multitude of allies to his cause. While assisting Kid in a heist at Viper Manor to steal the Frozen Flame, he learns that ten years before the present, the universe split into two dimensions—one in which Serge lived, and one in which he perished. Through Kid's Astral Amulet charm, Serge travels between the dimensions. At Fort Dragonia, with the use of a Dragonian artifact called the Dragon Tear, Lynx switches bodies with Serge. Unaware of the switch, Kid confides in Lynx, who stabs her as the real Serge helplessly watches. Lynx boasts of his victory and banishes Serge to a strange realm called the Temporal Vortex. He takes Kid under his wing, brainwashing her to believe the real Serge (in Lynx's body) is her enemy. Serge escapes with help from Harle, although his new body turns him into a stranger in his own world, with all the allies he had gained up to that point abandoning him due to his new appearance. Discovering that his new body prevents him from traveling across the dimensions, he sets out to regain his former body and learn more of the universal split that occurred ten years earlier, gaining a new band of allies along the way. [FROM WIKIPEDIA] 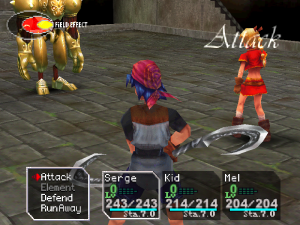 ​
The Element system of Chrono Cross handles all magic, consumable items, and character-specific abilities. Elements unleash magic effects upon the enemy or party and must be equipped for use, much like the materia of 1997's Final Fantasy VII. Elements can be purchased from shops or found in treasure chests littered throughout areas. Once acquired, they are allocated to a grid whose size and shape are unique to each character. They are ranked according to eight tiers; certain high level Elements can only be assigned on equivalent tiers in a character's grid. As the game progresses, the grid expands, allowing more Elements to be equipped and higher tiers to be accessed. Elements are divided into six paired oppositional types, or "colors," each with a natural effect. Red (fire/magma) opposes Blue (water/ice), Green (wind/flora) opposes Yellow (earth/lightning), and White (light/cosmos) opposes Black (darkness/gravity).Each character and enemy has an innate color, enhancing the power of using same-color Elements while also making them weak against elements of the opposite color. Chrono Cross also features a "field effect", which keeps track of Element color used in the upper corner of the battle screen. If the field is purely one color, characters are able to unleash a powerful summon element at the cost of one of the player's stars. The field will also enhance the power of Elements of the colors present, while weakening Elements of the opposite colors. Characters also innately learn some special techniques ("Techs") that are unique to each character but otherwise act like Elements. Like Chrono Trigger, characters can combine certain Techs to make more powerful Double or Triple Techs. Consumable Elements may be used to restore hit points or heal status ailments during or after battle.

Another innovative aspect of Chrono Cross is its stamina bar. At the beginning of a battle, each character has seven points of stamina. When a character attacks or uses an Element, stamina is decreased proportionally to the potency of the attack. Stamina slowly recovers when the character defends or when other characters perform actions in battle. Characters with stamina below one point must wait to take action. Use of an Element reduces the user's stamina bar by seven stamina points; this often means that the user's stamina gauge falls into the negative and the character must wait longer than usual to recover. With each battle, players can enhance statistics such as strength and defense. However, no system of experience points exists; after four or five upgrades, statistics remain static until players defeat a boss. This adds a star to a running count shown on the status screen, which allows for another few rounds of statistical increases. Players can equip characters with weapons, armor, helmets, and accessories for use in battle; for example, the "Power Seal" upgrades attack power. Items and equipment may be purchased or found on field maps, often in treasure chests. Unlike Elements, weapons and armor cannot merely be purchased with money; instead, the player must obtain base materials—such as copper, bronze, or bone—for a blacksmith to forge for a fee. The items can later be disassembled into their original components at no cost.

Best OST ever composed. The game itself, also pretty good. Liked it a lot. In fact, a bit more than CT.

But this performance... idk. Not biting right away. Radical Dreamers has long been fan translated and I thought it was kind of trash.


solid take on the another world theme

I'm a little disappointed that performance seems lacking on Switch, so I'm still on the fence about this remaster myself.

Great OT! I'm personally waiting for a physical release, but will jump in when that arrives. I hope I'll like, since I never could get into Chrono Trigger as much as I tried. This looks to be different enough though, so here's hoping.

This is one of those games that sits deep in my soul.

Had this on import on the PSX, never got round to completing maybe this time round.
Good game from what I played, very PSX Final Fantasy.
Looks alright, but I'm still baffled how SE hasn't discovered AI Upscaling

This was a legitimately great OT. Actually learned a bit about the game and was fun to read through.

Waiting for Steam Deck compatibility here. Also gonna give them time to fix up those performance issues.
C

Chronos Cross has the best game ost of all time.

Ready to give this a go , but not sure whether to bite now or wait a bit if there are performance issues

Nobuteru Yuki was the Escaflowne character designer btw. Love you uses the pic of how he drew the FSS protags. His style has a certain fragility to it.

Was planning on starting it this weekend but might wait for the FPS fix.

Sadly with the treatment SE did with this masterpiece

jshackles said:
Waiting for Steam Deck compatibility here. Also gonna give them time to fix up those performance issues.
Click to expand...

According to a lot of reviews, steam reviews, and steam forum posts - the game has horrible frame pacing issues and screen tearing.

Game also appears to be running on some sort of weird .Net abstraction layer that is throwing errors on Steam Deck.

jshackles said:
According to a lot of reviews, steam reviews, and steam forum posts - the game has horrible frame pacing issues and screen tearing.

Game also appears to be running on some sort of weird .Net abstraction layer that is throwing errors on Steam Deck.
Click to expand...

Interesting. Probably looks pretty rough considering the original version was locked at some 15 fps to begin with or something thereabouts. I haven’t had a chance to play yet and see it myself.

I was gonna grab this on Switch unless there its a good reason not to compared to the bigger consoles. Any thoughts?
E

I've played it a bit until the Opassa beach and I'm statisfied with the work on the backgrounds.
You can tell it's not the blur filter used in FF7/8/9 but they used some form of AI with manual tweaks.
The refined 3D models also look really good (it's funny because that's how I remember them to look 20 years ago but if I change to classic....I realize that's not the case ).
There are the usual QoL tweaks to speed up/avoid/increase stats during battles.
Frame rate is bad (PS5 BC here), you can feel the slowdowns and they are sudden and erratic, just like they happen when an emulation layer is involved.
It's a really slow game so nothing game breaking to me but they should improve it.
Last edited: Apr 8, 2022

Elios83 said:
Frame rate is bad (PS5 BC here), you can feel the slowdowns and they are sudden and erratic, just like they happen when an emulation layer is involved.
Click to expand...

It runs like absolute ass on the Switch, though other than that it's a pretty good remaster. The performance issues are infuriating since I played the PSX version for years on my Vita with no issue whatsoever.
S

So we're over a month in without a performance patch and the PS5 version still drops to 12 FPS at points?

Shifty1897 said:
So we're over a month in without a performance patch and the PS5 version still drops to 12 FPS at points?
Click to expand...

Is there any fix yet from SE?
S

I didn't buy it, been waiting for a patch. SE better be glad I didn't buy it day one, I would have gone full Karen over this "remaster".

Shifty1897 said:
I didn't buy it, been waiting for a patch. SE better be glad I didn't buy it day one, I would have gone full Karen over this "remaster".
Click to expand...

Bullet Club replied
May 7, 2022
Brigandine: The Legend of Runersia coming to PC on May 11