Dave Chappelle: Sticks and Stones | Out Now on Netflix 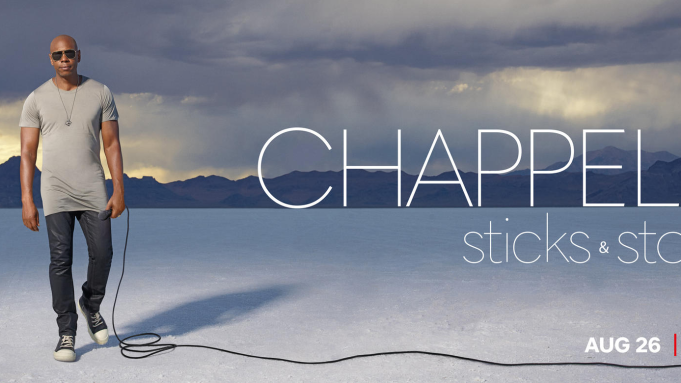 Not long after making his Broadway debut, Dave Chappelle is returning to Netflix with the premiere of his latest stand-up special very soon — we’re talking less-than-two-weeks-from-now soon. The streaming network announced today that Chappelle’s new special, Sticks & Stones, will drop on Monday, August 26. It marks Chappelle’s fifth Netflix special so far, following Deep in the Heart of Texas andThe Age of Spin in early 2017 and Equanimityand The Bird Revelation, which were released on New Year’s Eve at the end of that same year. 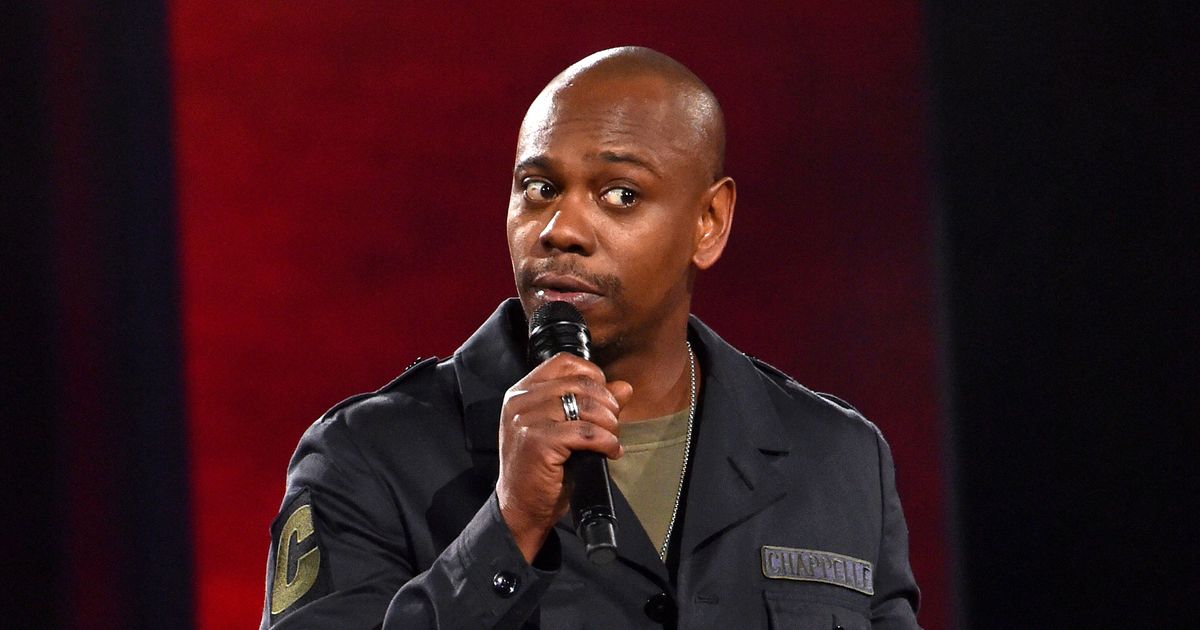 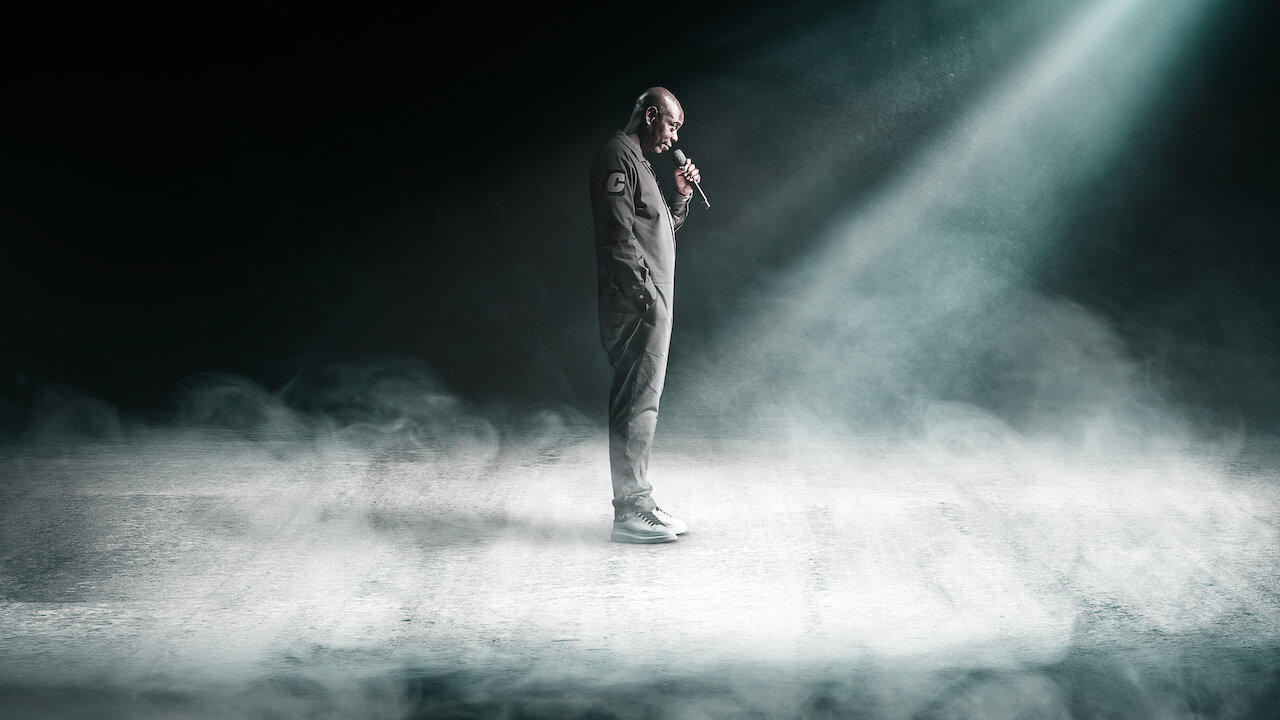 Dave Chappelle takes on gun culture, the opioid crisis and the tidal wave of celebrity scandals in a defiant stand-up special filmed in Atlanta.

God is back. I still cannot believe I got to see him live.

I was 25 min in before I just drove to work and Ill watch the rest at lunch but I love it so far. The world needs comedians to keep us from Taking ourselve too fucking seriously and Dave is brilliant at it.

About time! Can't wait to watch it

Theres an extra 22 mins clip that plays after the Netflix show. It's a great epilogue to end the special.

AfricanKing said:
Theres an extra 22 mins clip that plays after the Netflix show. It's a great epilogue to end the special.
Click to expand...

Dave is the one that made me love standup comedy. Yes there was Richard Pryor before but Dave and Fluffy made me fall in love with standup comedy. Thanks for the heads up my g

He's hilarious. I will watch, even though the forced liberal propaganda is cringe-worthy

Super Mario said:
He's hilarious. I will watch, even though the forced liberal propaganda is cringe-worthy
Click to expand...

Is he leaning harder left now?

looking forward to this. can't wait.

Dave is legit woke, like his parents are professors and stuff who were politically active, Pete Seeger was regular visitor to the family house, etc. he just is not a crazy SJW who attacks others. he's more old school woke like Richard Pryor or George Carlin.

tbh if you are a fan of Chapelle at this point in time and think he is doing "forced liberal" you must be entirely clueless on this man. i recommend reading an interview with him.
Last edited: Aug 26, 2019

This was fucking gold.
I

i think dave has a film crew at all his shows that videotape his performance. this is all possible since he bans the audience from bringing in their cellphones.

God dammit Dave killed it once again! He went hard as a mothafucka!

*slaps knee with mic*
Can't wait to watch this tonight

Oh shit. Thanks for the heads up

AfricanKing
this should be great

Super Mario said:
He's hilarious. I will watch, even though the forced liberal propaganda is cringe-worthy
Click to expand...

I'm about 5 minutes in and he's already going after the SJW job lynch mob seems like so. uhhh....?

I watched about 15 minutes. Didn't find it that funny, but it made me want to watch Delirious again, which I find hilarious. So I did that.

I thought it was hilarious.

Better than his last Netflix special.

People on Resetera are whining and that's what I like to see.

That was amazing!
His story about home defense was hilarious!!!
*Clack*Clack*
He is still absolutely incredible.

Chappelle is no question, a genius, savvy comedian and creates something out of nothing. I admire his roots, and standing tall from the culture he emerged from and nobody should be trigger by his material BECAUSE it's comedy.

There is a hidden ending, apparently. You need to watch the whole thing from back to forth uninterrupted.

DForce said:
I thought it was hilarious.

Better than his last Netflix special.

Someone was literally offended that another poster said “not for the easily offended” SMH. It’s getting ridiculous lol.

This shit is raw. Dave don’t give a fuck!

I only liked Charlie Murphy and Ashy Larry from his show. Sad those two never became as big as Dave.
I think I was in middle school when this came out. Or high school.
D

Other forum is attempting to cut him down. He's bigger than that stupid fucking forum. Sucks to be them.

Dirk Benedict said:
Other forum is attempting to cut him down. He's bigger than that stupid fucking forum. Sucks to be them.

Their mouthpiece has also spoken: https://www.vice.com/en_us/article/...ppelles-new-netflix-special-sticks-and-stones
Click to expand...

The comedian doubles down on misogyny and transphobia in both the special and the hidden bonus scene that follows.
Click to expand...

Sounds good to me!

brap said:
Sounds good to me!
Click to expand...

Watch the epilogue after...

Paraphrasing...
There’s a part where he said he was nervous with trans jokes because there was a transgender person in the crowd, but she was laughing at everything, jokes about others, in tears and having a great time. So when he did the jokes she was laughing more and then they talked backstage 1 on 1, and she thanked him for the jokes because she said, "the fact that you’re making jokes means you’re normalizing us."

TTOOLL said:
God is back. I still cannot believe I got to see him live.
Click to expand...

Wife and I saw him about 4 years ago? Can't remember now. Paid $200 a ticket, 3rd row from the front. Opening night.

I don't wanna say he bombed but it wasn't great. Had some friends see him a day or two later and said he killed so maybe his opening night he was trying to find his groove or something. Really turned me off from seeing him live again.

Haven't watched this special yet. Saw his other 2 Netflix ones and they're not bad.

The whole special is comedy gold.

Such a good special. He does a good impression of era in the beginning. They are throwing hissy fits about it lol

Why he wearing a garbageman's uniform?

Just finished it, I really enjoyed the special. If you are offended by any jokes you are such an idiot and just too sensitive. Cancel culture sjw need to stop trying to control the world around them, and we need more people like Dave to speak up.

Props to Chapelle. I think he’s big enough to withstand it, but he’s taking a serious risk saying this shit, both in current year and at the level he’s at in the entertainment industry.

As a result, the show was also fantastic. This is what pure, unfiltered comedy and personality looks like. It cut every which way with no favorites, and was undeniably Dave, nobody else’s influence, no dancing around PC.

A great watch for anyone who’s tuned out of modern ‘comedy’ and on-stage hot takes as much as I have.

This shit had me fuckin cracking up
WHOSE GOT ROPE

Just finished it, my favorite stand up since For What It's Worth.

Heard about the MJ jokes damn I got to see this

Absolute gold. His first specials didn't really feel like he was back at his peak, but man this fucking blew me away. I was in tears for most of it.

"Hillary walked by with her Steve Harvey suit"

Thought it was a great watch, that hour flew by.

Will rewatch as brain not used to awesome unfiltered comedy anymore.

The jokes about that French actor & the home alone kid were

. The lgbt car ride sounded like a great sketch also.

as a member of the alphabet soup his car analogy was spot on albeit a bit longwinded.

Really good show from Dave. Nice to see him go out and just give it to everybody. None of this only punch up nonsense.

The Tribe Has Spoken

Vice is telling me to skip it? Sounds like a glowing endorsement to me!

Will watch tonight with my wife.

Thanks Vice. Thanks Era.

He absolutely killed it, the alphabet car ride had me in stitches.

Great special and the epilogue really should've been the prologue because that is also gold standard.

That didn't backfire at all.
You must log in or register to reply here.