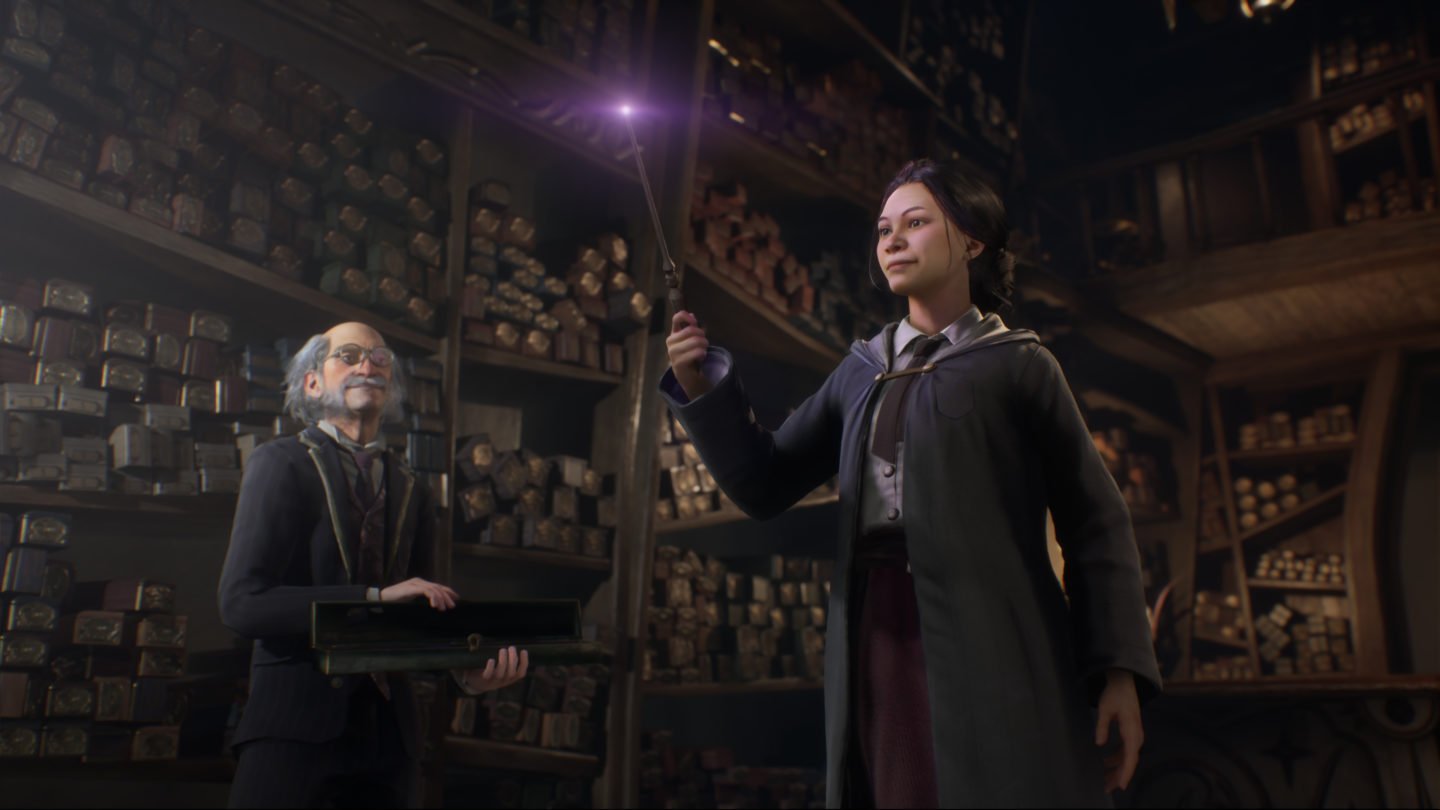 The contents of the Hogwarts Legacy collector’s edition and deluxe edition have appeared online.

As spotted by Reddit user u/BattleDashBR, hidden files on the Hogwarts Legacy website have been spotted that appear to show the various items included in the collectors and deluxe versions of the game.

It is unclear how long this file has been present on the website, however it is attached to links to large US retailers Best Buy and Game Stop, suggesting that the preorder campaign for these items could begin soon.

The majority of the items included in both editions appear to be cosmetics for use within the game. The trailers for the game have shown a wide range of customisation options, but it’s unclear at this stage if these items would be exclusive to these editions or simply early unlockables.

Mounts have been shown as part of the initial trailer and the recent State of Play, however, the Thestral, which is a skeletal horse only visible to people in the Wizarding World who have witnessed death, have yet to be shown as a mount. 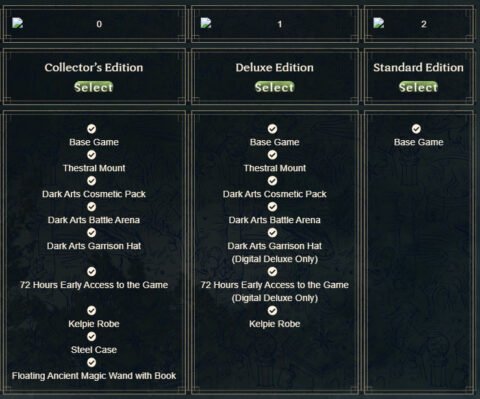 The collector’s edition also is said to feature a “Floating Ancient Magic Wand with Book”, which may be a physical item, as it’s not included in the deluxe edition.

In Hogwarts Legacy, the use of “Ancient Magic” is something unique to the player, allowing them to traverse through areas of Hogwarts untouched by normal students. The State of Play presentation suggested this would be the main crux of the game, so an item in the collector’s edition representing that would make sense.

The eagle-eyed members of the Hogwarts Legacy subreddit recently uncovered another secret seemingly hiding in plain sight, a look at the game’s UI.

As posted to the r/HarryPotterGame subreddit, menu elements appear for as little as a few frames.

Due to be published under Warner’s Portkey Games label, it was originally scheduled to be released in 2021 for PS5, PS4, Xbox Series X/S, Xbox One and PC.

However, last year Warner delayed the game’s release window to 2022. It recently reiterated plans to release Hogwarts Legacy this year (including a previously unannounced Switch version), along with WB Games Montreal’s Gotham Knights, which will arrive in October.

Do any of the editions include this outfit by chance? Ill preorder that version.

I was going to say INB4 trans comments, but it took less than 10 minutes so fuck.

Another cash grab for almost no additional content of value. Ubisoft would be proud.

This year then.
Or not.

I love the super random meaningless items in that collector's edition that nobody understands.

"Ooooo woow, a steel cage and a floating ancient magic wand with book? I gotta have that shit for sure, definitely pre-ordering the collector's edition.

That would be seriously awesome
N

Ugh. Can we let the woke/retarded stuff out of here?

Huh, that’s a weird piece of bonus content. I didn’t think they’d be willing to go there…

Nautilus said:
Ugh. Can we let the woke/retarded stuff out of here?
Click to expand...

Is the magic wand real or in game only?

Steel case with no physical disc again I'm sure, lol

They should have an option to include the game if they’re going to do that. They’d probably have to tack on an extra fee. Which is sad.

Nautilus said:
Ugh. Can we let the woke/retarded stuff out of here?
Click to expand...

So no battle arena for base game? Seems harsh.
T

osiris_128bits said:
So no battle arena for base game? Seems harsh.
Click to expand...

I was thinking that too, it’s an odd way to split it…

Elysion said:
Huh, that’s a weird piece of bonus content. I didn’t think they’d be willing to go there…
Click to expand...

Standard edition it is then.

if this game is good then i won't hesitate going all out on it. i'll throw my money at JK Rowling.

the thing is we won't know until post release so likely i'll grab the deluxe edition. i'm hyped for a new HP game but i'm going to wait and see what it's like first. avalanche don't inspire me with confidence as a studio

Xir Who Must Not Be Named!

imagine if JKR wasn't a TERF!!

Will be pleasantly (or not) surprised if this releases this year.

Maybe its me, but it doesn't look like just "cosmetics" to me.
I mean, Dark Arts Battle Arena? Is this a whole place for exclusivity?

I still have high hopes for this game to doesn't come with any form of stupid bullshit mechanics.

Kinda looks like the Collector edition is better than the Deluxe?

Anyway I’m gonna buy the priciest one to show support for their hard work.

Wow look at all that shit

This is missing an anthology of JK Rowling's most famous tweets, along with the angriest replies of the woke lunatics.

I can see reviews for this game being a complete shitshow.


I might have to buy two collectors editions out of spite.
O

Very unpresional from gamespot to do this

Seems like they already made up their mind before playing the game
Last edited: Jul 25, 2022

Airbus Jr said:
Very unpresional from gamespot to do this

All this because she said women menstruate. What a world we live in.

So I read the entire article... I would put TLDR for people but that would require the article to have substance.

Essentially this is using the game as an excuse to springboard to an article that the writer actually wants to write rather than their actual job trapped as a games "journalist". Essentially it is a "Arnt I enlightened?" For all their mates to read.

Literally nothing of value is said it floats around points that the writer believes should be obvious or everyone will already agree on, it is not the sort of article that should be on a gaming intrest site.

The closest I can draw is "trans good, JK Rowling bad".


Also yes... the writer is transgender, constantly plugs their transgender issues youtube channel, was hired in April and only writes about this for Gamespot. Rather than you know... games.
Last edited: Jul 25, 2022

You guys are wasting your time with autistic ramblings of a clown on twitter.
Its so moronic that even the twitter people is massacrating them.

Staff Member
Folks let’s stay on topic and not derail or give attention to the mentally deranged “journalists”.

Now sure if I can fit anouther collectors edition on my display... also with scalpers it's going to be a nightmare. I do kinda want it... I read the booked as a teen when they where coming out, I kinda have this feeling of nostalgia attached to them... seeing a potentially good creation of it within a game has got me a little excited.

What a pile of shite.

And to think this all really kicked of with some fucking horse armour.
You must log in or register to reply here.