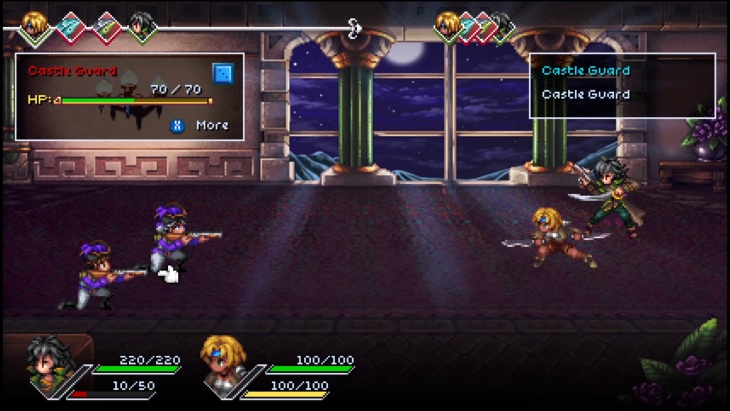 Dangen Entertainment and Stegosoft Games have announced Rise of the Third Power; promising to unite the beat of Japanese and western RPGs.

Rise of the Third Power launches Q2 2022 for Windows PC via Steam.

15 years after a terrible war, only two nations remained- Cirinthia and Tariq. However, a rebellious army grown from the discontented soldiers and citizens of the Arkadya have challenged the nations under the Treaty of Evenheart; too weary from the war to enforce it. Another great war is feared to be inevitable.

Power vacuums are still to be filled, and a party of eight heroes will be beset from all sides to prevent another war. All party members take place in battle simultaneously, and each piece of gear acquired acts as a permanent unique upgrade. The console style RPG promises to bring modern convinces, and the best elements of Japanese and western gameplay and writing.

You can find the announcement trailer below.

You can find the rundown (via Steam) below.

1587, 2A – 15 years have passed since the guns of the Great War at last fell silent. The conflict rocked the world, leaving half a generation of men and women lying dead on the battlefield. Of the many players that had acted on the world stage, only two remained: the kingdom of Cirinthia and the ancient Republic of Tariq.

In time, Dimitri Noraskov, a hero to the defeated Kingdom of Arkadya, rose from the ashes. He saw his king as a coward for surrendering, and a traitor for submitting to the Treaty of Evenheart. So did the people. They supported Noraskov when he overthrew the king. They supported him as he reclaimed the lands that had been stripped of them. And they supported him as he raised an army. Noraskov had theorized that the nations of the world were still too worn by the Great War to enforce the terms of the Treaty. Thus far, his gambit has proven successful.

The Arkadyan Empire shows no signs of curbing its aggression. It is feared by many that a reprise of the Great War, that at one time could have been prevented, is now all but inevitable. But there are those that believe it can yet be stopped…
Rise of the Third Power is a love letter to the glory days of the console style RPG, with modern conveniences such as auto-save and a combination of the best elements of Japanese and Western style gameplay and writing. Experience this fusion of East and West, old and new, in a game meant to surpass Stegosoft Games’ previous work in every way!
Source: Niche Gamer

Ara Fell was a decent attempt at a western JRPG, so I might give this a shot. In the end, it will all depend on impressions.

Meanwhile, this is making me think of RPG Maker shit.

Are those FFBE sprites?

I'm sorry, but this looks too much like an RPG maker game.

20 years ago, this would excite me. 20 years and many RPG maker games later, I can't help feel....apathetic.

Game might still be great though, so dont let me sullen words deter anyone if it's for you!

It's made in Unity. Their previous game Ara Fell was made in RPGMaker.

This one is a Kickstarter game that was funded a few years ago.
A

Labadal said:
Ara Fell was a decent attempt at a western JRPG, so I might give this a shot. In the end, it will all depend on impressions.
Click to expand...

I'll keep an eye out since Ara Fell is pretty decent.

This would have made a great collaboration with a German studio.

At least they don't call it a JRPG, so I guess there's that.

Hope this also gets a console release as well.
S

Is it BC?
You must log in or register to reply here.