JETT: The Far Shore for PlayStation 5 game reviews & Metacritic score: JETT: The Far Shore invites you on an interstellar trip to carve out a future for a people haunted by oblivion in this cinematic action-adventure. As scout Mei,...


Game is out tomorrow. 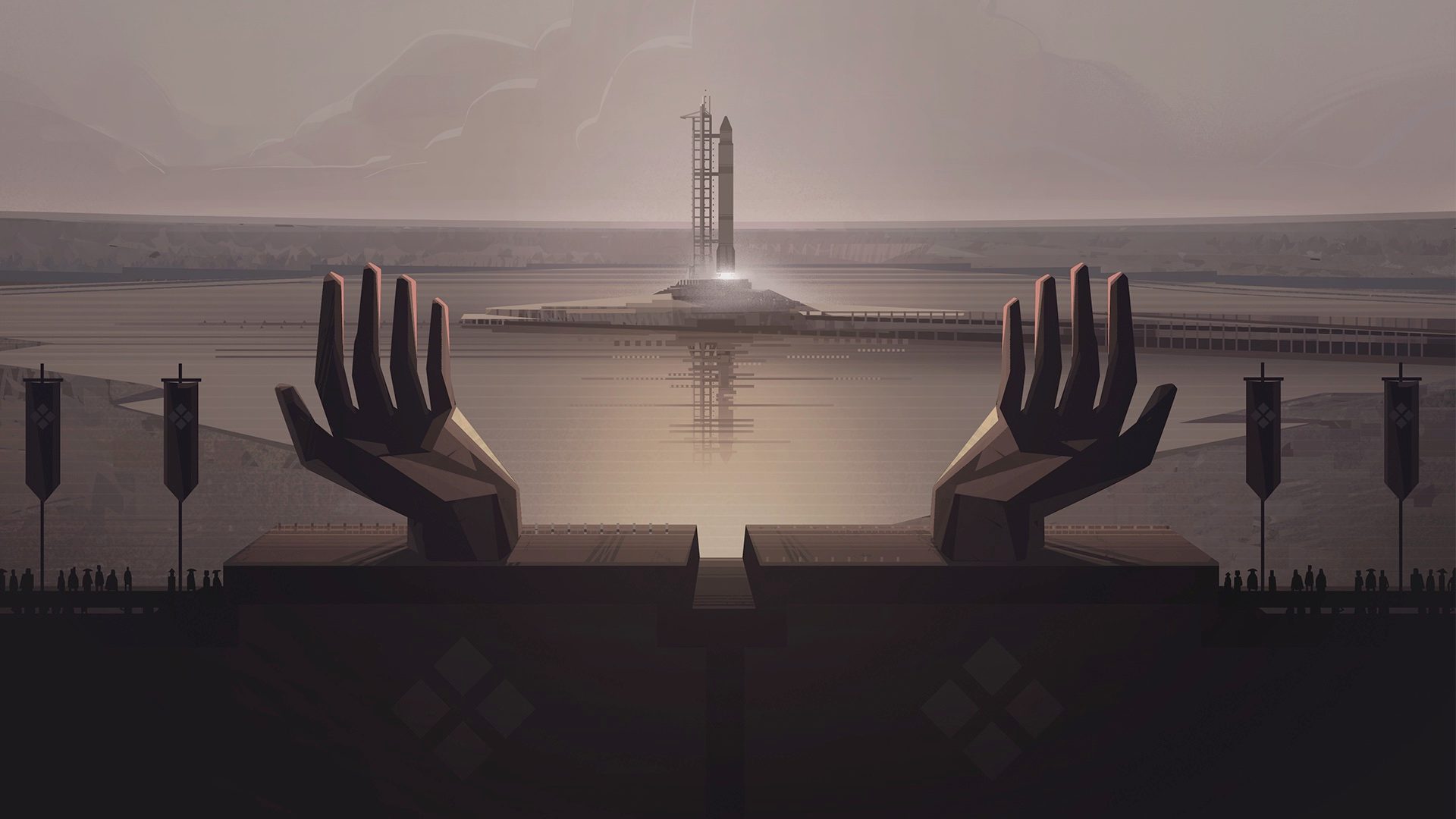 The thoughtful game structure of Jett: The Far Shore, out tomorrow

The game’s creator on building a new science fiction cosmos that feels finite and traversable.

Inverse 90
You can't outrun the sheer horror of existence, but Jett: The Far Shore lets you try. Its heavy narrative is a perfect complement to its exhilarating gameplay.

God is a Geek 80
JETT: The Far Shore is a cathartic trip that makes you feel a part of something special in such an unknown and beautiful new world.

Hey Poor Player 80
Jett: The Far Shore provides a truly otherworldly experience. With a unique look, stunning soundtrack, and a ship that controls like a dream, strap in and fulfill Jao's directive. Late game choices take the wind out of things a bit, but I still recommend taking a journey on the far shore.

IGN France 70
A pleasant game for anyone willing to explore its abstract universe and general design. The story does captivate, helped with a great audio, but the end feels like unfinished.
All this publication's reviewsRead full review

IGN Italia 70
JETT - The Far Shore is an adventure that, at its best, conveys a sense of absolute freedom to the player in the exploration of an alien planet. The setting is full of ideas ... and it is a pity that many of these are not fully developed during the story. From a stylistic point of view, the contrast between the minimal graphic style and the orchestral soundtrack is excellent and gives a unique character to the work.
All this publication's reviewsRead full review

SpazioGames 70
Impactful and unique, JETT The Far Shore is an interesting space adventure, contemplative and thoroughly unique.
All this publication's reviewsRead full review

Screen Rant 70
JETT: The Far Shore provides a solid experience with fantastic flying mechanics, interesting world lore and a keen grasp of the spectacle of space exploration.
All this publication's reviewsRead full review

Wccftech 70
Jett: The Far Shore is a stylish, fascinating, and challenging work of art that may inspire you to say some very naughty words. While it sometimes succeeds as a chill exploratory experience, iffy controls, poor navigational tools, and overly convoluted missions often harsh the game’s vibe. That said, if you’re the type that can appreciate a game for its world and message, despite some issues with its minute-to-minute gameplay, feel free to join the Jett set.

Player 67
JETT reaches for the stars, and it is tantalising to watch it do so. It’s a shame that the camera cuts away just as it looks like it’s going to get there.

Press Start Australia 65
What you will have to take note of, is the totally inconsistence frame rate. The game often chugs and gets choppy at certain points for no discernible reason, with some of the bigger set piece moments running fine, while regular exploration at high speeds can really have an impact on performance. I wouldn’t say it’s terrible, but definitely noticeable when they’re often unexpected, and happen often enough that you never truly forget about them.

Everyeye.it 63
It wasn't clear before release what Jett: The Far Shore wanted to be, which was as alien as its setting. Unfortunately it is not even now. It is a not at all veiled reference to the intuitions of No Man's Sky, but having adapted that playful structure to a narrative that exists and also has not indifferent apexes. The problem is almost entirely in the gameplay, which together with unresponsive controls transforms even the simplest of activities into a grueling struggle with the game system. A real shame, unfortunately, since the game was intended as a placid and relaxing experience.

NME 60
JETT: The Far Shore makes a good first impression with its retro sci-fi visual design and expressive flight model. But it’s difficult to connect with its story and your team when you have limited scope to make discoveries and supposedly dangerous events prove trivial to deal with. Only in the final stages does it let you spread your wings a little, and feels more powerful as a result.

Push Square 60
While it presents itself well and has some neat ideas, Jett: The Far Shore never launches into the stars. Flying around, soaking in the atmosphere, and gathering info on a foreign planet is relaxing fun, but it's scuppered by messy combat scenarios and a story that falls flat. You may get some enjoyment from this, as does have its moments — just don't expect it to hit the stratosphere.

GamesRadar+ 60
Jett: The Far Shore is a frustrating jaunt through space, with a stunning world and narrative let down by clunky, awkward controls.

Eurogamer Italy 60
JETT: The Far Shore is a space opera with a soundtrack so outstanding, an art compartment so beautiful, and a narrative premise so compelling that in the end it really hurts to find out that it's just an old-fashioned, “normal” video game. This team can and will create something a lot more compelling.

WellPlayed 55
JETT: The Far Shore has moments of brilliance, but they're buried under an overload of mechanics that aren't enjoyable and a general lack of polish. Similarly any philosophical value in its narrative ideas is ruined by needlessly obfuscated dialogue. There's something to be discovered here, but it's just not worth the trip.

Slant Magazine 50
Beautiful and elegant though it may seem on the outside, the game too often lets its stylistic tics drag the experience into varying degrees of frustration.

GameSpot 50
Jett: The Far Shore is at its best when you're speeding through the air and provided with the agency to figure out how to reach your destination, not slowly hovering around a space and having someone hold your hand through every step of a puzzle. Regular occurrences of the latter drag down the whole experience, and the overall narrative--though intriguingly set-up--ultimately ends in an unfulfilling way, with protagonist Mei feeling too detached from the story and the themes it's trying to explore.
Last edited: Oct 4, 2021

holy shit, review is lower than I thought.

The game looks super boring to me but wow.

That is unfortunate. I had high hopes for this one.

I never got what that one is about?

Kind of reminds me of Sable. Pretty art style at the forefront and laid back exploration, but an ultimately average game. Can still be enjoyable for the right price, and with the right expectations probably.
Last edited: Oct 4, 2021

Anyway, I'm still interested in playing this. The game looks beautiful and gives me Interstellar vibes.

Looks average, score makes sense. Music seems like a 10/10 though.

Jett the fuck out of here with these scores...

Thats disappointing to see but I'll still give it a go I think, its only £15.99 with PS Plus until 23:59 tonight. The music sounds amazing.

Reviews seem to say the dualsense support is really good I'm inclined to get it on PS5 more because of that even if they say the fps dips sometimes, might be even worse on PC.

Disappointing, but I wasn't expecting this to be widely loved. For those wondering this clocks in to about 10 hours to complete.

Did not expect this to review well after seeing some of the hands-on previews.
S

Is this a game with some sort of challenge or is it more an experience/walking sim type of game?

That first reveal when it looked like a cool ship exploring planet vibe was awesome. Once the land the ship and walk around part was revealed my heart sunk lol

Is anyone playing this?

This has been on my radar since the reveal but I kinda feel this game is sent out to die, 30 bucks seems pretty hefty considering how abstract the trailers have been. I mean, what even is this?

SJRB said:
Is anyone playing this?

This has been on my radar since the reveal but I kinda feel this game is sent out to die, 30 bucks seems pretty hefty considering how abstract the trailers have been. I mean, what even is this?
Click to expand...

I am. The beginning of the game gave me mega Interstellar and Ad Astra vibes but omg the gameplay is so ass it totally kills my joy. The on food segments are really short. Like 2 minutes or so.

Ultimately, whether you would like Jett or not depends on your personal taste. But one thing is for sure, it's not everyone's cup of tea. Jett features a vivid world to explore and a competent story paired with excellent visuals and audio.

There are some issues such as awkward controls and collision detection that mar the game down, but in the face of what it does right become nothing more than annoying nuisances. Superbrothers and Pine Scented Software have delivered a quality title with Jett: The Far Shore, and those with a liking for chill experiences like Journey or Abzu should definitely check it out.
Click to expand...

i am really enjoying this game so far. I've played for about 2 hours and especially the first like 60 minutes are incredible: a great sense of sadness, and wonder.

I've read people comparing this to Interstellar and I can definitely attest to that. The moment the rocket leaves the planet was amazing, visually very striking and a great soundtrack.

Gameplay is okay. A bit clunky at times. Atmosphere and narrative are key in this game.

One downside for me is that this is another game with made up language, which forces you to watch the subtitles because otherwise you have no idea what the hell is going on.

smart_brazileiro said:
I am. The beginning of the game gave me mega Interstellar and Ad Astra vibes but omg the gameplay is so ass it totally kills my joy. The on food segments are really short. Like 2 minutes or so.
Click to expand...

Thanks, I had been waiting on this one but I'll wait for a really deep discount before considering it now.

ultrazilla said:
Thanks, I had been waiting on this one but I'll wait for a really deep discount before considering it now.
Click to expand...

I honestly feel that 30 bucks is a mistake. 20 would've been way better.

Watched some of it deciding if I want to give it a try.
Starts great but then they constantly fucking speak. ALL THE TIME. In the weird annoying language. Delivery is super stiff too.
"HEY, FEEL THIS, FEEL THAT, LOOK AT THAT, IT'S BEUTIFUL, LETS REMEMBER THIS MOMENT, WE ARE THJE FIRST ON THIS PLANET, I FEEL"
Let me feel for myself. SHOW not tell. The intro is kinda amazing but it looks super boring and beating you over the head with religious and traditional tones.
And the subtitles?! If I am a native to their language, I should understand what they say... Just make it an accent.

I also just finished Exo one on gamepass and it was superior. Gameplay reminded me of tribes, it was short and unique.
Last edited: Nov 21, 2021
You must log in or register to reply here.