This continues Lara's 3rd person action adventure series reboot that started in 2013 with Tomb Raider, and it's sequel Rise of the Tomb Raider in 2015. 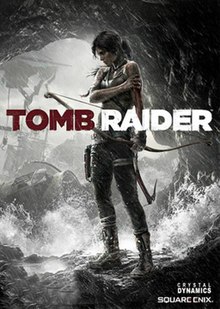 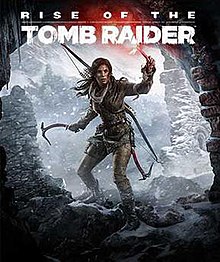 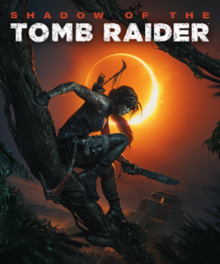 The areas that are improved in Shadow of the Tomb Raider from previous games are there's more puzzles to solve, some are easy some are hard but it was a pleasure playing through them in this traditional 15 hour game that's a break from your now normal 100 hour RPG open world games.

I loved the world of Paititi and how it gives you side quests, save points and marketplaces to upgrade, and manage weapons. It's something those 100 hour RPG open world fans will love.

The game in my eyes is a serious threat to Naughty Dog's Uncharted as there's no shortage of jaw dropping moments, puzzles and enemies to fight. 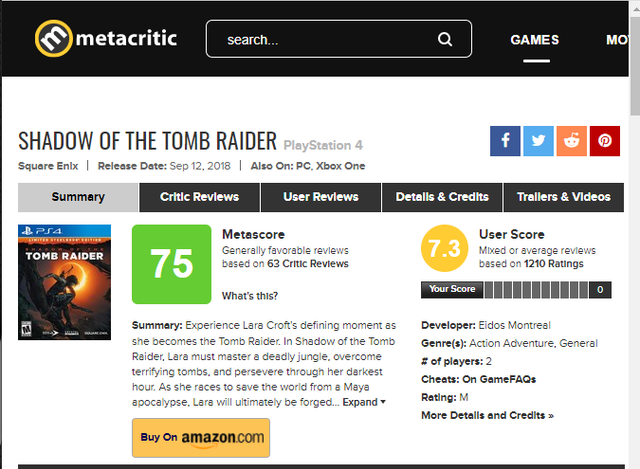 Shadow of the Tomb Raider has more puzzles yes but it's still an action machine, exploring the "ancient cities" has never been more of a thrill and I give it a B+. Brace yourself for a 13 hour game.

I spent more than 13 hours on it of course.

But hey, the new Tomb Raiders are pretty good games if you ask me.

I’m sure I’m part of a minority with my two cents, but this is likely tied with the first game in this series as my favorite.

I really enjoyed the focus on exploring over combat. I recall, once I hit the end game and they started throwing combat encounters at me regularly, almost feeling put-off because I had enjoyed the hours and hours I had spent just exploring, platforming and discovering.

while I don’t think this series gives Uncharted anything to worry about - they’re as different as they are similar - I enjoy quite a few things about the new TR trilogy’s approach.

The metroidvania-esque level designs, the exploration and platform/puzzles with Tombs. It would be a task to match Naughty Dog’s level of detail, diversity and scale while matching Tomb Raider’s more “open” and RPG lite mechanics. That would be a game to see!

FreedomOfSpeech said:
I spent more than 13 hours on it of course.

But hey, the new Tomb Raiders are pretty good games if you ask me.
Click to expand...

Me too! I played on hard and took close to 30 or so if I recall the in-game counter. I

Just replayed this recently on the XSX.The locked 60fps it gives you is transformative. The opening level in Mexico, and Paititi, both performed poorly previously - but not a skip now.

First play through, I remember Paititi taking an age. Second play through, it’s amazing how little time you actually spend in it if you just do the main missions.

Graphics and attention to detail are stunning. The amount of modelling involved in crafting that world must have been immense.

They listened to the vocal minority and removed most of the action, and replaced it will puzzles. And here we are with the lowest selling game out of the 3 reboots.
I'm actually trying to play through the game again right now, but boy i'm struggling with it.
Love the first 2 games, but this sucks pretty hard for what i want. It does look amazing on PC though.

I finished recently Rise of the Tomb Raider and I'm slowly crawling through Shadow in my spare time between other things.

I have to say that in spite of the disparity they received in terms of critical reception I couldn't help but notice that I had way, WAY more fun with the Crystal Dynamics titles than playing an overhyped piece of nothing like Horizon Zero Dawn.
I don't even give a shit about the crowd of fanboy who will rush to tell me why I'm wrong, I'm just stating a factual observation: I was swapping between these titles at the same time and I know which one entertained me the most.

ROTTR was so bad I didn't want to beleive it . SOTTR is a great Tomb Raider, the best of the last 3 games imo and I'm glad it finally shows in the Steam review
Edit: and of course, nothing can beat TRA
Last edited: Feb 18, 2021

Stuart360 said:
They listened to the vocal minority and removed most of the action, and replaced it will puzzles. And here we are with the lowest selling game out of the 3 reboots.
Click to expand...

What's left of the action here is so bad having less of it actually makes the game better imo.
I think the game nails a lot of the exploration but suffers from piss poor plot and sub-mediocre combat.

I actually just started Tomb Raider (2013) myself. The camera sway took a little bit to get used to but I'm liking it overall. In some ways, it feels like a very lite version of Last of Us and of course Uncharted. There are some things I like about it better than Uncharted though. The story though is pretty awful and makes me want to skip it but at least Laura is pretty likable. Still, the action is too over the top and I hate supernatural elements in games that don't need it. Still, it's fun and I'm definitely going to check out Rise and Shadow since I'm enjoying the first.
T

I’m a pretty big fan of these new Tomb Raider games. Love all 3 of them and can’t wait to see if they give us more.

i just recently started to play these games and they are bad the acting is bad, and not very fun to play. These games are not contenders to uncharted games at all. I can not connect with the story and characters pretty forgettable games. I hate the crafting.
Last edited: Feb 18, 2021

I replayed the whole trilogy awhile back.

Shadow had it’s moment, at it’s best it’s at the top of the trilogy. But the bad stuff overshadows it for me. I would give it 7/10

Rise is the best of the three for me, lots of tombs, great open world maps, feels like Metroid with the gear progression puzzles. The DLC is awesome too. Liked it back on launch, even more so now at 60fps. 9/10

TR2013 gets lots of love on the net but I think it’s overhyped, super linear, tries to be Uncharted but fails, barely any tombs at all. I would still rate it 8/10 on a sunny day because the action is good.

I need to try this eventually.

Really enjoyed the first one but I was rather lukewarm on the second one. The setting, story and pacing just weren't as good IMO.

One of my favorite series of all time because of the OG on PS1. As for the reboot I loved the first one and then they got worse again for me.

Nothing will beat the original TRs blend of instant action, puzzle solving, and locations.

SOTR was rather bland for me but worth a playthrough.
Last edited: Feb 18, 2021

Super interested in seeing where the next game goes , thought all the games in the trilogy were pretty good to be fair. Shadow had some really cool set pieces
You must log in or register to reply here.

DaGwaphics replied
Oct 25, 2021
Anyone else playing TOMB RAIDER for the first time?