I've been putting my Switch online membership to use and been going through some NES/SNES games I haven't played in years or in some cases, haven't played at all. It's pretty hit or miss with the games that aren't published by Nintendo or well known classics, but I've found a few decent games that I hadn't checked out before that I ended up enjoying quite a bit. A few days back I decided to give Vice Project Doom a shot and I have to say, I am very impressed with this game and think it's an underrated NES gem.

What really captivated my interest in V: PD was how inventive the gameplay is within the first few stages. It starts off in a driving/shmup sequence that makes you think you're playing something like SpyHunter. I personally love shmup games so I was on board with this and thought I'd be in for 8-9 levels of this, which was fine. 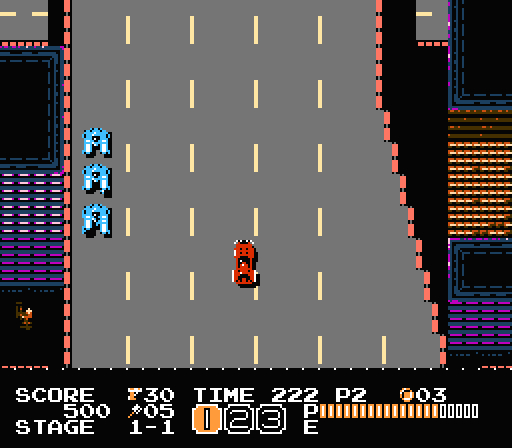 But after you beat the level, the gameplay pivots to a side scrolling action platformer, kind of like Ninja Gaiden. You have three weapons, a sword, a gun that shoots about half screen and a bomb that you toss full screen but has an arc to it. You have to switch between the weapons for different situations and boss fights which keeps the combat from getting stale. 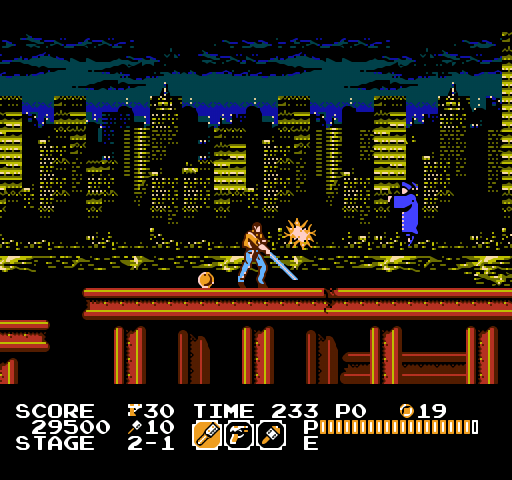 After the second or third level, the game gives you a side scroll shooting segment, like a lot of the old light gun arcade games. Technical limitations aside, I enjoyed playing games like this (Mechanized Attack comes to mind) on the NES so when they threw this into the gameplay, I was pleasantly surprised. I can't find any pictures of these segments, but they were fun to play. I should mention the driving/shooting parts only happen twice in the game, so it never overstays it's welcome and the majority of the gameplay is side scrolling action. Difficulty wise, I didn't find the game to be that hard. I cheat now with save states by saving the start of the level so I don't have to go back to the beginning and start over, but I was able to clear most of the levels without dying. Most deaths will be due to getting hit by something while you are jumping then falling to your death rather than losing all your health in combat. The boss fights were pretty easy once you figured out each attack pattern and what weapon you should be using against them. For the most part I used either the sword or the bomb for the boss fights, but you still had to experiment a bit to see which weapon was best suited for each fight.

I should mention as a non-graphics guy I think the game looks pretty damn good for a NES title. You can see it in the above picture with a nice looking skyline and the light reflections in the water. There's a train level with dark clouds rolling by in the background with periodic flashes of lightning that really stood out for how great it looked. The game also features mini cutscenes between levels to flesh out the game's story. To be clear, the story is pretty dumb, but it was still cool to see this level of storytelling in a NES game. The soundtrack was decent too, nothing really stood out to me musically but it fit the game well.

All in all I highly recommend this game if you haven't played it and I can see myself going back to play it again at some point. Don't let the generic name or the fact it was released on the NES online service fool you, this is a high quality title that I think you'll enjoy if you like to play retro titles.
Last edited: Apr 3, 2021

This was one of my favorite NES games growing up. It's shame it didn't get a digital release until now.
You must log in or register to reply here.

manfestival replied
May 9, 2022
Where do you rank Elden Ring's difficulty compared to other Souls games?
Poll 2 3

Arachnid replied
May 13, 2022
Why so little hype about Bloodstained ritual of the moon?
2