Introduction:
Back in the late 90's, Doom clones were almost a genre of themselves. Countless shooters with similar looking visuals and themes were released, one more forgotten than the other.

Even in China, Doom's influence was not far away. Developer Engine Technology LTD released Mars: The Ultimate Fighter in 1997. It later would power two more games - 3D Hero from 1997 and Tao from 1998. All games focused on sci-fi or Chinese epic sagas, told with stolen sound effects from Quake and a huge difficulty spike.

The 90s were the peak of 3D-shooters. Hits like "Doom" or "Duke Nukem 3D" dominated the genre and the PC market. Many Companies wanted a piece of the cake and started publishing their own titles. In 1997, a software company named"Engine Technology CO. LTD" based in Taiwan/China, developed their 3D-shooter named "終極戰士 / The Ultimate Fighter" also known as "MARS or MARS 3D".

This one was programmed in their own engine which was developed using reverse engineering the known top titles at the time. Program code had to be cloaked and even textures were taken from other games and simply modified at most. The game didn't see commercial success in it's home country (some rumors say it was never officially sold) and never found a way to the western world.

In 2013, a Chinese user called "Newclicker" uploaded an ISO of the original CD-ROM and another user, "Player Lin", uploaded a bad English transcript in textform on YouTube.

2018, some retro fans sacrificed their time to translate the whole game into English, so that it was possible to play a full English copy under MS-DOS.
Click to expand...

Developer Jim Valavanis has been working on a Windows port of the game, utilizing the DelphiDoom source base. Called Mars3D/GLMars3D, it features both a software and a OpenGL accelerated version of the game.

Features:
Engine:
The game uses the Doom format for maps, sprites, textures and flats inside a file container named MARS.MAD, which is very similar to WAD. Sounds, music and palettes are located outside the container. In fact the original DOS executable can load WAD files as well as MAD files. The most line and sector specials are the same as Doom. There are a few additions to the engine, compared to Doom:
Screenshot: 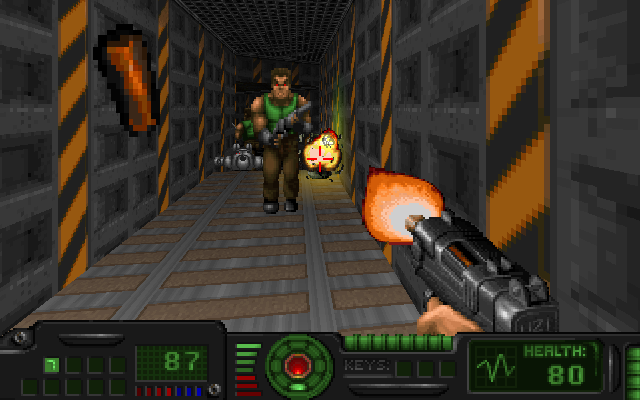 That intro is long, also are they saying "kiss me ass" when they get shot lol
You must log in or register to reply here.