Nights into Dreams on a UK show:

It's finally here: the epic four-hour Pandamonium documentary on Sega Saturn's magnificent arcade hit Virtua Cop. This film weaves together multiple story threads, including a history of the Sega Graphics Library that enabled easier programming on Saturn, an extensive breakdown of the arcade and home versions of Virtua Cop, anecdotal stories and insights from the Sega programming team responsible for putting it all together, and newly translated interviews from television, newspapers and the pages of Sega Saturn Magazine JP.

This is easily Pandamonium's masterpiece so far, even surpassing his previous two-hour episode on NBA Jam TE. I honestly don't know how much longer he can sustain this ever-increasing workload. His short videos have now evolved into full-length features, and it's only a matter of time before he either completely burns out on his dream of reviewing every US Saturn title, or he moves on to proper documentary filmmaking and winning Oscars. I'm not kidding about that--I would seriously find a way to have a theatrical screening of VC in New York and/or Los Angeles, just to qualify for next year's Academy Awards nominations.

That's how good this is, and it's a testament to a growing and evolving talent. Watch this young man. He is going places.
M

I hope he at least lasts long enough to get to the Saturn's other heavy hitterrs - VF2, Zwei, Nights. 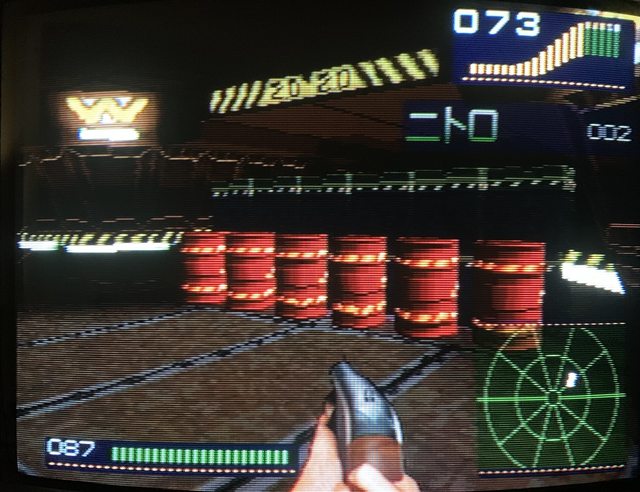 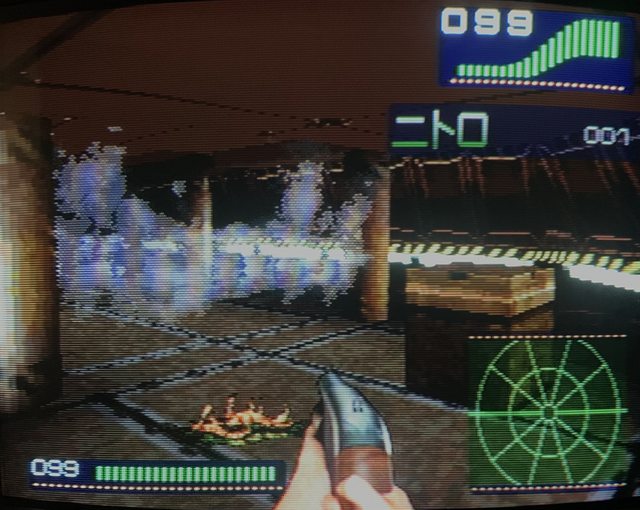 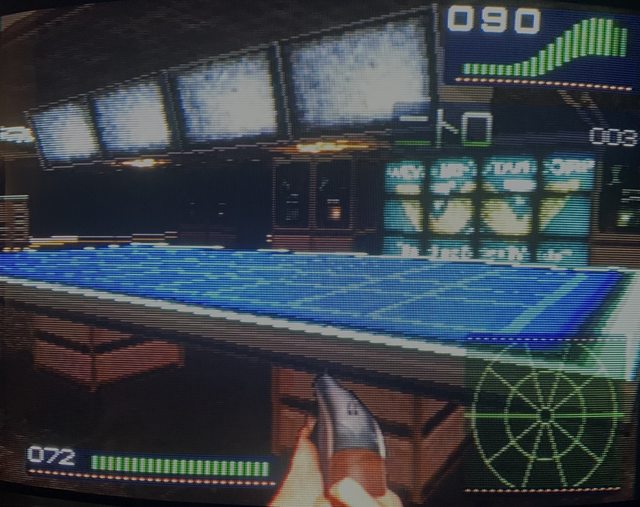 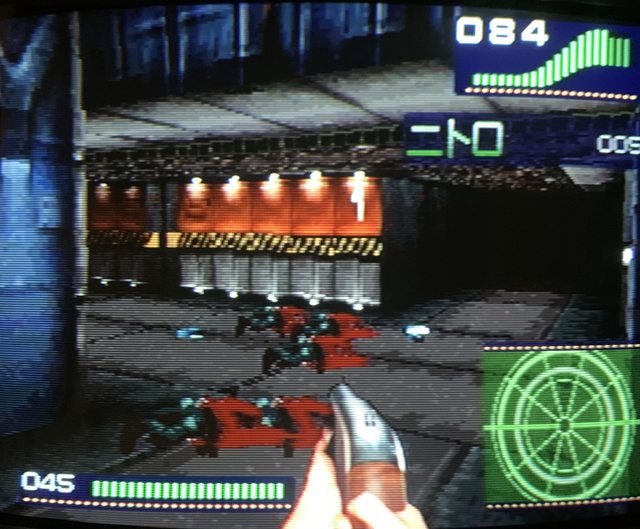 I finally bought a copy of the Japanese edition of Alien Trilogy, and I'm really enjoying it. It's very hard for any first-person shooter to thrive on a console that's home to the mighty Lobotomy Trilogy, but this one does manage to hold its own. I've only played through the first four stages but I'm quite interested in seeing what lies ahead.

This really does feel like a modified Doom, one with slower pacing, more simplified stage designs and some night mood lighting. There are no jumps and you can only raise or lower your viewing angle slightly (using an awkward two-button combo), and so your movements feel strictly two-dimensional. That's very interesting as the stage designs involve many stairways that go up or down, but there are no pathways that overlap one another. It's all very 2D in its approach. On one hand, this makes the game feel a step backwards from Doom and its descendants, but on the other hand, it does add to the sense of tension and suspense.

The action is fairly brisk and your controls are responsive enough, although movements and turning is a touch slow. Again, it adds to the atmosphere, much in the sense that the tank controls heighten the tension in Resident Evil. Those little face huggers love to scramble along the floors and pop out at you when you least expect it, while the walking Xenomorphs tend to lumber at you slowly and serve as bullet sponges. You will later encounter human soldiers who open fire on you, and the plot expands to include the usual conspiracies and corporate villainy.

Each stage features a number of mission objectives, but these all involve the same things: shoot everything that moves, grab all the items you can find, shoot all the red barrels to make the nice fiery explosions, unlock all the doors at the proper computer terminals. There are no shortage of targets and the action never lags, although the stage layouts are a bit too maze-like and tend to be slightly confusing, resulting in a lot of circular wandering around in search of that last room that unlocks the exit.

I think Alien Trilogy looks very good on Saturn. I haven't played the Sony Playstation version, but watching videos on Youtube suggests the two look nearly identical, with the usual caveats (smoother transparency effects on PSX, more stable/less wobbly polys on Saturn). The color design is quite excellent, and if this game does not employ realtime lighting effects, then it is doing a magnificent job in faking it. Notice how the bright lights darken the surrounding areas slightly, just as if you were slightly blinded in the dimly-lit hallways. It works very well because it's very subtle and natural, not at all the over-the-top garish that was all too common to this era. Really, software developers went crazy with the lighting effects during Generation Five, and it's something that has aged terribly. But that's my own opinion.

The gossip behind this game is that Probe only used one of Saturn's CPUs, but I find that very hard to believe. Its summer 1996 release date was long after the release of the Sega Graphics Library, which easily enabled developers access to both SH-2 processors, and this game's performance is essentially equal to its PSX cousin. Compare this to earlier 1995 games like Ghen War (which used only one SH-2) and see the difference for yourself.

I think Probe did a very solid job with Alien Trilogy on Saturn. If we were to make comparisons to the almighty Lobotomy, I would say that Powerslave is much faster, more nimble on its feet, features fully 3D stage designs, support for the 3D analog controller (sorely missing here) and includes all those amazing lighting effects. It's just on another plane, and don't get me started on Duke Nukem 3D and Quake, which just look spectacular on Sega's console. But that's no knock on this game. It's very good for what it is, and doesn't really try to be anything more than a good Doom-style shooter.

Nice game but it just annoys me that it looks like you're aiming at a downward angle the whole time. Perhaps they did thise due to the face huggers, I dunno, but it just feels off constantly to me. Maybe it's just the weapon sprites or a combination of that and the actual FPV.
M


There's no question that when it comes to soccer, Sega's Worldwide Soccer series holds the crown. WWS 97 was a sensational discovery when it was new, and time has taken away none of its charms. WWS 98 made only a few changes to the formula, keeping the solid gameplay intact. And World Cup 98 appeared as a final swan song to the beloved franchise at the close of the Saturn era. The only real debate among Segaphiles is which installment in the series they prefer. You can't go wrong with any of 'em.

The next question for soccer fans: is there anyone else who can dethrone Worldwide Soccer on the system? FIFA 98 comes close, thanks to the brilliant player animations, endless gameplay options (including an excellent indoor soccer mode) and nearly every team on the planet. But the frame rate is lousy and there's that half-second lag when pressing buttons (FIFA 95 on Genesis was the same way). Konami's Honoo no Striker has solid visuals and presentation, but the player animations are a tad slow and sliding tackles are useless. World League Soccer 98 has the wonderful visual design and wealth of gameplay options, but its frame rate also chugs at times and the computer teams are just brutally hard. Go Go Goal looks absolutely spectacular with its polygon players and 60fps speed (it may be Saturn's ultimate show-off videogame), but it's a simple arcade affair and the computer is even more vicious than in WLS 98.

The third party soccer titles are all solid, but let's be honest, none of them can seriously challenge Sega on Saturn. I'm very curious to hear what everybody else thinks. Is there a beloved favorite soccer game for this platform? Any underdogs that we should know about?
Click to expand...

Worldwide Soccer has the best presentation but it can be janky at times. The Konami game plays great. Where is Olympic Soccer on the list?

I missed the Sega Saturn Grandia translation is now considered final. And the Drift King '97 translation too (fixing the last large issue of the ever present logo hiding the FMV subtitles).

This patch will translate the Sega Saturn version of Grandia to English. At this point everything should be in English. This patch REQUIRES version 1.95 or higher of the SegaSaturnPatcher.
segaxtreme.net

Drift King 97 Localization by Thomas "Malenko" Carnill A hobby localization effort to bring Genki's first true 3D Shutokou racing game to the English speaking community. I am a big fan of the Tokyo Xtreme Racer series and spent a lot of time...
segaxtreme.net
I also missed that Retro-Bit's Saturn-but-with-dual-analog controllers are still going to be a thing, though the design has changed a ton. I'm still pissed at them

Pat and I got a chance to sit down with the dudes (Ron, Rich & Andy) from Retro-Bit this past weekend at Portland’s Retro Gaming Expo, and we were able to get our hands on their latest (yet to …

www.segasaturnshiro.com
Last edited: Oct 26, 2022
You must log in or register to reply here.

Are Sega ashamed of their Saturn legacy?
Opinion Community 2 3 4