On this day in 2065 years ago, one of history's most iconic and important leaders was assassinated.

Gaius Julius Caesar (hard C, by the way) was born in 100 BCE to the prominent Julii family. After the death of his father, he was forced to go into hiding after his uncle lost a war against Cornellius Sulla. Eventually, he was pardoned and allowed to pursue a celebrated military career that saw the rapid expansion of Roman borders

Wanting to be safely away from Sulla, he served far from the capitol in the Roman province of Asia (part of modern-day Turkey). After Sulla's death, he decided to return to Rome, but was kidnapped by pirates along the way. After his ransom was paid (he convinced the pirates he was worth more than they were asking), he promptly had the pirates captured and crucified.

He Rome, he was elected as a military tribune, then later as a quaestor (a treasury auditor). In 63 BC, he ran for the office of pontifex maximus, head of the state religion, in a bitter election full of accusations of bribery. In 62 BC, he was appointed to govern Hispaniia Ulterior in the western part of the Iberian peninsula (Modern day Spain, roughly aligning with Andalusia). He was widely regarded by his men in Hispania, and was able to pay of debts he had accrued by defeating two local tribes during his time there.

In 59 BC, Julius Caesar became consul, the highest elected position in the republic. The election was fuelled by corruption by all involved parties. Caesar cunningly made an alliance with Marcus Crassus (whom he had been indebted) and Pompey (one of the most important men in Rome). This became known as the First Triumvirate. The three worked together to grand land reform. After his consulship expired, he turned his attention towards Gaul. Rome feared invasion by European tribes, and so Caesar embarked on a campaign that would end in the utter destruction of the Gallic tribes, and with Caesar immensely rich and popular. Meanwhile, his alliance with Pompey and Crassus was deteriorating. Crassus had died and Pompey had married the daughter of one of Caesar's rivals.

Vercingetorix, the last king of the Gauls, surrenders to Caesar.

Caesar's successes in Gaul had caused Pompey and the senate to distrust Caesar. He was now fabulously rich and his men were more loyal to him then they were to Rome. Pompey demanded that Caesar return to Rome, but Caesar refused, believing he would be persecuted. Pompey responded by declaring that Caesar was guilty of treason and must be arrested. Caesar then marched across the river Rubicon to confront Pompey and the Senate. Instead, Pompey and his supporters fled south. This plunged Rome into a brutal civil war, which ended in Pompey fleeing to Egypt where he was murdered by assassins under the orders of Cleopatra. Caesar was not pleased with the death of his old colleague. He is said to have wept when presented with Pompey's head and ordered the execution of assassins. Nonetheless, he proceeded to assist Cleopatra in the Egyptian civil war, which saw her instated as the leader of Egypt.

At the end of the civil, Caesar was now unrivaled. Upon his return to Rome, he was showered with honors for his victories in Gaul and in the Roman civil war (though this was in poor taste because Pompey and his supporters still enjoyed some degree of popularity). As dictator, Caesar helped implement the Julian calendar, which laid the groundwork for our modern calendar we use today. he also began rebuilding Carthage, Rome's ancient rival. Various other reforms occurred as well during his brief time.

ON MARCH 15TH, 44 BCE Caesar's remarkable life was put to an end. The Roman Senate had decided that Caesar had grown too bold. There were three straws that were said to break the camel's back.

1- The Senate had voted to bestow more honors upon Caesar for his triumphs. Upon presenting Caesar with these honors, he failed to rise in honor. Instead, he remained seated and joked that the senate needed to cut back on honoring him. This slight strongly offended the Senate, who interpreted this act as Caesar saying he didn't need the Senate anymore.

2 - In January 44 BCE, a crown was placed on the head of a statue of Caesar in the Roman Forum. After the incident, people began to greet Caesar as rex ("king"). Caesar responded by saying "I am not Rex, but Caesar." Two Tribunes had seen this happened and were not amused. They ordered the people that had created Caesar as king arrested. Caesar then viewed this action as building tension against him. He had the tribunes stripped of their power and removed from the Senate. This turned public opinion against him since the public viewed the tribunes as their representatives.

3 - During a festival in Mark Antony placed a crown on Caesar's head, which shocked those in attendance. Julius Caesar removed the crown and said "Jupiter alone is the Roman King.", then sacrificed the crown. Still, rumors began to spread that Caesar had staged the stunt to gauge public opinion of him declaring himself monarch.

Senate began to conspire against Caesar. The date of March 15 was selected due to being a deadline for settling debts. The night before, Mark Antony heard rumors of the plot. He attempted to head off Caesar as he made his way to the Senate, but he was delayed by Gaius Trebonius, a former legate under Caesar's command in the Gallic Wars. Meanwhile, Caesar entered the Senate and was presented with a petition to consider. A crowded of senators then surrounded him pretending to advocate the petition. The senators then sprung their trap. They pulled down Caesar's toga, which prompted Caesar to say "Why, this is violence!". The senators proceeded to stab at Caesar. He tried to get away but was unsuccessful. In the end, he was stabbed 23 times. Only one of the wounds was fatal though. One that pierced his heart. 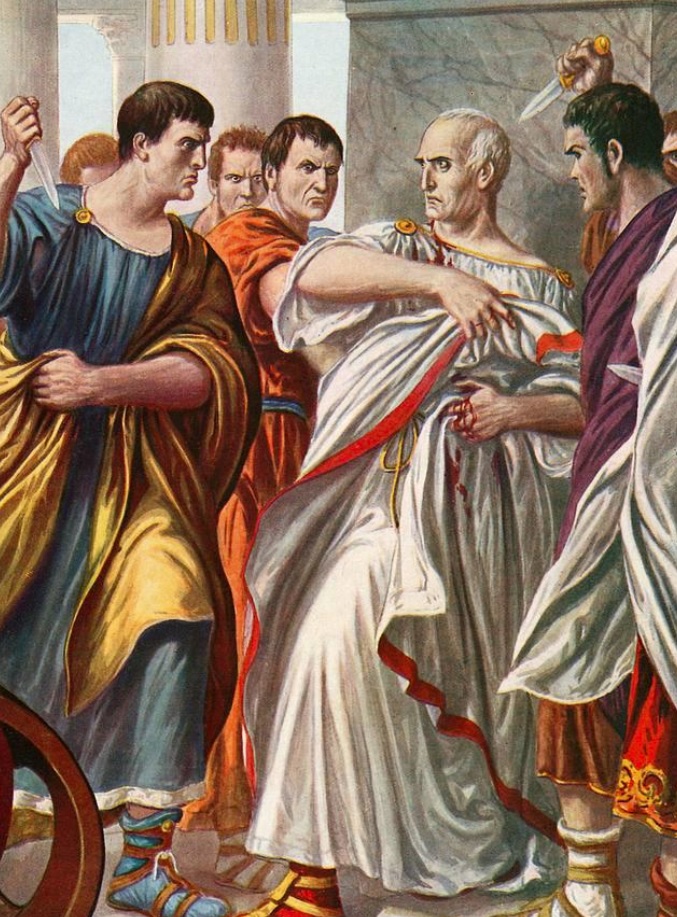 There are disputes over what his last words were. Famed historian Plutarch said that he simply put his toga over his head when he saw his friend Decimus Brutus amongst his murders. William Shakespeare famously wrote "Et Tu, Brute" to end his play Julius Caesar.

After the murder, Brutus and his co-conspirators took to the streets and declared, "People of Rome, we are Free once more".

In the aftermath, Mark Antony tried to hold things together by offering no punishment to the Senators that had participated in the murder, as long as they ensure Caesar's appointments would hold. Meanwhile, Julius Caesar's adopted son heard word of his father's death and returned to Roman with an army determined to get revenge on his father's murderers. The ensuing civil war saw the end of the Roman Republic, and the beginning of the Roman Empire, with Octavius as the first Emperor.

Then they celebrated by pouring him over a salad

I always wondered how much of the story of Caesar was fiction, influenced by Shakespeare and the many passing downs of it.

Pagusas said:
I always wondered how much of the story of Caesar was fiction, influenced by Shakespeare and the many passing downs of it.
Click to expand...

I think in pop culture a lot of our image of him is shaped by Shakespeare. But Roman records are pretty well preserved. You can read books written by Caesar himself, though of course those autobiographies are super biased.

Seriously, might as well have called him a decepticon!

B is for Brutus.
N

I made a mistake. It should be Marcus Brutus not Decimus Brutus
Last edited: Mar 16, 2021

One of the greatest men in history. Unfortunately his popularity threatened the status quo. 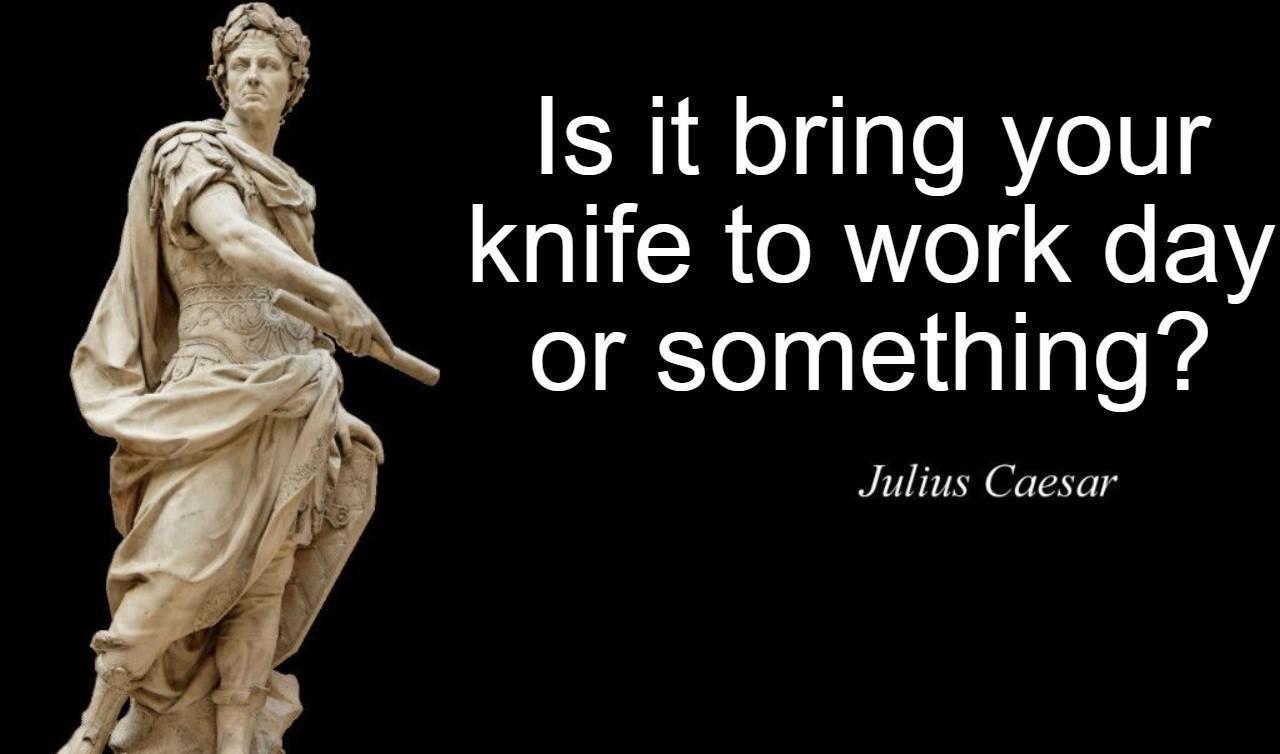 Great write-up, OP. Fun fact: the word for "king" in a lot of languages come from the pronunciation of Caesar's name. German "kaiser" and Russian "czar" for example.

Your account of Caesar's history seems incomplete. No mention of Asterix and Obelix?

when julius held the office of pontifex maximus there was an 'incident' involving one of the claudian family that some historians consider one of the most 'important instances of transvestism' in history. long story short: an important claudian dressed up as a lady and went to an all female religious ritual being held by julius' wife. he was caught by a maid/attendant, jailed then sentenced. during his trial, julius was called as a witness and took a powder ('i know nothing!'), freeing the claudian and earning him massive points with the populari branch of roman blue bloods. he knew how to pick his battles, and was smart enough not to pick one with what was perhaps the most powerful family in Rome.

Just seemed like a selfish man who accomplished a lot of his selfish goals.

NecrosaroIII said:
I think in pop culture a lot of our image of him is shaped by Shakespeare. But Roman records are pretty well preserved. You can read books written by Caesar himself, though of course those autobiographies are super biased.
Click to expand...

I was just thinking the other day, it's incredible to think I can pick up and read a book written by Caesar himself. Translated, obviously, so it's not like I'm reading the exact words he wrote, although I supposed I could if I really wanted to put the work in. But it's always cool when you get that sense of having a direct connection with history. That Caesar wasn't just some abstract concept. He was a real person like me and you and in some sense he was writing that book for us.

In popular culture only his murder and Cleopatra association are widely known, but he was hella politician and military commander.

Is this the same guy from that show? Rome I think? That show was alright.

He was great in shadow of rome for ps2.

The real point of Shakespear's play was Act III. The fact that the conspirators act led to the Empire (what they didnt' want), is the moral of the story.

In a democracy, use democratic means.

yes, his orders, and when julius found out he just about went mad. pompey married his daughter, after all, and though they lived through much political conflict in their lives, they also had many shared personal tragedies that bonded them as family. extraordinary people who, like all of us, had the same mortal burdens to contend with. oh, and julius had such an incredible mind that he was often seen writing multiple letters and reading multiple books simultaneously when travelling (people remarked on this, and not always in a positive way). his brain just moved much faster than everyone around him.

1. How ironic that the death of Ceasar gave rise to Augustus and the Roman Empire.
2. Cleopatra was of Ptolemaic dynasty which started with a general of Alexander the Great, one of his Diadochi. Each of his generals laid foundation to dynasties that lasted for many years.

Werewolf Jones said:
B is for Brutus.
Click to expand...