Peacemaker |OT| Give Peace a Chance

PEACEMAKER explores the continuing story of the character that John Cena reprises in the aftermath of executive producer James Gunn’s 2021 film The Suicide Squad – a compellingly vainglorious man who believes in peace at any cost, no matter how many people he has to kill to get it!

Gunn wrote all eight episodes of PEACEMAKER and directed five, including the first. Gunn, Peter Safran and Matt Miller serve as executive producers on the series, with Cena as co-executive producer. Based on characters from DC, PEACEMAKER is produced by Gunn’s Troll Court Entertainment and The Safran Company in association with Warner Bros. Television.
Click to expand...

Yes, this is set AFTER The Suicide Squad so you should watch that first (it's also on HBO Max).

Watched the first episode yesterday and it was very funny. Can't remember when was the last time I laughed so much at a show. Gonna watch the second one tonight.

Thanks for reminding me about this.

The main criticism I've seen online is that Peacemaker almost seems like a different character from the movie.
S

Watched all 3 eps, yeah its good. can't wait for more.

This show is better then it has any right to be. I was expecting doom patrol and got adult guardians of the galaxy.

I haven't laughed this much at a show since probably Veep. It just keeps coming. I can't wait for more episodes.

As far as I am concerned, Vigilante is a multiverse version of Dead Pool.

Oh I gotta get on this immediately. One of the first cassettes I ever bought with my pocket money was;


Hope they don't miss their chance with using that.

It's set after? How did he make it?

They just glance over it. He just survived. Maybe there will be some better reason offered down the road, but it really doesn't matter - the show is goofy as hell and the only thing it takes halfway seriously is (minor spoilers)

The end credit scene of The Suicide Squad directly leads to this show happening.

TDiddyLive said:
The end credit scene of The Suicide Squad directly leads to this show happening.
Click to expand...

I didn't even know it had an end credit scene. Will need to check it out now.
Y

BadBurger said:
They just glance over it. He just survived. Maybe there will be some better reason offered down the road,
Click to expand...

The end credits sequence of The Suicide Squad shows him being revived by the side team and being offered another chance.

YCoCg said:
The end credits sequence of The Suicide Squad shows him being revived by the side team and being offered another chance.
Click to expand...

I just watched it, it still doesn't really offer any reason why he survived. In the show the doctor just says (sic)

You got shot and had a building fall on you. Surprised all we had to do was reset your clavicle

James Gunn mentioned either in some interview or on Twitter he'd never bring a character back from the dead but he had too good of an idea for a show, something along those lines. It would be a very Gunn move to just basically say "yea he survived, don't worry about it, on with the show".
Last edited: Jan 16, 2022

this is pretty much the same kind of tone as the boys but more competently made.

the boys has a better premise but is not well executed so it's a bit of a contrived mess.

I couldn't really get into it. Seemed like an odd choice to just have 90% shots of backgrounds with no characters and the occasional person talking to themselves

I love how Gunn chose an absurdist band who makes faux 80's hair band songs for his theme. If you listen to the lyrics they're just singing nonsense because it kind of sounds like an 80's song


Everything about this show is awesome and funny
Last edited: Jan 16, 2022

The Louis CK bit in episode 2 is great.

Yoboman said:
I couldn't really get into it. Seemed like an odd choice to just have 90% shots of backgrounds with no characters and the occasional person talking to themselves
Click to expand...

I know, right? Really fucking weird. Not sure what the ’joke’ is meant to be, of just filming nothing. Gunn really seems to have gone off the rails with this one.

This week: Matter Eater Lad consuming an entire Wendy's restaurant because they forgot his fries

I thought I had things figured out, but after that final scene I'm not so sure any longer

It was cool to see Vigilante in action. Dude may be a total dork but he has skills.

This week: Matter Eater Lad consuming an entire Wendy's restaurant because they forgot his fries

I thought I had things figured out, but after that final scene I'm not so sure any longer
Click to expand...

That's great, but Aquaman fucking fish at an aquarium is probably going to the best opening of any DC show ever.

Was also surprised bout this show, I actually like it.

definitely hitting its stride, vigilante is such a good character

And Kal-El uber-liebes the old scheisse

After this latest episode I have no idea what Waller is doing here.

Trying to get all parties to wipe each other out? But if that was the case wouldn't there have been much less convoluted ways of going about it?

Might check one episode, not sure because of Zhong Xina.

This really feels like the most Troma thing Gunn has done since hitting it big with Marvel.

The way they force idiot dialogues in every episode is getting tiresome. The show is pretty fun though.
N

I watched an episode expecting to hate it for some reason. This is now my second favorite show that is running at the moment. If it weren’t for the last two Bobba Fetts, it would be my favorite, Brilliant show.

Fun show. My only complaint is that there are way too many scenes where everything screeches to a halt so that characters can have "ad-lib" arguments over nothing of substance. Still up there with the animated Harley Quinn show as top-tier DC shows.

I was on the fence for an episode or two but at this point I am in, very funny show and definitely has its own sensibility compared to other comedic superhero shows
R

Stop Motion Pornography said:
Fun show. My only complaint is that there are way too many scenes where everything screeches to a halt so that characters can have "ad-lib" arguments over nothing of substance. Still up there with the animated Harley Quinn show as top-tier DC shows.
Click to expand...

Fucking love this show. James Gunn is a goddamn master at his craft.

Also, special commendations to the musical selections. That Monster song during the butterfly scene in the latest episode is badass, and the intro song has been stuck in my head for weeks

Edit: One last thing... I just wanted to make note of this actor whom I've never seen before and has stole every scene he is in. If DC actually makes a live-action "3 Joker" feature with Phoenix and Dafoe, then I want this guy to be the third Joker. 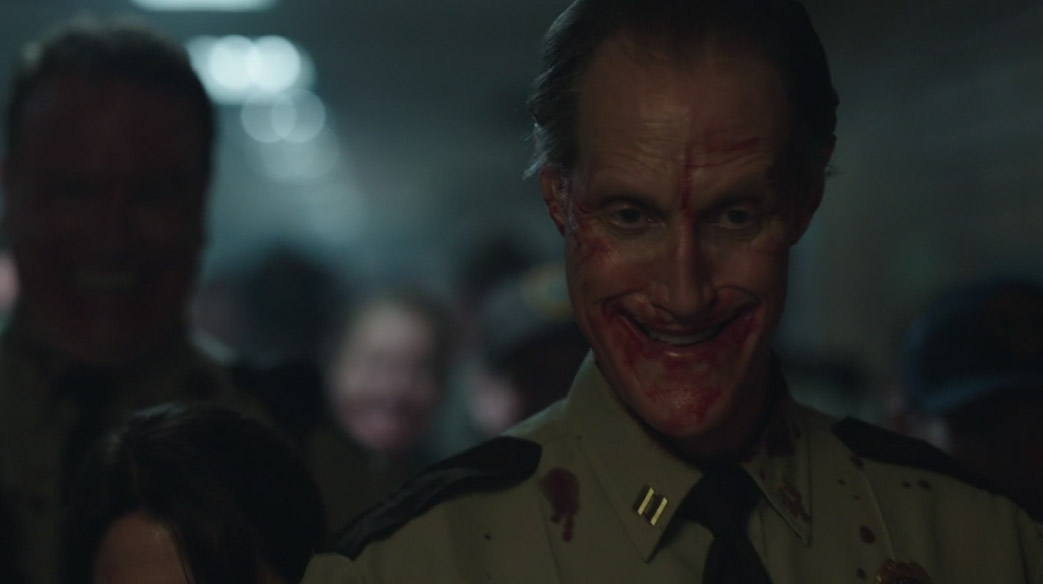 But they'd probably go with a much bigger name, obviously.
Last edited: Feb 7, 2022

Last episode was really funny. The white supremacists running around with hoods lmao.

Thought episode 7 was a bit messy, too much tonal whiplash making the dramatic scenes seem shallow and forced and the comedic stuff seem really mean spirited.


Also not really a fan of closing up the White Dragon sub-plot before the final episode; although I can sorta understand why Gunn would want to keep the John/Leota angle running til the season finale, and the ordering serves that purpose even though it really undersells any emotional payoff on Peacemaker's backstory. 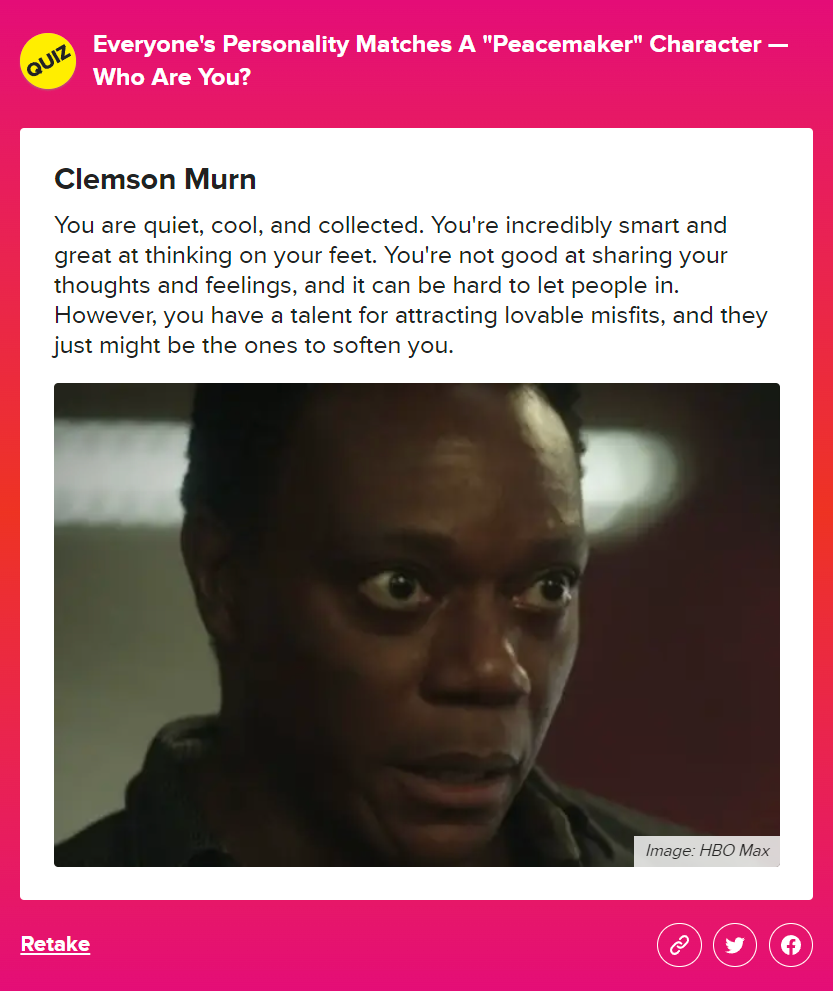 BadBurger said:
I got Murn:

Remind me never to piss you off

BadBurger said:
I got Murn:

Nice!
I got Leota, which fits pretty well I think. 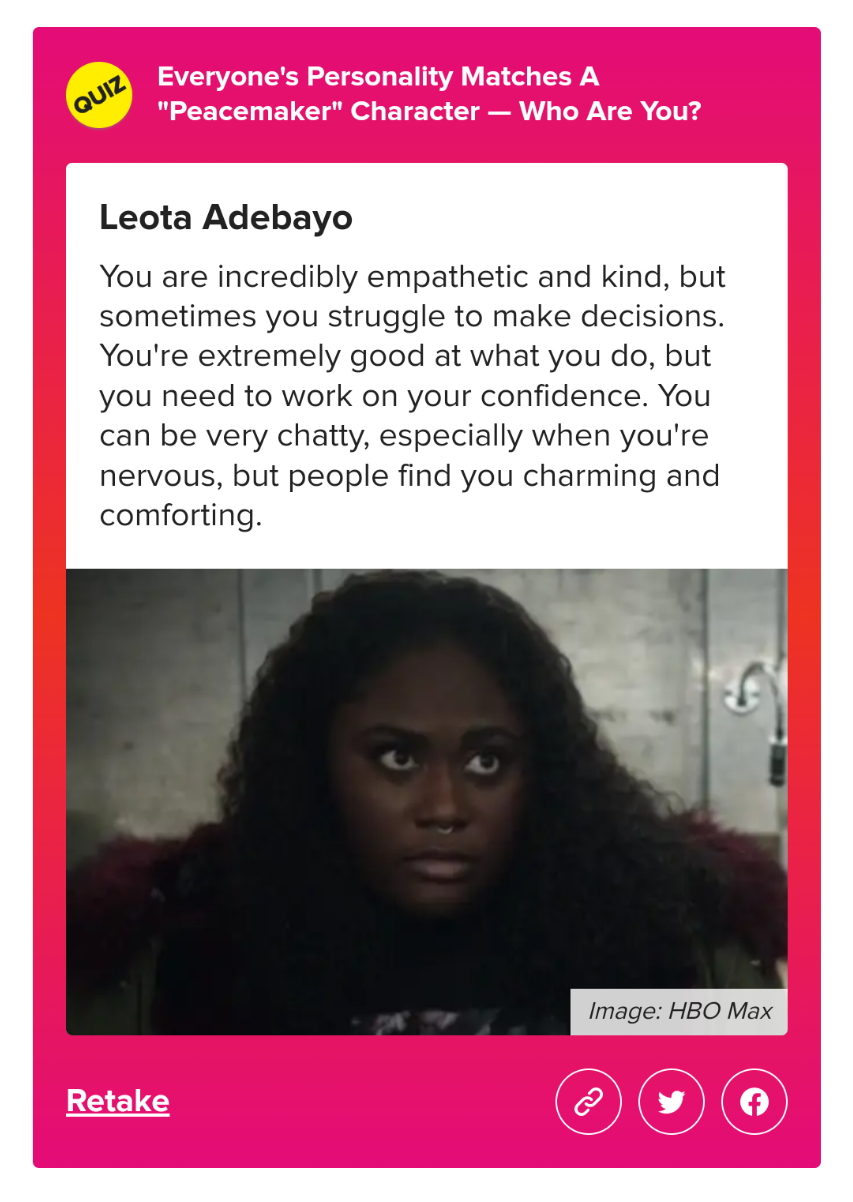 Oh damn, I honestly paused
when Eagly got punched. I love this animal. Also, any chance that the White Dragon gets possessed by a butterfly? I really want him to have more screen time - I was expecting this epic villain when he just got whacked twice by Vigilante.

Just give the DCEU to Gunn for a while.

Just give the DCEU to Gunn for a while.

Godamn that was a pleasant surprise

I haven't watched the final episode yet (not sure if it's out already), but this is easily my favorite comic book show after The Boys. Boys wins out due to a more intriguing universe, but Peacemaker is just plain entertaining week after week.

I didn't feel much of anything for The Suicide Squad. I thought it was the worst of Gunn's limited comic book movies (the best being Super), and lacked characters I cared about. But Gunn definitely knew he was on to something with the Peacemaker character, because he was the standout of the film next to King Shark, and has been even better-written/developed in the series. John Cena will owe Gunn after this, because he's going to bet a lot better roles after this than just Vin Diesel's surprise brother. I'm impressed with Cena's acting performance more than I ever was with Rock or Bautista. I don't think those two have ever been relied on to lead such dialogue-heavy storylines. The show very much hinges on Cena making a murderous thug feel likable and maybe even a little relatable. I'm not going to give him an Emmy for this, but he's definitely surprised me, in a good way.

Sign me up for Season 2 yesterday. The group's chemistry is fantastic. Vigilante might be my new favorite sociopath.

Good finale. I didn't expect those cameos in the end when they were shown in the dark.
You must log in or register to reply here.