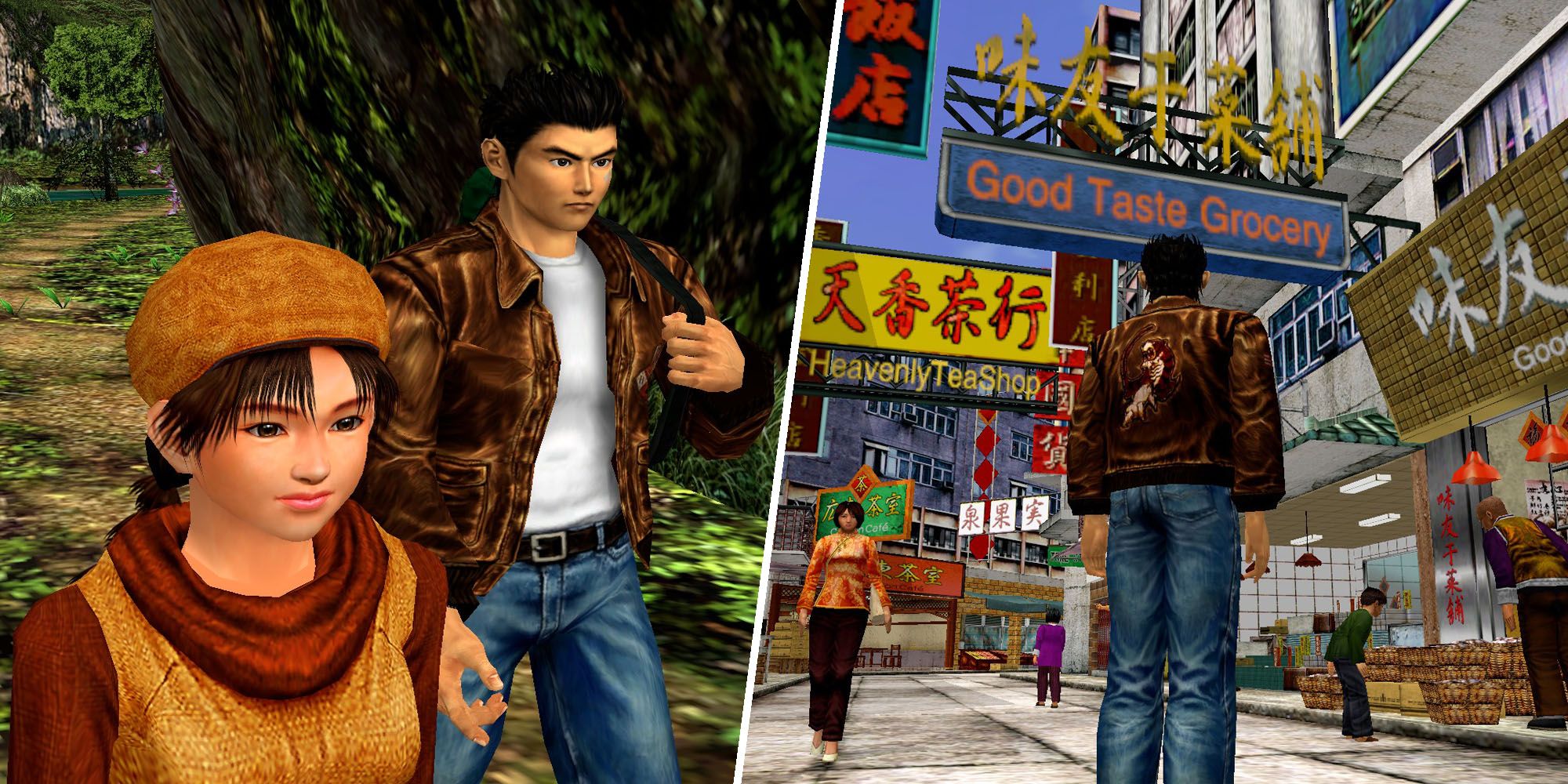 A post from 110 Industries could be teasing a potential partnership between the publisher and renowned Japanese game developer Yu Suzuki.

When Shenmue creator Yu Suzuki appeared at the beginning of 110 Industries' Tokyo Game Show presentation late last year, most people watching probably didn't bat an eyelid. For fans of the Shenmue series, however, Yu Suzuki's prominent inclusion in the 40-minute showcase video raised some interesting questions, the most common of which was "why?"

Prior to the release of the video, neither Suzuki nor his YS Net development studio had any obvious affiliation with the 110 Industries brand. With that in mind, for 110 to dedicate the first five minutes of its TGS showcase to the legendary Japanese developer seemed like something of a strange decision. Six months on, the real reason for Suzuki's inclusion may finally have been revealed.

After seeing an Instagram post promoting the publisher's upcoming third-person action game, Wanted: Dead, one hopeful Shenmue fan posted a comment suggesting that 110 team up with Suzuki to create Shenmue 4. In all likelihood, this was probably little more than wishful thinking on the fan's part, but somebody from 110 actually responded. In the reply, they asked the fan to "guess why [Suzuki] was at [their] TGS stream."

While it's perhaps unlikely that 110 would directly announce a project of this scale in such a manner, the idea of the publisher backing Shenmue 4 doesn't actually seem all that far-fetched. It could certainly explain how Suzuki came to be in the TGS showcase video, and would be very much in keeping with the company's mantra of encouraging "creativity, bold design choices and innovation," three things that, for better or worse, the Shenmue series is certainly renowned for.

After seeing an Instagram post promoting the publisher's upcoming third-person action game, Wanted: Dead, one hopeful Shenmue fan posted a comment suggesting that 110 team up with Suzuki to create Shenmue 4. In all likelihood, this was probably little more than wishful thinking on the fan's part, but somebody from 110 actually responded. In the reply, they asked the fan to "guess why [Suzuki] was at [their] TGS stream."
Click to expand...

So it's a nothing burger.

Hope so and he better fucking conclude it this time.

He should just work with whatever studio is doing the anime adaptation and complete the story that way.
I really doubt anyone will give him money for a forth game after how bad the third one did (in both sales and reviews)

Did they not learn from Shenmue 3 that this IP died along with the Dreamcast? We all thought we wanted a third part, but I can’t help but think we were all tricked by our rose-tinted glasses.

I should probably get around to playing 3 one day

Shenmue hasn't been financially successful three times now, but why not give it another go and see if the fourth time can be the charm?

I own all 3 on PS4 but haven't played them yet

I was surprised to see shenmue got an anime recently.

Sega just needs to remake 1 and 2 in the dragon engine, build some interest in the IP and make a number 3 that isn't absolutely awful.

And then we can all forget and pretend the other shenmue 3 never happened.

He had balls to not just end it with 3.

A 4th game will presumably be cheaper and faster to make now they have it built up, but that shit ain’t happening.

I remember when Shenmue came out, I rented it and literally stayed up all night playing it. I was blown away by the world and setting. I played that shit for so long, my Pops went to work and came BACK. It was like 6 a.m. I turned that shit off so quick and ran up to bed....Lol. Though, the series to me...It's dead. I just don't really care. Thought the announcement of Shenmue 3 was amazing, but when I saw gameplay and then eventually reviews, I just didn't care at all.

Hope it works out for those that want it though!
P

fans of this series will never get what they actually want. its time has past.
Last edited: Apr 8, 2022

Hope so. Need to the end.

Let it die. The last one was insulting enough.
W

I remember absolutely loving 1&2 but I couldn't get into 3 for some reason.
S

Shenmue fans and Sonic fans should be locked under the same room.

As a huge shenmue fan back in the day, shenmue 3 was abysmal. Yu doesnt have the right mindset for the series, nor the capacity. It'll be DOA. Finish the series in the anime and forget the game medium.
Last edited: Apr 8, 2022

110 Industries have been teasing Shenmue IV a lot lately

Seen a lot of discussion about this in Random Thoughts and thought it was thread worthy. 110 Industries have been doing a lot of Shenmue related teasing lately: Not only that, but they've also been liking all the hyped reactions on Twitter, and started following the Dojo account too...

I think Yu will get it right with 4.

Hope it's true. Don't care about playing it at all but I'm looking forward to Silent Rob's review

MrFancypants said:
Did they not learn from Shenmue 3 that this IP died along with the Dreamcast? We all thought we wanted a third part, but I can’t help but think we were all tricked by our rose-tinted glasses.
Click to expand...

Yes and no. I tremendously enjoyed 1 and 2 HD, not long before 3 came out. Shenmue 3 was just a piece of shit in every sense of the word.

But Shenmue 3 did something good, and that is that I don't give much fucks about Shenmue 4. So for me its fine whatever they do.

The problem is whoever does end up making part 4 has a big job on their hands to end it on a high, as I get the impression part 3 was the weakest entry compared to part 1 and 2

Shenmue 3 was the GOTY of 2019. Shenmue 4 is going to be one more Masterpiece and a day one game for me

At long last, the Shenmue title that takes us to

Roughly 50% of the way through Ryo's story arc.

The most frustrating part of Shenmue 3 wasn't all the gameplay related bullshit that they got wrong, nor was it all the fuckery outside the game with securing funding, changing plans for backers, etc.

Suzuki had been granted a golden opportunity to revive a long-dead series and give himself and his fans an ending to a story he and his peers created. Instead, he squandered it and made a game where the story is entirely inconsequential. It never moved forward, it never answered any long standing questions. You could skip the Shenmue 3 story entirely and end up in the exact same situation as we were in at the end of Shenmue 2. I've never seen a blatant disregard of the very fans that made the game possible to begin with, and I'll never trust him again in regards to the series.

MrFancypants said:
Did they not learn from Shenmue 3 that this IP died along with the Dreamcast? We all thought we wanted a third part, but I can’t help but think we were all tricked by our rose-tinted glasses.
Click to expand...

We all still want it, just more like the classic and not ShenMue 3

The 3rd game was honestly one of the worst games from last gen, i mean just really bad and dated feeling.
It did produce a couple of funny playthroughs from streamers i watch though, so there is that.

S3 was a big steaming pile of bubbling dinosaur diarrhoea....

No soul, no questions answered, crap battle system, QTEs were so fast it was just annoying, mediocre story, mediocre bad guys who were just big oafs.

Castle Siege was just awful.... These random people who Ryo has spoken with a few times are all of a sudden close friends come to help and risk there lives fighting the chi you men, Then it's just full of comedy nonsense.

Shenhuas dad basically said the same shit Zhu Yuanda did at the end of the 21 year old superior Shenmue 2.

The voice acting was beyond bad, Too much focus on mini games everywhere, oh and last but not least Ryo forgot all his training and has become a pussy who can't beat simple thugs... GTFO the fans could have made a much better story.

Insult to backers and fans.

I bet at the end of Shenmue 4 you watch the bad guy sail away for distant lands while your character swears revenge.

What the fuck is Shenmue?

Who knew a lower budget and rural Chinese villages don't make for a good Shenmue game? 3 brought into years of hype, 4 is just the cash grab.

Sounds great if it leads also to releasing 3 on other platforms. Bring it on.

Yu Suzuki was asked several questions about the Shenmue 4 rumors during an interview to promote his newly released Apple Arcade game Air Twister.

After teasing a big announcement that never actually happened, the publisher eventually stopped interacting with tweets mentioning Shenmue and began promoting its debut title Wanted: Dead, a Ninja Gaiden-inspired hack and slash game that's scheduled for release later this year. That all changed late last night, though, with a now-deleted tweet in which the publisher responded with "Eventually" after a fan asked about getting Shenmue 4. If that weren't enough, Yu Suzuki has now had his say on the long-standing rumors too.

In an interview with Game Rant, the influential Japanese developer first tried to downplay the idea of a collaboration between the two companies, dismissing the talk as little more than rumors. However, upon being asked about 110's "Eventually" tweet, which went out just a few hours before the interview began, he seemed genuinely surprised, revealing that he hadn't spoken to 110 about the tweet. When pressed further, he agreed that it wasn't normal for a publisher to make comments about games that they weren't involved with before offering a "No comment" of sorts.

To add further fuel to the fire, within just a few hours of the interview's completion, the tweet in question had been deleted, but not before a snapshot of it was taken using the Wayback Machine. 110 Industries, whose CEO is currently visiting Japan from Switzerland, has been approached for comment about the tweet, though the publisher is yet to provide a response at the time of writing.

LOL I wonder how well that ROI for Sony went for that exclusivity for Shamu 3?

I backed and separately bought Shenmue 3. I'll finish it if they announce 4.

I didn't even like 3, but I'd still be happy to see it happen. Shenmue II was one of my favorite gaming experiences ever.
K

If Sega is really making Virtua Fighter 6 then Yu can just use that engine for combat. Shenmue 4 with some real story progression and QOL features will be fine for me.

adamsapple said:
So it's a nothing burger.
Click to expand...

and still is.
You must log in or register to reply here.

Guy_who_thinks_hes_cool replied
May 19, 2022
There are currently ‘no concrete plans’ for Shenmue 4, says Yu Suzuki
2

Comandr replied
May 7, 2022
Yu Suzuki talks about changes he would like to make in Shenmue 4
News 2