“Reintroducing Puzzle Bobble, with its iconic puzzle-solving and new three-dimensional spin to today’s players, has been a labor of love for Survios,” said Survios CPO and head of studio TQ Jefferson in a press relesae. “As our first cross-reality title, Puzzle Bobble 3D: Vacation Odyssey on PlayStation 4 and PlayStation 5 will provide players around the world the option to play the way that suits them best, with or without a virtual reality headset!”

Here is an overview of the game, via Survios senior product marketing manager Amy Pantea on the PlayStation Blog:

Bursting with the same vibrant design, adorable characters, and timeless puzzle-solving gameplay as the original, Puzzle Bobble 3D: Vacation Odyssey is the next evolution of the classic Japanese action puzzle game franchise so many of us grew up playing. For the first time in Puzzle Bobble history, bubble puzzles now take three-dimensional form to create new brain-teasing challenges which will test the most die-hard veterans and newcomers to the franchise alike.

Aim, fire, and pop bubbles with your trusty cannon to match three or more bubbles of the same color, while taking on 100 3D puzzles in our Story Mode. Puzzles no longer lay on a flat plane, but take the form of three-dimensional clusters that spin and rotate with realistic physics when bubbles collide.

Players will face a variety of gameplay mechanics that will test even the most seasoned bubble-poppers. Players will need to solve and clear puzzles to earn coins to activate game-changing power-ups and maximize their popping power.

Puzzle Bobble 3D: Vacation Odyssey is designed to be an intuitive, pick-up-and-play puzzle-solving experience for players of all ages. We hope long-time fans will be excited to test their skills in this multi-dimensional take on the classic bubble-popper, while introducing new players to a timeless franchise which has kept gamers engaged in solving and mastering puzzles for more than three decades.
Click to expand... 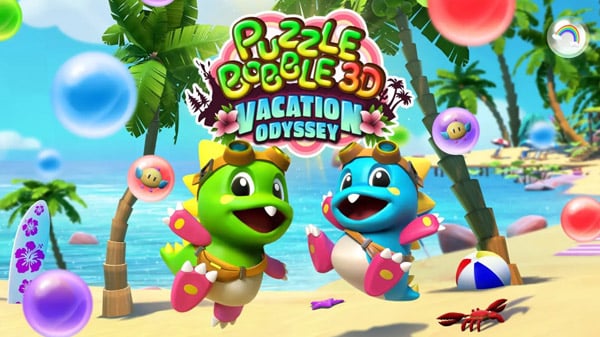 who would imagine a first person shooter of puzzle bobble

Looks cool seems like a missed opportunity for Switch though?
B

This is what those poor little dino's have succumbed to.

I'm a fan of the Puzzle Bobble games (at least 1-4, don't even know if there have been other entries since). To this day I still own 3 on the Saturn and 4 on the Dreamcast.

This is an interesting take on the formula... and I mean that in a good way.

This is already out on Oculus Quest. I've been tempted to buy it but was waiting to see if it came to Steam.

Gamexplain did a good review video on it if anyone is interested. (they liked it)

Looks interesting enough. At least it's amazeballs in 2D.

Play on 10.5.2021! Puzzle Bobble is back in an all-new, 3-dimensional world! Celebrate 35 years of bubble-popping fun in this island adventure - with 100+ new brain-teasing puzzles, online PvP mode, and full PS VR support. Experience cross-reality with this all-in-one PS4, PS5 and PSVR title.
Click to expand...

8BiTw0LF replied
Feb 7, 2022
Introducing the next generation of VR on PlayStation
2 3 4