Survey: Majority of women at Chinese universities have never masturbated and 1/3 have never ad an orgasm or don’t know what one is

Female students are less satisfied in relationships. Men are more comfortable with live-in partners. A majority of women at Chinese universities have never masturbated, and one-third have never experienced an orgasm or don’t know what one is.

These are some of the findings from a national survey on the sex lives of university students — including undergraduate, master’s, and doctoral students — released this week. Conducted by the China Family Planning Association, Tsinghua University’s Research Center for Public Health, and China Youth Network, the survey involved 54,580 students from 1,764 universities nationwide.

A majority of the students in the survey identified as heterosexual, while 4.5% and 9% said they were gay and bisexual, respectively. More than 6% said they were unsure of their sexual orientation.

More female students said they were unsatisfied in their relationships compared with their male counterparts. However, the report suggested that male students were more likely to suffer emotionally after breakups.

Some 73% of the student respondents said they would only marry “the right one,” suggesting a reluctance to wed compared with previous generations, and shedding light on the country’s declining marriage rate.

Only half of the surveyed students said they received sex education in school, and less than 15% said they felt “very satisfied” with what they were taught.

Inadequate sex education in Chinese schools has led to a limited understanding of reproduction and sexual health, often prompting parents to send children to special classes to learn about the birds and the bees. The report suggested students didn’t have a healthy understanding of sex-related issues, including contraception, sexually transmitted infections, and abortion: On these topics, students answered just four out of the nine questions correctly, on average. 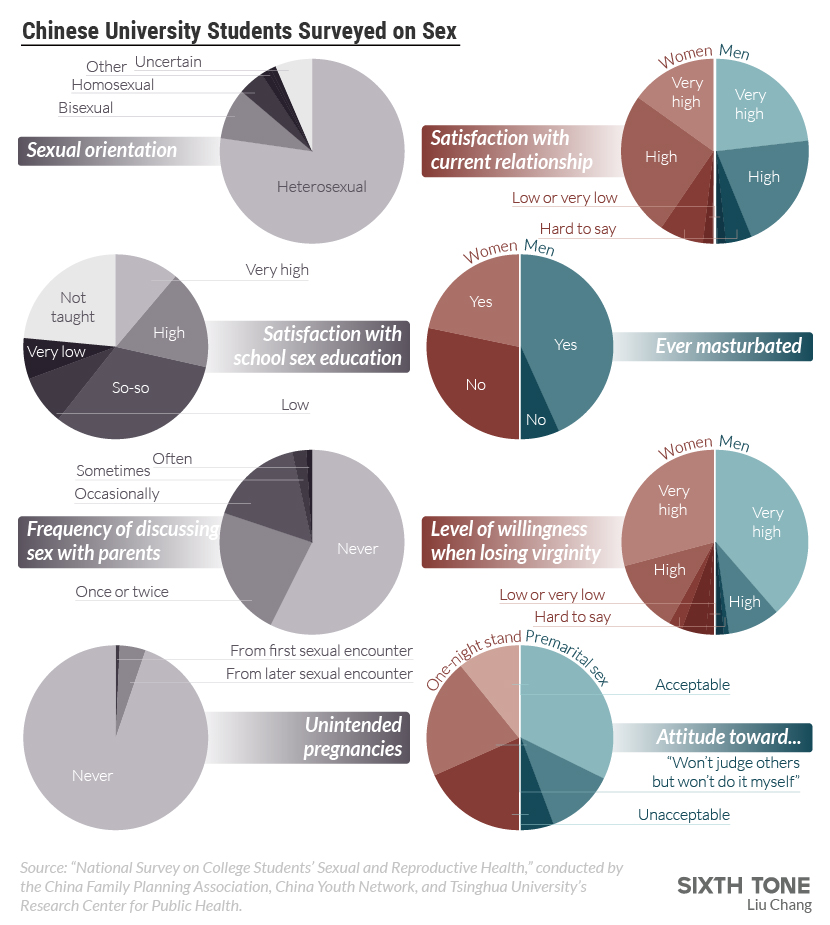 A majority of women opposed one-night stands and casual hookups.

According to the survey, 3.6% of respondents said they had had sex with a teacher.

More than half of the surveyed students said they used contraception during sex every time, while 3% never used protection.

According to the survey, 5% of university students had experienced unintended pregnancy — a decline from the 11% reported in the last survey, published in 2016. Of these people, 94% sought an abortion, 17% more than once.

A majority of those who sought abortions opted for surgical procedures, while less than 20% went with medical abortions.

The survey also highlighted the prevalence of sexual harassment at Chinese universities. Nearly 15% of women said their private parts had been touched without consent, while 2% said they had been raped.

Nearly 4% of female students said their teachers had harassed or assaulted them, the survey revealed.

“We found that a lot of young people have experienced sexual harassment and assault at different levels,” Cao Wenzhen, a research assistant at Tsinghua University’s Research Center for Public Health, told Sixth Tone. “However, many of them never told anyone (about their experience) or sought help from professional institutions. We need to provide more services for young people in terms of sexual and reproductive health, including consultantations, legal help, medical services, and online support groups.”

I would offer to lend a hand, but they need to learn how to shave that shit first

Asian ladied me love you long time so no worries ok.

I'm all for pounding out some Chinese pie. 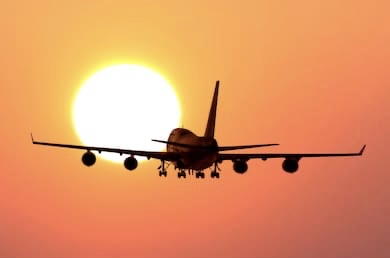 Four perm bans so far, if this was on that other site.

That data is definitely painting an unhealthy picture of the countries youth when it comes to sex and relationships.

It also once again highlights the gulf between China and the west in their cultures and approaches to pretty much everything. Both are fucking up, but in completely opposite ways to one another.

As I've said before, but we all really need to find a middle ground, because neither making primary school aged kids write gay love letters and watch trans strippers, nor a third of young girls not knowing what orgasms are, while 4% of them are getting letched on by teachers, is acceptable.

I knew a guy senior year in high school who used to openly brag he’d never masturbated or ejaculated. He was waiting for marriage.

That's about men. And "lying or health problems".
N

Gashtronomy said:
I would offer to lend a hand, but they need to learn how to shave that shit first
Click to expand...

Negative. Some hair is nice.

NecrosaroIII said:
Negative. Some hair is nice.
Click to expand...

Sounds like they need some tongue in their life

Gashtronomy said:
Not when it looks like a badger has been run over by a motorbike
Click to expand...

What kind of women have you been dating?

I get it if homeless women in their 60’s is your thing.
S

Stouffers said:
What kind of women have you been dating?

I get it if homeless women in their 60’s is your thing.
Click to expand...

I do, less hair in the teeth when chowing down on that shit.

Gashtronomy said:
I do, less hair in the teeth when chowing down on that shit.
Click to expand...

Never been a fan of scat-play, but it takes all kinds, I guess.
S

Stouffers said:
Never been a fan of scat-play, but it takes all kinds, I guess.
Click to expand...

Not sure if bants or just retarded?

Gashtronomy said:
Not sure if bants or just retarded?
Click to expand...

I've never masturbated a chinese women either but I am willing to give it a try.

“On average, female students said they had had 2.3 sexual partners, while men reported 3.7”

Well now I don’t believe anything you’ve reported in this study. These people are liars.

Gashtronomy said:
I would offer to lend a hand, but they need to learn how to shave that shit first
Click to expand...

The only correct opinion here, once you go clean shaven you can never go back.

Not surprised. I was fucking a Chinese girl from Taiwan in December and I’ve never heard anything like it. Also she wouldn’t suck dick.

I haven't masturbated in 10 years.

Still in the contest.

I've done my part to teach many Chinese women the art of the orgasm. FYI, they are not all hair bears, landing strips seem to be quite popular.
S

Lionel Richie said:
The only correct opinion here, once you go clean shaven you can never go back.
Click to expand...

You know it brother!

Stouffers said:
I knew a guy senior year in high school who used to openly brag he’d never masturbated or ejaculated. He was waiting for marriage.

Was it this guy?

It's only okay to climax if the government tells you to. Only Winnie gets the honeypot.

National survey collected by China -- I wouldn't admit to having sex either. You never know what those fuckers might be planning to do with the data.

Majority of women at Chinese universities have never met me.

Probably realistically because their benevelont dictator teaches them pleasure is shame 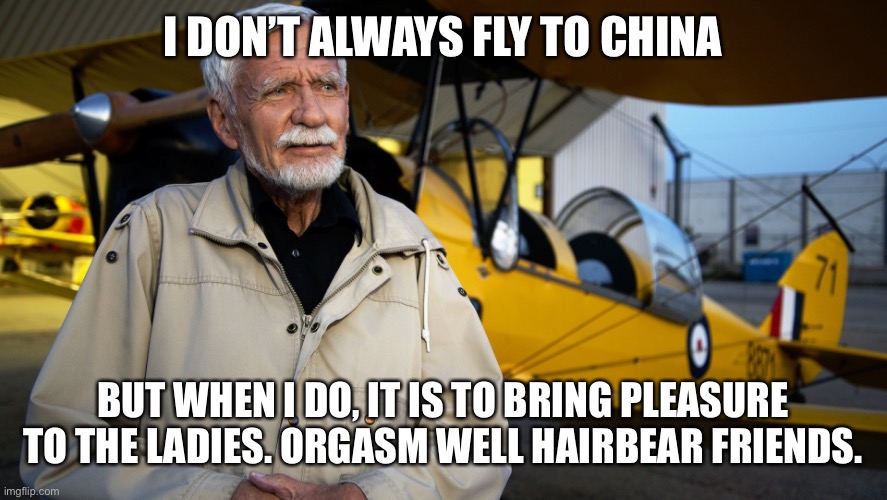 he fucked China so hard, he killed it.

I call BS on the masturbaiting.

I'm sure you'd get the same numbers here because girls are embarrassed to say they do.

I'll tell you a true story.
I shagged this Chinese girl, and she was not just hairy she had the longest pubes I'd ever seen in my life. I'm not talking maximum 80's bush here, but they actually hung down. Long like hair, no bullshit a good 2-3 inches in length vertically. Almost enough to put me off but I manned up and did the deed. If cameraphones of a decent affordable quality were available back then then I'd have got a shot of this freak of nature for Ripley's Believe It or Not. I remember nothing about this girl except for the super long pubage.

They obviously have never seen Larry David before.

Boaty McBoatface replied
Apr 15, 2022
‘Coregasms’ are one way to practice sexual self-care during the COVID-19 pandemic