Ever since the original PS2 Japanese editions, the game was never re-released on PlayStation platforms, only on PC and Xbox 360. It took more than 10 fucking years to come back on PS. 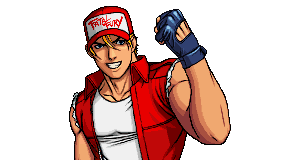 Dance your little heart out sir, I'm not into FGs but this is my one of my favourite pixel art gifs, which your Terry reminded me of:

I have them all on PS4, TKoF always had a charm to them ever since the 90's
I remember playing the Fatal Fury arcade machine in the local chippy and eventually got a copy
Definitely adding this to my collection!
Last edited: Jan 8, 2021

I can't wait
You must log in or register to reply here.

JohnSpartanLee replied
May 31, 2022
Neo Geo fighting game Rage of the Dragons coming to PS4, Xbox One and Switch