The Last of Us Part II will launch for PlayStation 4 on February 21, 2020, publisher Sony Interactive Entertainment and developer Naughty Dog announced. It will span two Blu-ray discs, according to Best Buy.

Here is a message from game director Neil Druckmann:

Thank you for being patient with us. Very patient. Even though we’ve been eager to share more about The Last of Us Part II and tell you its release date, we wanted to wait until we were close to wrapping up production and we were confident in the date itself. We have a bunch of new stuff to share with you today… starting with the fact that on February 21, 2020 the Last of Us Part II can finally be in your hands.

We began working on this game over five years ago. It’s hard to describe the immense pressure of following up the first game. We know how much you love this world and its characters—especially Ellie and Joel. Believe me, we’re fans as well. We love them. Which is why we spent years crafting a game that we feel will do them justice, telling a nuanced story that deals with the core question: how far would you go to exact justice against the people that hurt the ones you love? It’s a highly emotional story with complex themes that befit the world of The Last of Us. What we realized pretty early on is that we were putting together Naughty Dog’s most ambitious and longest game in our 35 year history. To tell this kind of story the game needed to be massive. Without spoiling too much, at the top of this post you can watch the brand-new trailer that we debuted earlier today on State of Play, which just scratches the surface of what the game has in store.

Alongside the trailer, we’re thrilled to reveal the various editions of the game, including The Last of Us Part II Standard Edition, Special Edition, Digital Deluxe Edition, Collector’s Edition, and Ellie Edition. In collaboration with PlayStation, we worked hard to make sure these versions would be truly special by including content and items drawn from the game and its characters.

Let’s kick things off with the Collector’s Edition, which includes a beautifully crafted 12” Ellie statue, a life-sized replica of Ellie’s bracelet, a custom SteelBook case, 48-page mini art book from Dark Horse, a set of six enamel pins, lithograph art print, and a set of five stickers. The Collector’s Edition also comes with a voucher for digital content, including a PS4 dynamic theme, a set of six PSN avatars, a digital soundtrack, and a digital version of the mini art book.

The Ellie Edition gives you all of the contents of the Collector’s Edition, plus a full-sized, fully functional recreation of Ellie’s backpack, an embroidered patch, and a 7-inch vinyl record featuring music from the original soundtrack. We’ll also have a Special Edition version that features the custom SteelBook case and all of the digital content found in the Ellie Edition and Collector’s Edition.

For those that prefer to go digital, we have the Digital Deluxe Edition, which includes all of the digital content outlined above, as well as a digital copy of the Standard Edition. If you pre-order either of these versions on PlayStation Store, you’ll instantly receive a The Last of Us Part II PSN avatar featuring Ellie’s tattoo. Additionally, if you pre-order any edition of the game, you’ll also receive two in-game unlocks at launch:

Hold on. We’re not done. Today, journalists from all over the world are going hands-on with two new levels at a press event in Los Angeles, playing roughly three hours of the game! Thankfully, you won’t have to wait long to see and hear more about it. Their impressions and videos will be going live this Thursday, September 26 around 8:00 a.m. PT, or, as many fans of The Last of Us know it: Outbreak Day.

Inspired by the day the cordyceps fungus reached critical mass, every September 26 we celebrate The Last of Us community and we’ve got some exciting things planned! Be sure to check back here and follow Naughty Dog on Twitter, Facebook, and Instagram for all the latest.

You are now months away from playing The Last of Us Part II. Your love for our games inspires and fuels us as we work hard and deliver an experience worthy of our fans. We are extremely proud of the game we’re crafting and cannot wait to share it with y’all.

Sooner than I expected.

It was a good trailer. Glad Joel is confirmed in.
And February is a good date. Take note, the PS5 should also be unveiled around that time.
Reactions: Kerotan Frog, HaveButOneLife, Duallusion and 4 others

Welp. Here goes the game of the generation.
Reactions: MrRogers, Gamernyc78, Heimdall_Xtreme and 1 other person
A

Ashley Johnson was correct after all, when she almost blabbed/ spilled the beans back in June. 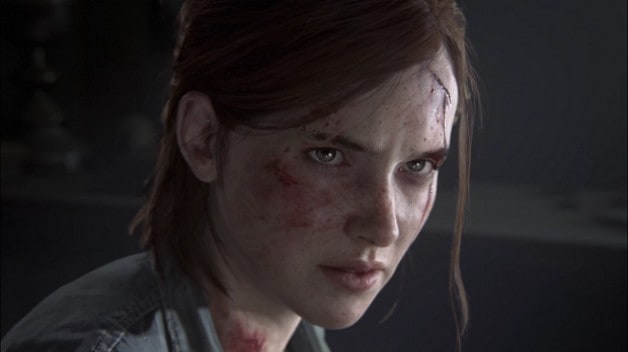 Ellie herself actress Ashley Johnson might have revealed a bit too much in a recent interview letting slip The Last Of Us II’s release date.


And Jason Shreier.
He got right both the Death Stranding and TLoU Part II releases

Fushitsusha said:
In before "It looks downgraded"
Click to expand...

Are you saying that cause you saw the downgrade?

Not too far off now. I would have guessed May myself.

Now we wait for the previews on thursday. Really good.

Screamer-RSA said:
Are you saying that cause you saw the downgrade?
Click to expand...

It definitely does not look as impressive as the ultra polished (that is speculated to be somewhat faked) E3 footage.
Last edited: Sep 24, 2019
Reactions: Lonely_Wolf1886, Nero_PR, Endless Fluff and 1 other person

. I started playing the first game years ago on ps3 and never finished it. Maybe I should jump back.

Looks great, but I'm holding off for the ps5 version, I don't wanna make the same mistake that I made with the first one where I played it over psnow, and later when I got a ps4 I couldn't finish it again cause I just didn't feel like playing through it again, it's a longer wait for sure, but at least I wanna play the better performing version

Since i watched the damn trailer.
Is this based on her getting raped and the game a revenge story?
Or are we gonna get some actual story?
Last edited: Sep 24, 2019
S

First time a naughty dog game hasn't looked like a big leap over what we already have for me. In for the story assuming Joel has a decent part.

The twist is, not her girlfriend gets shot there but Joel. She can't cope, goes on a revenge spree while creating a Joel image in her head traveling with her.
Reactions: Yu Furealdo, FloatingIslands, Winters_Solace and 22 others

It looked fine to me. Couldn't tell if it was downgraded or not, but either way it looked good graphically.

Fushitsusha said:
It definitely does not look as impressive as the ultra polished (that is speculated to be somewhat faked) E3 footage.
Click to expand...

Agreed, I remember seeing that and thinking to myself it will never look/play like that.
Reactions: ziguiriguidum and geniusaneta

I'm not too fussed on the story, the first one was hardly a bastion of originality. It excelled in the delivery and execution though. Whatever the paper thin plot is doesn't really matter. I have some qualms with ND but it looks a fucking great game.
Last edited: Sep 24, 2019
Reactions: Ian Henry, Soleil rouge, bigDdestruction and 2 others

Got what I wanted and sooner than I expected. Now, let's the madly expensive collector's edition...

It's on 2 discs apparently?
Reactions: cormack12

Fushitsusha said:
In before "It looks downgraded"
Click to expand...

Honestly was my initial thought in the snow environment but then they showed environments reminiscent of that E3 trailer and it looked the same, and the animation in the gameplay snippets held up. Just need to know if it is as smooth and seamless as the E3 trailer in moment to moment gameplay

Spukc said:
Since i watched the damn trailer.
Is this based on her getting raped and the game a revenge story?
Or are we gonna get some actual story?
Click to expand...

Seems pretty obvious that they execute her girlfriend in front of her, don't know if she gets raped though...
Reactions: levyjl1988, Kamina, Hayfield and 1 other person

So Last of Us 2 in February, FFVII Remake in March, Cyberpunk in April. That's just the first four months...I honestly think 2020 will beat 1998 and 2007.
Reactions: Soleil rouge, Tahj and Bryank75

First game: Ok, so in the dlc we are going to subtly expose the psyche of our main character, and how in this apocalyptic and desolated land, she finds solace, protection and a reason to feel alive in her best friend, Riley, who tragically dies. This is how we learn that our main character is in fact immune to the virus.

I love the last of us. But come on, this is poor writing.
Reactions: GC_DALBEN, Boaty McBoatface, ValiantTraveler and 9 others

Get ready for at least one of those to be delayed.
Reactions: Touch fuzZy. get BizZay

According to Best Buy the game is releasing on 2 discs 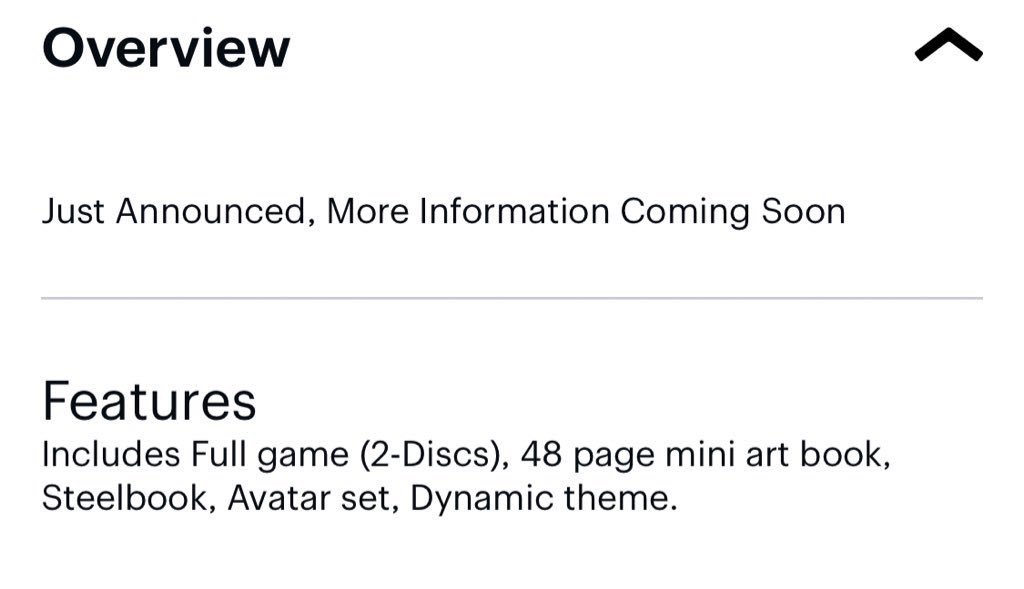 What I will say though is at this point I'd honestly be more surprised if Joel ends up surviving the whole game/isn't dead already. Seems like a nailed on ND trope to have him die/be dead.
Reactions: BootsLoader

As long as you own a PlayStation 4...
Reactions: demigod and BootsLoader

Did the over the shoulder camera looked more drawn in? Can't remember from the first

The last year of PS4

BibleBLACKED said:
The twist is, not her girlfriend gets shot there but Joel. She can't cope, goes on a revenge spree while creating a Joel image in her head traveling with her.
Click to expand...

DonF said:
First game: Ok, so in the dlc we are going to subtly expose the psyche of our main character, and how in this apocalyptic and desolated land, she finds solace, protection and a reason to feel alive in her best friend, Riley, who tragically dies. This is how we learn that our main character is in fact immune to the virus.

I love the last of us. But come on, this is poor writing.
Click to expand...

You’ve got to give her some stakes to take away, even if it makes you uncomfortable. It was established she likes the ladies. Rewriting her as straight would be dumb at this point
Reactions: alabtrosMyster and Bryank75 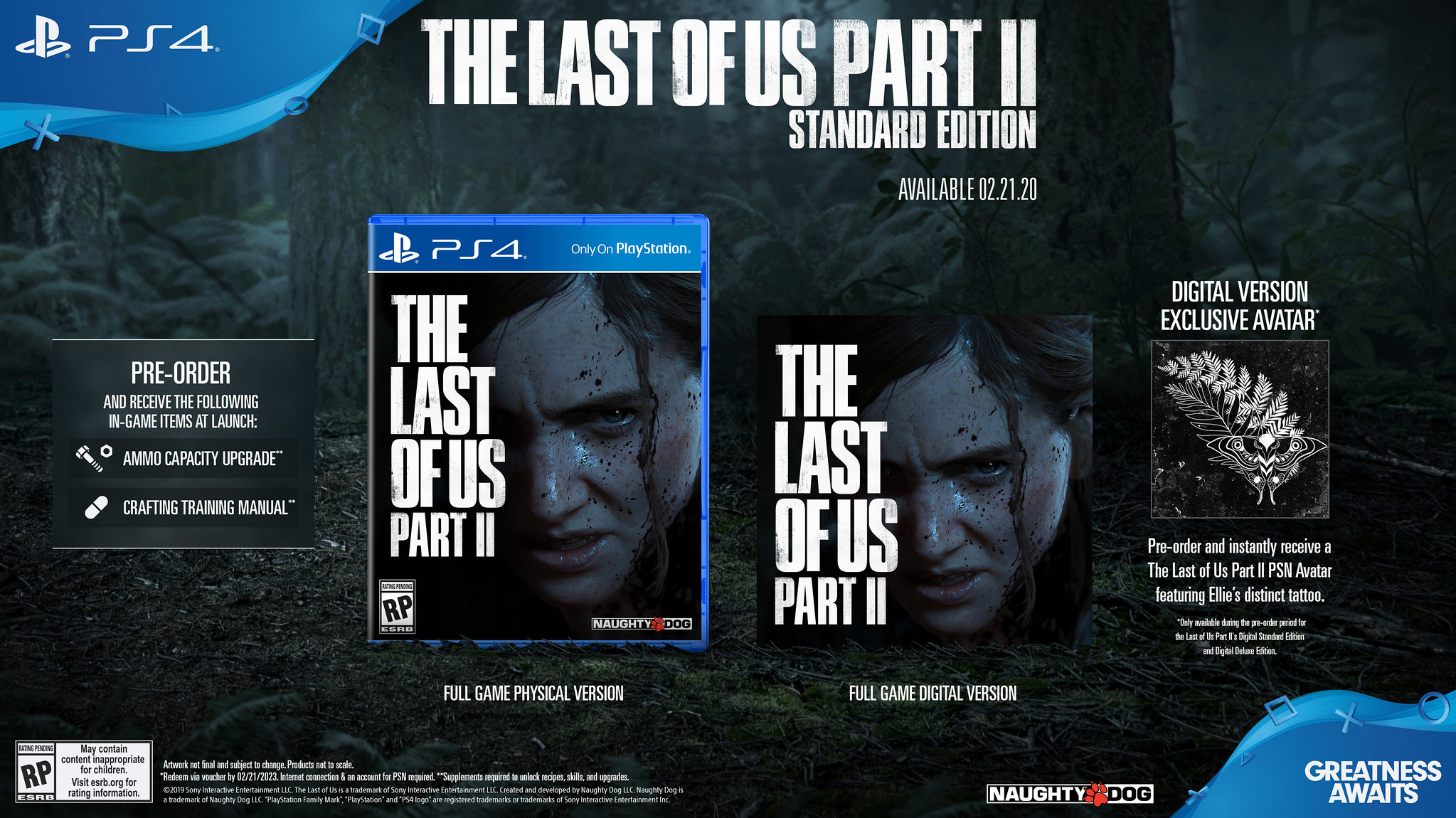 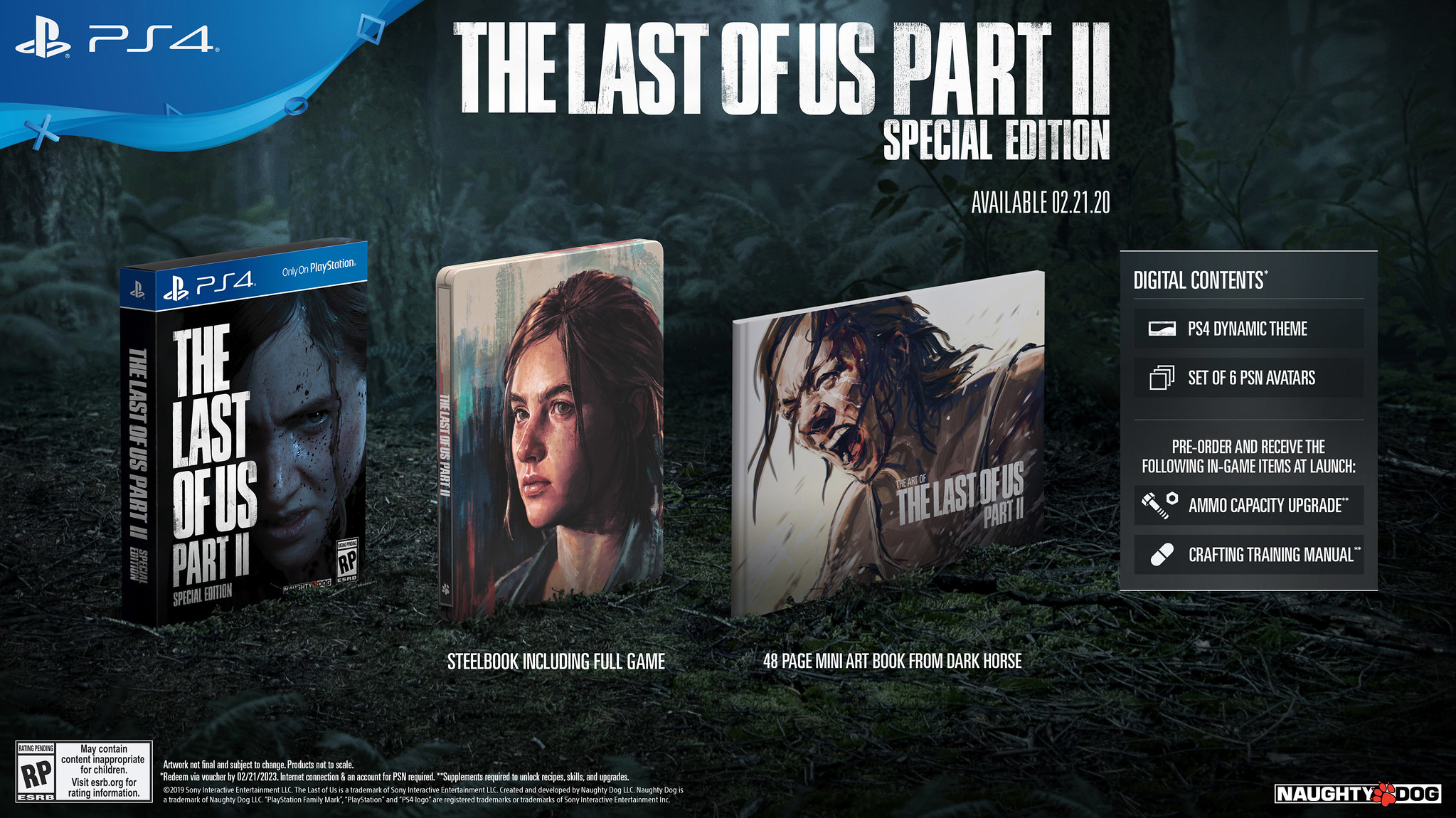 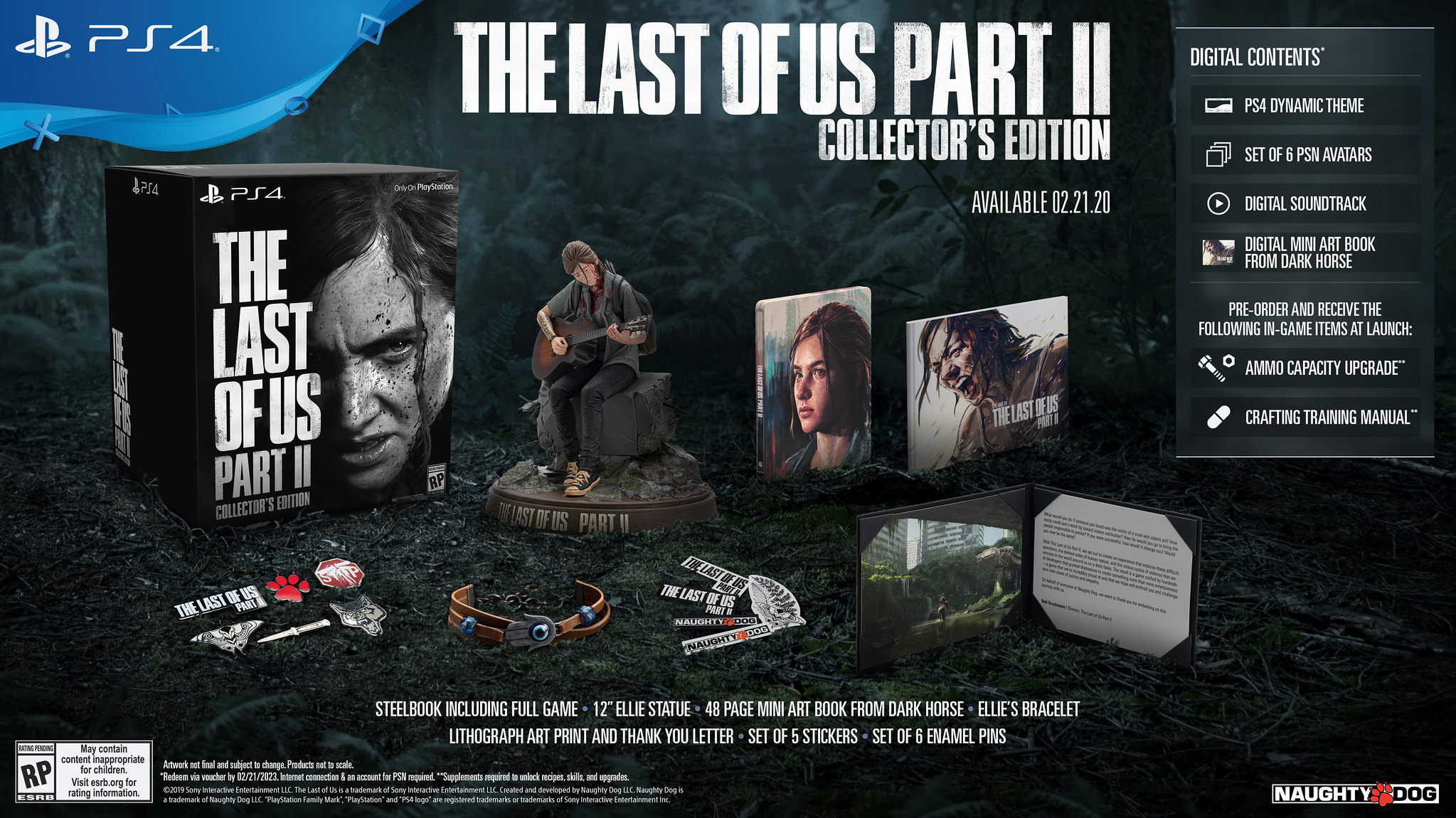 Reactions: rəddəM, DonF, Doom85 and 10 others

Yoooo... this legit then, right before GOAT of GOATS CyberPunk..I like that

State of Play: New Trailer For The Last of Us Part II

Watch the new trailer, just debuted during State of Play.

Cant Wait to play it

LMAO the fucking cover on that book
Reactions: God Enel, CyberPanda, TheGreatYosh and 2 others
D

Damn, that looks fantastic. I hope it runs well on the PS4 Pro... Either way, I think I'm gonna start up a playthrough of the Remastered version of TLOU. Never did play more than an hour or so of it when it came out (I did beat the original release on PS3, though).

Looks cool but I think Naughty Dog has to learn something from Santa Monica Studio.

I don’t know story wise (don’t like the gf revenge thing) but for gameplay and graphics I think I got more than I originally thought/wanted!
The game will be perfectly executed as far as I know ND, no way they screw this.

Maybe I should play the first game
Reactions: Fake, Hayfield, Nero_PR and 4 others
You must log in or register to reply here.