its pretty terrifying to imagine being there as it's literally breaking free from the ground.

Reactions: NeoIkaruGAF, CyRuZ, King of Foxes and 4 others

Wow nice thread, so many interesting things, I like this kind of things
Reactions: Ememee, LemmingWithaParachute and Kev Kev

Kev Kev said:
so wait is it real or fake?
Click to expand...

Look at the bottom/far right duck, it's not properly tracked to the ground so it kinda slides around.
Reactions: Kev Kev

Kev Kev said:
i was hoping for a bit more in this video. still, its insane how well they can mimic the human voice

I used to have an African Grey, and that bird could say hundreds of things. And he would use them appropriately in context. I used to cover his house at night and ask him, "Are you ready for bed bird?" (I often called him "bird" even though his name was Milo.) And he eventually would start saying, "Are you ready for bed bird?" whenever he was tired at night. And he only said it then. So I would cover him, since he let me know he was tired, and wanted the dark.

He also used to say, "I want to come out" all the time after he learned that phrase.

One of the funniest things he did was regarding his food. In order to make sure he got proper nutrition, I fed him a pelleted formula called Roudy Bush. He didn't have to only eat that, but I made sure he would get it regularly for his health. But...he *hated* to eat it. And he would reach into his bowl with his feet and throw it out all the time. I used to say, "You are being a very bad bird, very very bad." when hid did. And he picked up on that and would say it himself whenever he was throwing those nasty pellets out of his bowl, and I would crack up.

And he said so many more things. But he was very possessive of me, as these birds can sometimes be. And when my child reached toddler stage and was walking around and was tall enough to reach the bottom of the cage, I was afraid that she might reach in and lose a finger, and I couldn't accept that. So I had to find a home for Milo. I hated doing it though. I hope he's well, wherever he is now.

Greys are such great pets though. It's one of the few animals I've ever been around that I could tell was observing and studying me as closely as I was it. Their eyes are absolutely intense and penetrating if you watch them up close and personal and get to know them.
Last edited: Mar 13, 2020
Reactions: El Pistolero, Ozzy Onya A2Z, Ememee and 6 others


Saw this while having my morning coffee. They're in love aww.
Reactions: Stiflers Mom, Insane Metal, MetalAlien and 2 others

Army ants are cool but so aggressive in raids.

but storm surges are scarier

kingbean said:
Look at the bottom/far right duck, it's not properly tracked to the ground so it kinda slides around.
Click to expand...

savage. i feel bad for the little bees. also crazy how the hornets use a chemical to rally together and basically go into rage mode
Reactions: CloudNull and Tesseract

Rob Mulder went with Expeditie Grunnen to a small animal show in Zuidbroek in the province of Groningen in the Netherlands. He is meeting with Frederik van Wijk. Did you ever hear a laugh like this?
Click to expand...

unbelievable how much pollen is on these trees.

Kev Kev said:
unbelievable how much pollen is on these trees.

Oh trust me I know all about this shit. I am allergic to the whole damn planet. I wouldn't even know if I had corona right now.
Reactions: Insane Metal and Kev Kev

MetalAlien said:
Oh trust me I know all about this shit. I am allergic to the whole damn planet. I wouldn't even know if I had corona right now.
Click to expand...

i feel for ya buddy. i dont think my allergies are quite that bad, but my seasonal allergies are pretty insane. i'll usually get to a point where i have to do a netty pot for like 7 days in a row and start using flonase everyday. but that usually does this trtick and after that i just have to keep buying and using flonase until they start to subside. im sure youve already tried all that, but in case you havent, check out netty pots and flonase, its been magical for me.

also, TIL that moose will shed the skin of their antlers regularly and it look absolutley disgusting. they use shrubbery to help get off all the dangling, peeling skin. i also learned that some species of deers, their antlers will fall off once a year, and grow back during summer. craziness 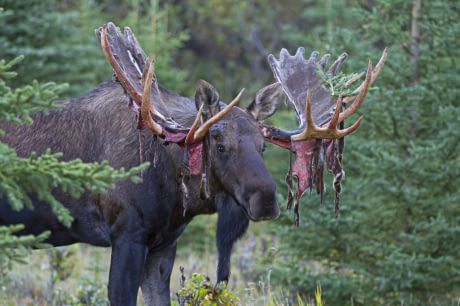 I learned of this late, but I didn't know locust plagues were still a thing.

Those videos of pollen... ngl I found them awemsome. The last one reminded of fairy dust from Peter Pan.
Reactions: Kev Kev

DeafTourette said:
I had subscribed to Daryn Wood ... Loved her long form movie reviews. Even if I disagreed with her, she gave a thoughtful explanation of what she thought. I still have to listen to her last one. Not sure when she's coming back.
Click to expand...

As someone who has never seen more than 3 inches of snow at one time, that freaks me the f out
Reactions: Kev Kev

this bioluminescence stuff is the coolest shit ever. always wanted to see it in person. i live in florida and im almost certain ive heard of kayaking tours certain times of the year where it happens down here.

anyway, heres an awesome video of it, with some dolphins swimming around too. super cool!

i would be so pissed if that was my car lol
Reactions: nikolino840

I like when at 2:20 the Ibex looks the baby one like to check if it's ok
Reactions: haadim, Holgren and Kev Kev

thats some skyrim shit
Reactions: NeoIkaruGAF, Alright, Despera and 2 others

Damn, even our ducks are like that in Germany...

A Bug's Life 2 should be about this.
Reactions: Kev Kev

Stiflers Mom said:
Damn, even our ducks are like that in Germany...

Yeah but comes out that is fake this video

weird, slightly grosse and utterly fascinating... it appears their spine is pushed out through their mouth when they yawn

that must have been surreal to see in person.
Reactions: Tesseract and CyRuZ

lol, this is crazy to me. aparently, monkeys will also peel the stringy bits off of a banana i was cracking up watching this. why tf do we do that?

when it's time for me to die, i wanna lower myself into a volcano
Reactions: EverythingsOverrated, nikolino840, DESTROYA and 1 other person

just look at that hellscape. unbelievable. thats like straight out of a Doom level. can't imagine seeing it in person.

when it's time for me to die, i wanna lower myself into a volcano
Click to expand...

sorry i had to lol
Last edited: Jul 18, 2020
Reactions: EverythingsOverrated, nikolino840, DESTROYA and 1 other person

some of these are actually hilarious

and most of these idiots were askin for it...

Kev Kev said:
so TIL that icebergs sometimes flip over
Click to expand...

I guess these people didn't know either

Just saw it. It's like God dropped a giant deuce and it's turning around in the giant toilet known as earth.
Reactions: Kev Kev

macfoshizzle said:
this killer mushroom infects ants and grows out of its head and infects other ants.. the other ants says "fuck this guy" and takes him way out of the colony so it doesn't infect others.

Wasn't the Last of Us based on this? I remember reading something about it. I could be totally wrong though.
Reactions: El Pistolero and Kev Kev
M

Utterly beautiful. Just imagine being in the middle of it like a Disney princess IRL.

Mason said:
Utterly beautiful. Just imagine being in the middle of it like a Disney princess IRL.

Half a billion bugs in the air would be horrifying if you were actually there.
Also, it seems like the rotors are exposed from below and one butterfly almost gets a leg chopped off.

Pretty cool, but there are clearly cameramen there too so the drone is a bit gimmicky.
Reactions: Kev Kev
You must log in or register to reply here.