WE DID IT!: Steam Link App By Valve Finally Hits tvOS & iOS!

Valve's Steam Link app, which is designed to let you play Steam games on your iPhone, iPad, or Apple TV has finally made its way to iOS and is...

“Apple said that it would continue to work with Valve to "bring the Steam experience to iOS and Apple TV in a way that complies with App Store guidelines, and it appears the two companies were finally able to reach an agreement.

Valve said that it would remove the ability to purchase apps from within Steam Link in an effort to get Apple to approve the app, which may have allowed it onto the App Store. When connecting Steam Link to a PC or Mac, the main view is of your library, aka the games you've already purchased, and there is no readily apparent option for purchasing content directly on your iOS device.

The new Steam Link app for iOS lets you play your Steam games on an iPhone, iPad, or Apple TV by streaming them from a Mac or PC. The Steam Link app essentially mirrors the content on your Mac or PC to your device. iOS 10 or later is required, and Valve recommends using 5GHz internet connections for the best performance. Games can be played using a Made for iPhone or Steam controller, and there are also touch screen control options that put virtual buttons on the screen.”

So yeah, you can only see your own content, which was expected, but can pair an MFi or (surprisingly to me at least) Steam Controller. I know this will make some people happy!

That`s great, but I hope its streaming performance gets better. Moonlight is in my opinion miles ahead in performance, and does exactly the same.

Haven’t used moonlight in any meaningful way, so I can’t comment on it. More options are always good though, right? 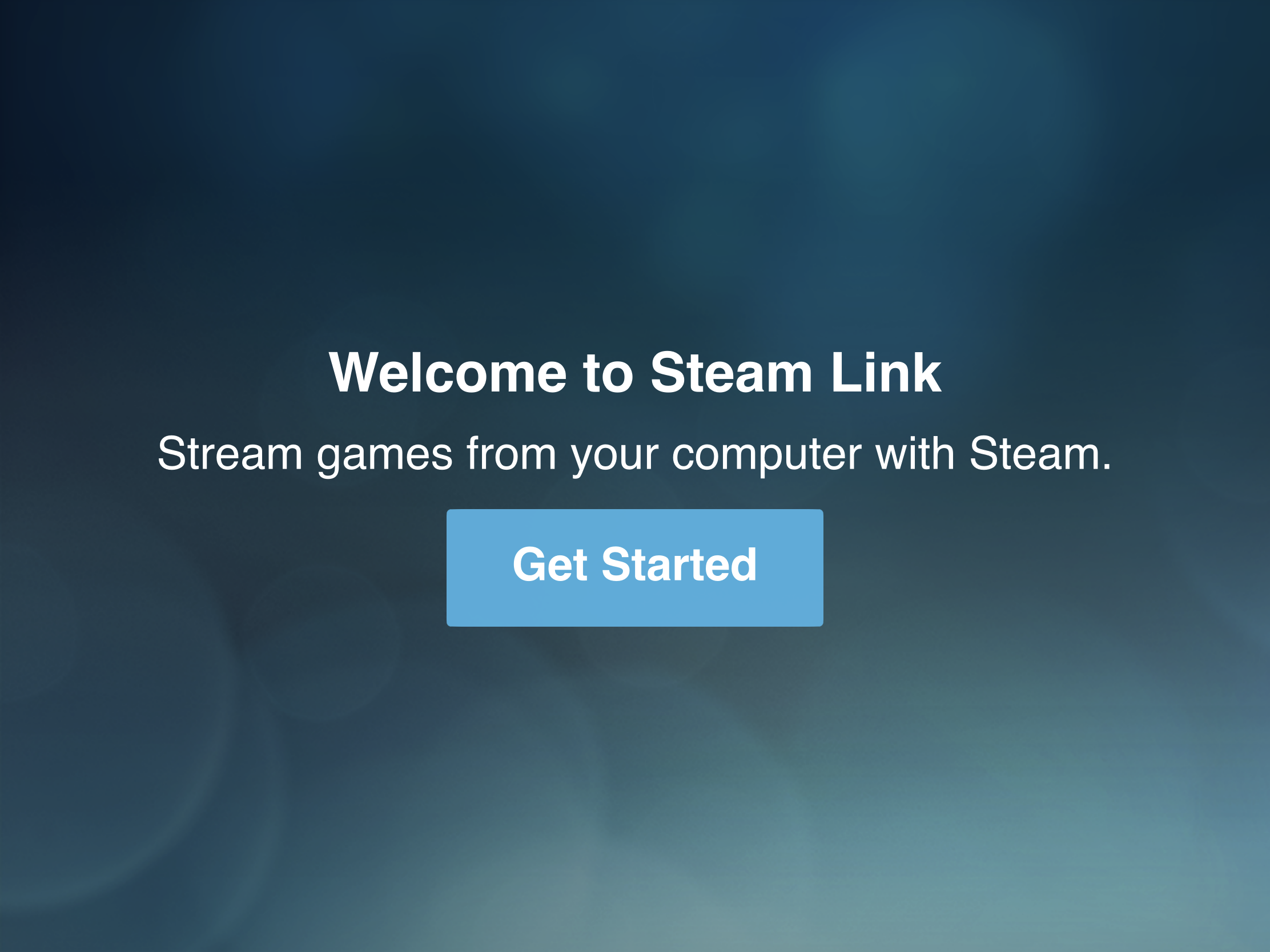 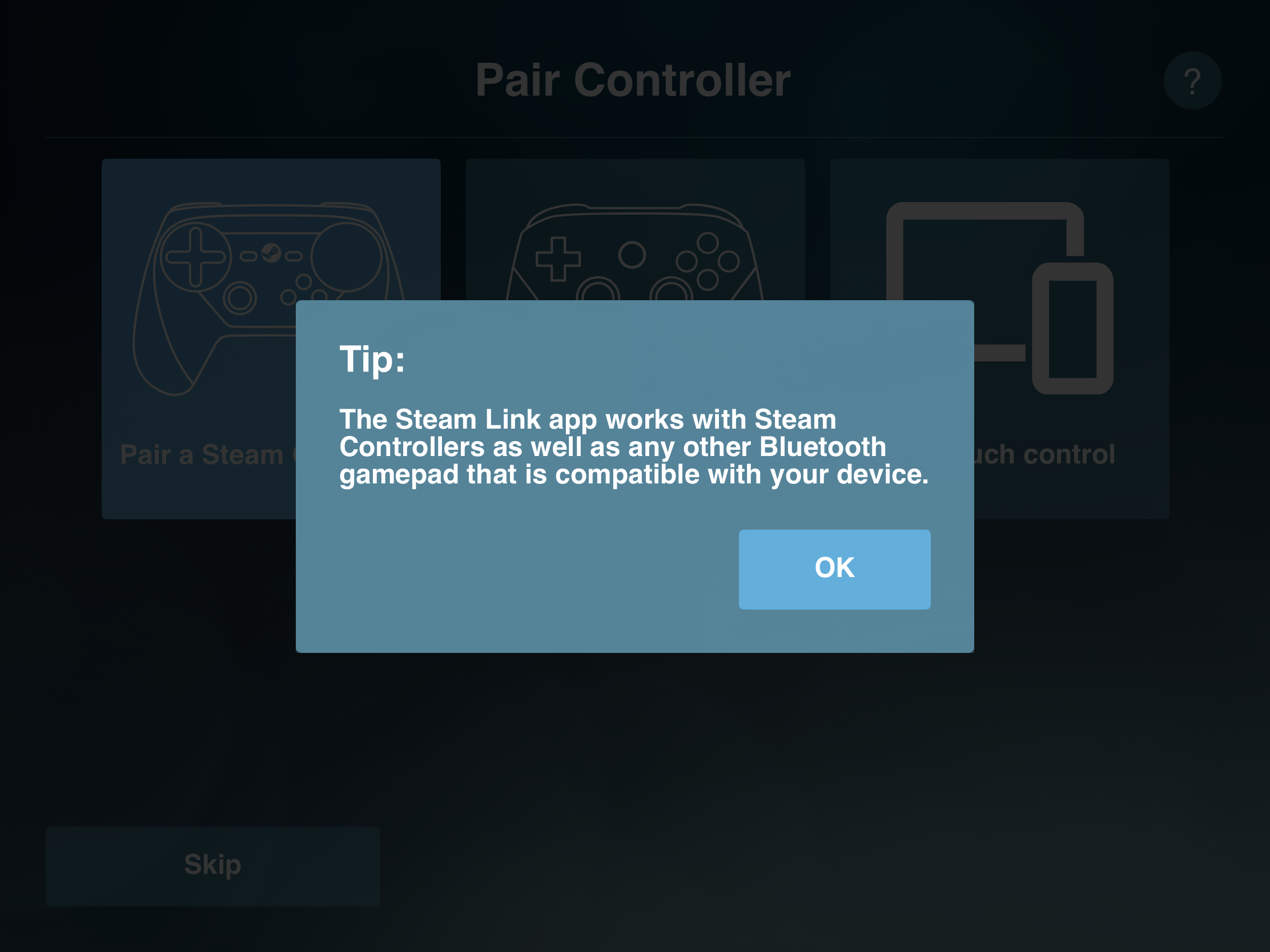 So this is the setup screen. Notice that it mentions specifically Bluetooth (in this case MFi) controllers. Does this mean that hard-wired lightning options from like Logitech and some others don’t work with this? I can’t test a wired controller at the moment though.

Nice! I'll need to buy new Apple TVs though, as the older ones don't have apps.

Definitely looks like the ability to purchase Steam games via the app was the major sticking point with Apple. They probably wanted a 70/30 revenue split with Valve (who themselves already have a 70/30 revenue split with the publishers). Glad to see it's all sorted now - I can't imagine someone would actually want to purchase games on Steam while streaming to their phone, but there you have it. 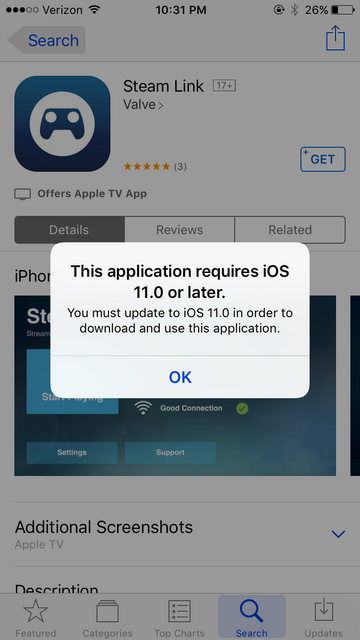 I can choose between playing DOOM, SNK fighting games, or updating to iOS 11 for this app. I wish Apple had a compatibility mode.

Yeah, that was an excerpt from the actual article. But thank you for letter us know, I’ll add this info to the OP.

I’ve been messing around with the App for a bit. I have a Steam controller paired and it seems to work fine enough. The video quality is good at 1080p. What’s weird to me, is the input latency. It’s really, really noticeable. I have my PC close enough that I’m using my Xbox One controller paired to it, and just using the Steam Link app for video streaming. It works fine enough for my situation. I’m glad Valve and Apple were able to get this released, but I’m sure there’s more optimization to be done.
D

It's one of the few gaming-focused remote desktops that can stream from a Mac, so I've been hoping it made it over to iOS, but the latency's not great. It still doesn't have hardware encoding in OS X and takes up WAY more CPU than Jump Desktop, seems to be lot letting go of the mouse and dragging around when clicking.

Remote cursor is pretty stuttery, but it'll automatically switch to whichever monitor the mouse is on? That's pretty cool.

Beats Moonlight in that you can click anywhere instead of dragging the mouse around on a touchscreen, and actually works on OS X, but pretty disappointing for the most part. Guess I'll continue to hope Parsec gets onto iOS and maybe Mac one day.

Gamezone said:
That`s great, but I hope its streaming performance gets better. Moonlight is in my opinion miles ahead in performance, and does exactly the same.
Click to expand...

My experience is completely opposite. Tried moonlight every so often but it was steam streaming that blew me away with performance and seamlessness. I play all pc games that way now.

ljubomir said:
My experience is completely opposite. Tried moonlight every so often but it was steam streaming that blew me away with performance and seamlessness. I play all pc games that way now.
Click to expand...

Moonlight and Parsec are smooth on my Android. Steam Link is decent at best.

Awesome, can't wait to try this out.

It seems they removed features to appease Apple. No access to the Store or Community area. Just Library.
Last edited: May 16, 2019

Gamezone said:
Moonlight and Parsec are smooth on my Android. Steam Link is decent at best.
Click to expand...

I tried a bit last night playing Dead Cells and it ran pretty well using the steam controller. At first I just started playing and I could see some bad video compression and noticed some slight input lag. I then went into the settings and changed from balanced to beautiful and the graphics were nice and the input lag was much better.

I did try without the controller and used the touch controls but it brought up a digital joystick and buttons. I really wanted to use this for playing Visual novels and was hoping you could use the touch like a mouse but not sure where or if there is an option for that.

Damage Inc said:
It seems they removed features to appease Apple. No access to the Store or Community area. Just Library.
Click to expand...

Wow this just made my switch a whole less interesting xD 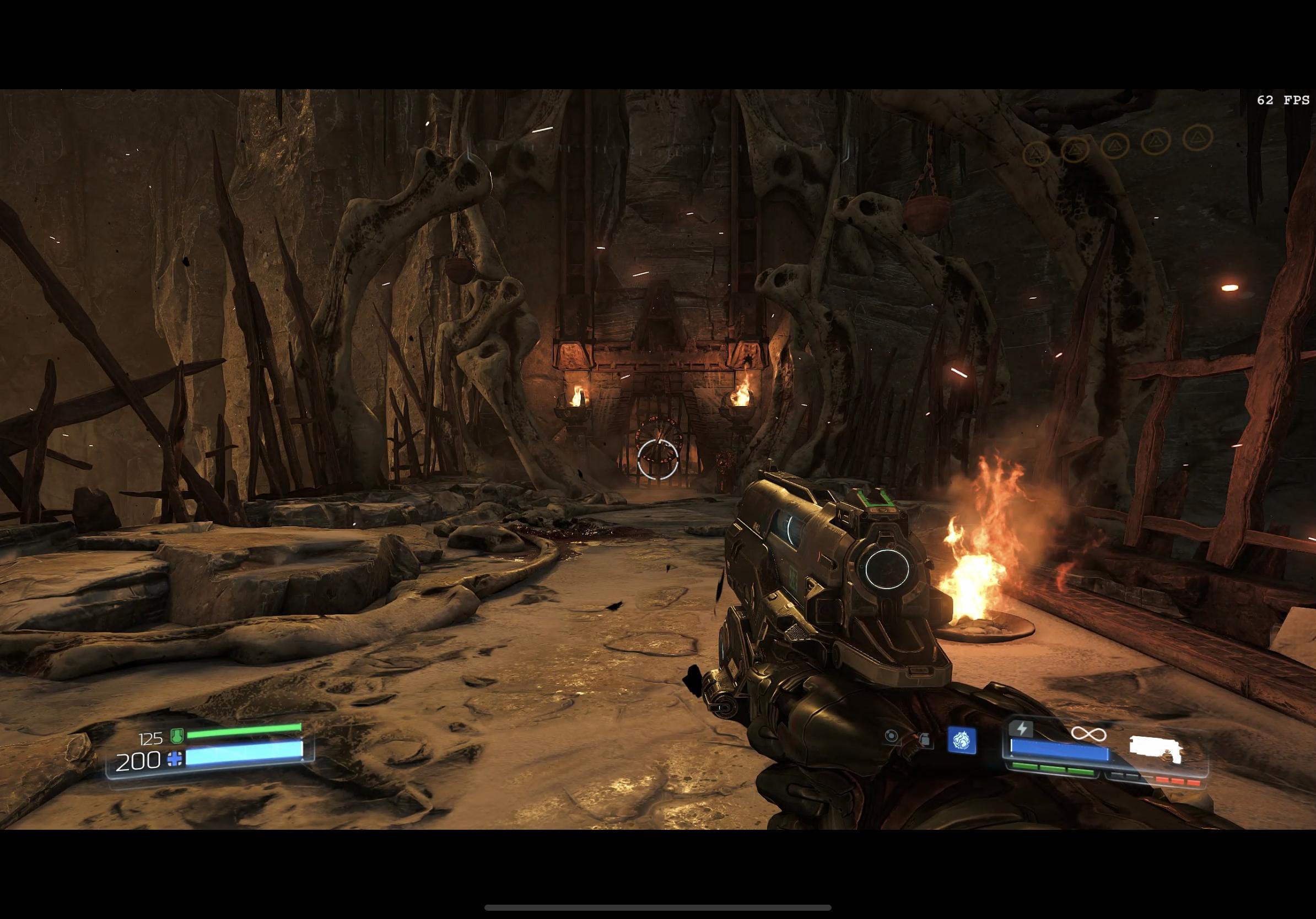 Made a screenshot on the ipad while streaming doom 2016. The quality is mad sharp!
No noticeable input lag and no hickups. Pc is wired on network. Ipad pro 11inch running on 5ghz network.using the nimbus gamepad.

Make sure you switch your TV into Game mode.

So why isn’t Sony allowing the DS4 to pair with their Remoteplay app on iOS? I mean, more ds4’s sold right?

Shmunter said:
So why isn’t Sony allowing the DS4 to pair with their Remoteplay app on iOS? I mean, more ds4’s sold right?
Click to expand...

Most people want to play games longer then 34 minutes.
So the problem is about the battery life of the dualshock 4.

Spukc said:
Most people want to play games longer then 34 minutes.
So the problem is about the battery life of the dualshock 4.

This works amazingly well. I just have two questions:

1. How do I pair an Xbox one controller or DualShock 4 with my phone?

2. How does the steam link box work? Does it allow me to access my library while my computer is shut off?
Last edited: May 17, 2019

1. How do I pair an Xbox one controller or DualShock 4 with my phone?

2. How does the steam link box work? Does it allow me to access my library while my computer is shut off?
Click to expand...

Okay so I answered my own questions.

1. It doesn’t. iPhone doesn’t play well with Xbox or PS4 controllers. So I ordered a steam controller and a custom bracket that will hold my phone on it. I’ll let you know how well that works when I get it working myself.

2. It doesn’t work while you PC is off. But it can remotely turn your PC on.

I’ll update y’all and let you know how well it works with the Steam controller and bracket.
Last edited: May 31, 2019
You must log in or register to reply here.