Executive produced by George Pelecanos (The Deuce) and David Simon (The Wire) -- and based on the book by Baltimore Sun reporter Justin Fenton -- We Own This City is a six-hour, limited series chronicling the rise and fall of the Baltimore Police Department's Gun Trace Task Force. It examines the corruption and moral collapse that befell an American city in which the policies of drug prohibition and mass arrest were championed at the expense of actual police work.

The cast includes Jon Bernthal (The Walking Dead, Show Me a Hero), Josh Charles (The Good Wife, In Treatment), Wunmi Mosaku (Lovecraft Country), and Jamie Hector (BOSCH, The Wire), among many others. See the full cast here.

Jon Bernthal as Sgt. Wayne Jenkins of the Baltimore Police Department, perhaps the central figure in the sprawling federal corruption case that centered on the agency's Gun Trace Task Force, a plainclothes unit that went completely rogue and began hunting and robbing citizens and drug dealers alike as decades of a relentless drug war and mass incarceration in Baltimore spun wildly out of control.

Josh Charles as Daniel Hersl, a cocky, swaggering cop known amongst Baltimore residents for his casual brutality and was the subject of multiple citizen complaints. Hersl was effectively banned from the Eastern District before his move to the GTTF.

Jamie Hector as Sean M. Suiter, a Baltimore City Homicide detective who was caught up in the GTTF case and called to testify before a federal grand jury. Tragically, Suiter finds he can’t outrun his past.

Darrell Britt-Gibson as Jemell Rayam, One of the most brazen offenders caught up in the GTTF probe. Rayam committed racketeering, extortion, overtime fraud, robberies and unlawful detainments; entered residences without a warrant; and was involved in three shootings that resulted in one fatality. Over the years, he was targeted in multiple investigations by the Internal Affairs Department but suffered few consequences.

Rob Brown as Maurice Ward, another plainclothesman with the Gun Trace Task Force, who participated in many of the robberies, thefts and illegal activities of the unit, but was bothered by that participation throughout, sometimes tossing away the proceeds from the crimes. When confronted by the federal investigation and charged with the rest of the unit, he was among the first to cooperate unequivocally with prosecutors.

McKinley Belcher III as Momodu “G Money” Gondo, an 11-year BPD veteran and member of the Gun Trace Task Force, implicated in robberies, overtime fraud and other corrupt acts. He was involved in protecting a heroin operation run by Antonio “Brill” Shropshire. Gondo served as an information line and protector to Shropshire, and took little effort to hide this connection.

Wunmi Mosaku as Nicole Steele, an attorney assigned to the Civil Rights Division of the Department of Justice, which was investigating policing practices in Baltimore prior to the Gun Trace Task Force criminal investigation. Focused on creating a voluntary, monitored federal consent decree aimed at reform, Steele’s work centers on the systemic reasons police corruption and bad behavior are excused by Baltimore City prosecutors, judges and the police department itself.

Dagmara Domińczyk as Erika Jensen, a New York native who, compelled by the 9-11 terrorism to join the Bureau, conducted the federal investigation into the corrupt GTTF officers along with Task Force Officer John Sieracki.

Chris Clanton as Brian Hairston, a Baltimore cop who isn’t afraid to speak up when he sees police misconduct or unsound strategies.

David Simon returning to Baltimore. Based on real events. Some recognizable faces from The Wire return for roles.

There's also a podcast to follow for those into the story:

We Own This City Podcast

The official podcast of the HBO Original Limited Series, We Own This City. Over six episodes, host D. Watkins will share his experiences in and out of the writers’ room and speak to the people who brought this story to the screen, including executive producers George Pelecanos and David Simon, actor


I thought the first episode assumed the viewer had a lot familiarity with the book / story, as they don't spend a great amount of time with exposition or setting up any cliffhangers. But it's good crime drama, with shades of The Wire at times.
Last edited: May 19, 2022

Really looking forward to this one. I need to rewatch the pilot, i felt confused at times and had a hard time figuring out who was who. Going to bank a few before i watch because i am watching two other shows that are similar and I think thats causing confusion/overlap

god dam first episode was way better than I expected. The wire is back !!

It does not look interesting.
J

Well, give 'em credit for keeping the cast correct to the historic people, but I guess all the feminists are not clamoring for more women to be represented as brutal corrupt cops

Now they need to do the 70's era NYPD anti-robbery unit that would stake out places, wait for a robber to show up, and then blast them dead on the spot. Fucking amazing stories from those guys. Probably not what NYC wants to remind folks of these days though

Eh, first episode didn't really do much for me. Just kinda, I dunno, dry and clinical, if that makes any sense.

They're interviewing David Simon for the May 5th podcast:

The first question posed on the subreddit is a great one:


gdshaffe said:
An early scene in "We Own This City" shows Jenkins knocking a liquor bottle, encased in a brown paper bag, out of a man's hand with his baton, smashing it. For fans of The Wire this seems like an obvious callback to Bunny Colvin's speech to his troops in which he praises the respect shown for the paper bag as an example of civic compromise between cops and citizens. Is it reaching to interpret that scene alone as a statement that that sort of civic compromise is dead and that the problems depicted in The Wire have only gotten worse?
Click to expand...

I have never watched the Wire.

Nah it's overrated and would probably feel like a relic to watch in this day and age.

Bernthal is so fucking good in this.. guy just jumped to the top of my actors list

I just saw the Jordans and started smacking.. I hit hard as a motherfucker too my bad LOL

The second episode really picked up the pace. The actor they got to play Bernthal's training officer has the most spot-on accent from that region I've heard on TV / Movies. It's from outside of Baltimore, a little country for that area. It wouldn't surprise me if he's actually from there.

One thing this show lacks that The Wire had was moments of tension and uncertainty. An inevitable result given it's based on a true story I suppose. But it's the key component I feel other fans of The Wire will miss with this. When the end music queued up in The Wire there was typically a cliffhanger feeling, knowledge that the viewer may be surprised with what happens next. With this show it's more like "well that was entertaining, but I'm not in a hurry to watch the next episode".

This show should have been a full series. It's really good so far and it makes me miss The Wire.

March Climber said:
This show should have been a full series. It's really good so far and it makes me miss The Wire.
Click to expand...

Yea, I wish there was more too, but it's a true story so I guess a limited series was all they could do given the length. 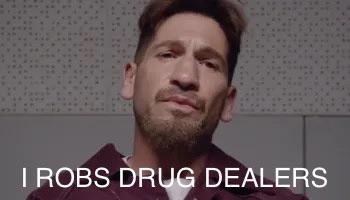 this is the best TV we've gotten in a while.. it does a really good job showing how a fucked up system creates men that are praised by their superiors the entire way through until they land in jail and then everyone turns their backs. really nuanced and complicated subject to tackle. John B absolutely kills it; I cant get enough
Last edited: May 19, 2022

The finale was not what I was expecting. A trip down memory lane as we watched the officers fall from grace.
You must log in or register to reply here.

Lime replied
Nov 10, 2016
One Woman's Predictions About Trumps 100 Days and the Midterms
2