Which characters should be included in a hypothetical Fighters Megamix 2?

It's been 23 years since the release of the much loved original on the Sega Saturn. The gameplay was a fun mix of Virtua Fighter 2, Virtua Fighter 3 and Fighting Vipers. It had an eclectic mix of Sega characters, including the car from Daytona USA. While I know lots of people are begging for a Virtua Fighter 6, I'd be happier with a Fighters Megamix sequel (even if Sega got lazy and just based it on the VF5 engine).

There are more than ten hidden characters from other Sega games. They are unlocked by completing all of the single-player mode sections except for Novice Trial, which unlocks a separate costume for Candy.[5] Each character either plays as a Fighting Vipers character (with armour that can be smashed off) or a Virtua Fighter character (without armour):

Bark the Polar Bear – one of AM2's creations for Sonic the Fighters.[6] Bark is a cream bear with large tufts of hair sticking out from the front and back of his 'beanie' hat. He wears a scarf and mittens. His alternate costume is a Santa Claus-esque suit. He plays like a Virtua Fighter character and is unlocked by defeating the 'Muscle' section. He retains his home stage from Sonic the Fighters, albeit without the walls and with the background music from Sonic the Fighters's Flying Carpet stage instead.

Bean the Dynamite – the other of AM2's creations for Sonic the Fighters.[6] Bean is a green duck who wears a neck-a-chief and Sonic the Hedgehog's shoes, without the socks. He is based on the Sega arcade game Dynamite Dux, hence his name 'The Dynamite'. In his alternate "costume" in this game, he becomes blue and looks exactly like the character Bin from that game. His trademark bombs are still present, though changed in appearance and some functions, but he still has his three main bomb-related moves (overhead bomb spread, bomb kick, and tossing a bomb onto a fallen foe and covering his ears). He plays like a Virtua Fighter character and is unlocked by defeating the 'Muscle' section (though he is not fought until the Bonus section). His home stage is not his own from Sonic the Fighters but actually Knuckles', the South Island stage.

Deku – The only original character created for the game, Deku is a comical Mexican green bean in a hat.[6] When his hat is smashed off, a bird is under it, perched on his head. He plays like a Fighting Vipers character and is unlocked by defeating the 'Dirty Fighters' section. His home stage is the same generic arena seen in the training mode.

Janet – Janet is from Virtua Cop 2 and has a fondness for countering. Her moves are those of Aoi Umenokoji (from Virtua Fighter 3) and can be unlocked by defeating the 'Girls' section.[5] Her arena, Virtua City, is based upon the first stage from the original Virtua Cop.

Kids Sarah – Sarah Bryant's super deformed form from Virtua Fighter Kids.[5] She is unlocked by defeating the Virtua Fighter section (though she is not fought until the Bonus section). Her stage is actually Sarah's Virtua Fighter 1 stage, now with the addition of neon letters that act as walls, spelling "MEGAMIX."

Hornet – Hornet is a car (number 41) from Daytona USA,[7] the car humorously stands on back wheels and boxes with its front. It plays like a Fighting Vipers character and can have its shell knocked off, revealing body, engine and other parts below. Its voice is sounds of an engine and many other sound effects from Daytona USA, such as screeching tires. Both of Hornet's costumes are a reference to its automatic (Red and Blue) or manual (Red and Yellow) transmissions. Its stage is based upon a racecourse from Daytona USA (the Beginner's course from the arcade game, "Three-Seven Speedway"). Once its armor is removed, it fights using Bahn's move set.[6] It is unlocked by defeating the 'Secrets' section.

Rent-A-Hero – from the Japan only game Rent a Hero for the Sega Mega Drive.[6] Rent-A-Hero plays like a Fighting Vipers character, but he has an additional handicap, battery life, measured by battery shaped red symbols above his health meter. If they all disappear, Rent-A-Hero shuts down. He is unlocked by defeating the 'Smart Guys' section. His stage is the "Chicago" stage from Virtua Fighter 2 (the stage the player gets if Jacky and Sarah face each other in a match). It is actually unlocked before Rent-A-Hero, with the original Virtua Fighter 2 music, but when Rent-A-Hero fights in the stage, the Rent-A-Hero theme music plays instead. Rent-A-Hero's stage music was changed in the North American and European release. In the Japanese version his stage music is a remake of the title screen music played in the Sega Mega Drive version of Rent-A-Hero, which is similar to that of a Japanese sentai show theme song, while the North American and European versions have an instrumental version of the song.

Siba – Siba is from a prototype of Virtua Fighter but was cut from the cast by the time of game's actual release,[6] though an icon featuring him (and mislabeled as "Akira") appears on older Virtua Fighter arcade cabinets.[citation needed] Siba is an Arab in a white and purple outfit equipped with a sword that charges with green energy. He is unlocked by defeating the 'Bosses' section. His stage is based upon Wolf's "desert" stage from Virtua Fighter 3.

URA Bahn – a super-powered version of Bahn from Fighting Vipers. He is unlocked by defeating the 'Fighting Vipers' section.[6] His stage is on the outskirts of Old Armstone town, with the buildings from regular Bahn's arena visible in the distance.

AM2 Palm Tree – the developer's emblem is available as a playable character by clocking up 84 hours of game time, then selecting the Kumachan character with the Z button.

Mr Meat (Niku) – this odd character becomes available after the game has been booted up 30 times. Mr Meat is selectable by placing the cursor on Kumachan and pressing X and opting to play "course I". 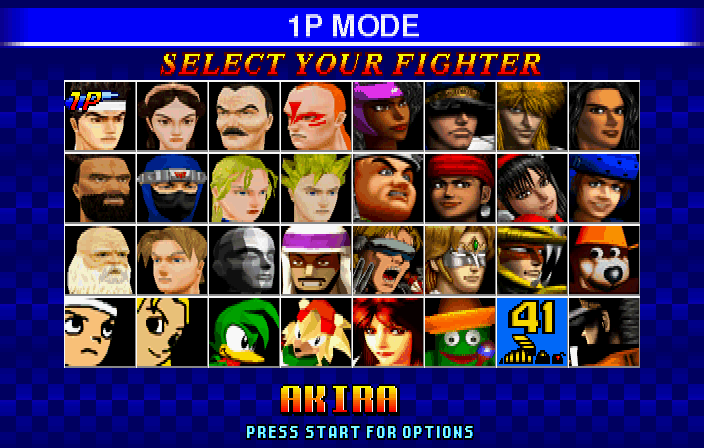 Given that 23 years have passed since the original, there is now a greater variety of Sega IPs to dip into. Keeping to the scope of the original (22 main + 12 unlockable characters), which characters would you include?
A

Sega died after the Dreamcast did, lets be honest.

Even though I was addicted to Megamix back in the day, Fighting Vipers and VF standalone were much better.

Round housing people through fences or impaling them on top of one with an uppercut was the shit.
Last edited: Jun 20, 2019

Confession: I've never played a Persona game, but it would probably be a good idea to include a couple here, given it's popularity

Acidizer said:
Sega died after the Dreamcast did, lets be honest.
Click to expand...

Sega came 2nd in the Metacritic rankings in 2018 and were third in 2017. Not bad for a "dead" company. I wouldn't even bother making this thread three or four years back, but they've been great the past couple of years, whether it's doing games themselves, or allowing other developers a go at their franchises (SoR4, Shenmue 3, Toe & Earl, Sonic Mania, Monster Boy, Panzer Dragoon, Sakura Wars, etc). Although this is more of a "just for fun" thread, a Fighters Megamix is certainly within the realms of possibility.

That's cheating! I had a bit of trouble narrowing it down to 22+12.

He better be like the Shin Akuma of this game...
A

I think the guy with the stick from Last Bronx would be good... seems like maybe he was the inspiration for the main Yakuza guy?

I'd go Smash with the roster, but keep it a technical 3D fighter. Pull in Golden Axe, Sonic The Fighters, Eternal Champions, and a healthy dozen of SEGA's roster from other titles: Shinobi, Shenmue, Yakuza, Oasis/Thor, Shining Force, etc.

I advertise for Google Stadia

Kazza said:
Sega came 2nd in the Metacritic rankings in 2018 and were third in 2017. Not bad for a "dead" company. I wouldn't even bother making this thread three or four years back, but they've been great the past couple of years, whether it's doing games themselves, or allowing other developers a go at their franchises (SoR4, Shenmue 3, Toe & Earl, Sonic Mania, Monster Boy, Panzer Dragoon, Sakura Wars, etc). Although this is more of a "just for fun" thread, a Fighters Megamix is certainly within the realms of possibility.
Click to expand...

Yeah, a technical game with human proportions. (Weapons work in Tekken, should work with Fighter Megamix 2)

I was going to include Last Bronx, but never played it, so don't know enough about the characters (have heard good things though)

Nights and Vurtua On robot

I would literally go into a Gamespot and preorder a physical copy of a game like it was 2004 if Sega announced Fighters Megamix 2.

Assuming weapons are allowed as you mentioned Golden Axe, I would suggest Vyse from Skies of Arcadia. 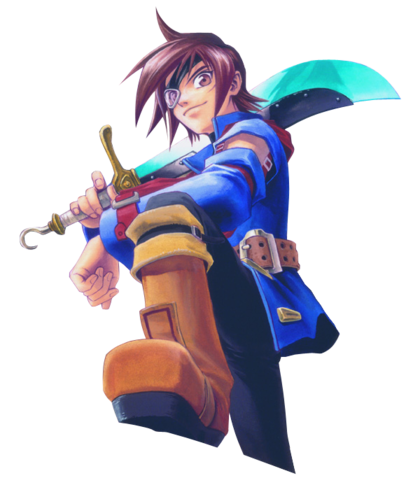 VysePSU said:
Assuming weapons are allowed as you mentioned Golden Axe, I would suggest Vyse from Skies of Arcadia.

Jannet have a gun in Fighters Megamix and Siba a sword, so no problems !
D


Hang On bike
Last edited by a moderator: Jul 2, 2019
You must log in or register to reply here.

After 50 years, Sega arcades are officially set to disappear from Japan
2

stranno replied
May 8, 2021
Sega's consoles failed mostly because they only had one blockbuster FP franchise, Sonic (2 if you include Japan)
2 3 4