Why is most gamer humor actually fucking unfunny as hell

spawn said:
I feel this video is cringe now, but when I was16 years old I thought it was funny at the time

Oh shit I remember one of my friends showing me this when I was in high school (we're probably the same age) and I became absolutely obsessed. I even bought one of the pure pwnage tshirts back in the day.

Definitely helped that we were routinely going to lan cafes. Plus the "FUCKING LAG YOU PIECE OF SHIT" was so relatable because we had terrible internet in our family home.
Last edited: Jul 26, 2022

64bitmodels said:
If it's not a shitty meme that feels like it came from 2012 making real life parallels to a video game, or a crappy webcomic from the 2000s (cough cough CTRL Alt Del cough cough penny arcade), Then it's either some 'edgy' meme that takes real life consequences and applies them to video games (ignoring the fact that they're almost always not original and are hardly funny, there are exceptions though) or stupid references. I just don't understand what's so funny about it, it eventually becomes extremely cringey after seeing it so many times.

EDIT: for people who are confused i'm referring to humor from GAMERS, not humor from games themselves. a lot of games i think are pretty funny, it's just that most gamers can't seem to make a lot of good jokes. There's some funny stuff like AVGN, Caddicarus, Scott the Woz, Nerrel and all that other stuff but then there's the really cringey shit that just screams early 2010s redditor energy, like the person who wrote it had a "gamers don't die, they respawn" T shirt. Dorkly, most gaming webcomics, and gaming memes are good examples
Click to expand...

Cause you touch yourself at night!

fart town usa said:
Suda 51 is the worst offender for me. Not a fan of his games or story skills. I just feel embarrassed for him. "Taste my big boner!!"
Click to expand...

En, I love that game. It knows it’s stupid, crass and juvenile, and this makes its humour genuine. The Big Boner scene is so far from the pretentious attempts at humour of so many other games, it just got me real good. The secret of that game’s humour is in the delivery. The VA is simply stellar.

Doesn’t help that humour in games is often self-celebrating. So many games try to be funny with winks and nudges at other famous games. As good as Super Meat Boy is, its neverending nods at 8-bit classics felt very tacky to me.

Just old fashion in my view.
Such as the Millennium bug, still someone remembers it. Yes, it's me.
We like what we want to like. It's none of your business.
What's wrong with you?

The only game I can think of that had me actually laughing out loud with how well executed some the humour was done was the original Disgaea. The satire really is on point in that game, from its in game dialogue/voice acting to its completely over the top special moves. Unfortunately, the other entries in the series, at least what I've played of them, the jokes didn't really land for me. Different bunch of writers I guess. D5 being so bad I couldn't make it past more than about 10 mins in before reaching for the skip button, really was unbearably bad.

omg so funny when rick and morty 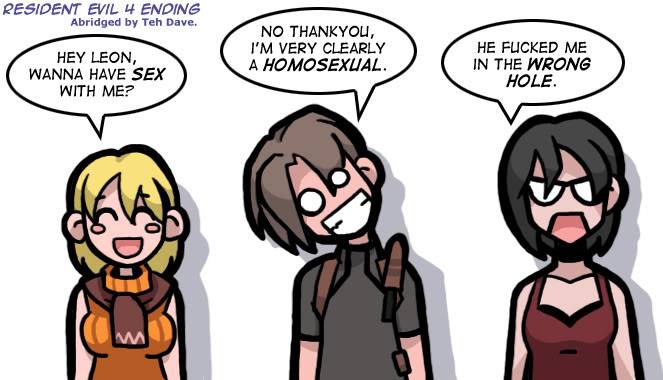 Me and my cringey fucking friends in highschool used to say this shit unironically.

Conker's Bad Fur Day (not sure about the writers for this one, just judging by how politically incorrect it is)
Click to expand...

Politically incorrect isn't a conservative thing...especially not at the time conkers came out. Portal 2...huh?

It is these days

hybrid_birth said:
Why does everyone use tp when a bidet provides a better ass clean without itching.
Click to expand...

You don't wash your car with just a hose

Frank Horrigan said:
You don't wash your car with just a hose
Click to expand...

That’s what your hands are for, duh.
You must log in or register to reply here.

MonkeyClaw36 replied
May 12, 2022
How Out Run changed video games forever

Old Retro replied
Sep 19, 2021
How something that could be just a brief fad turns into a global phenomenon? And can that status be maintained?
Opinion