76% Jumanji: Welcome to the Jungle 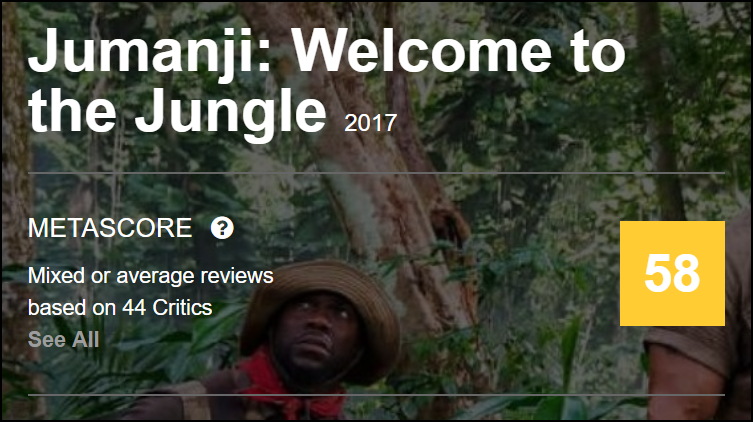 That number means that “Black Panther,” starring Chadwick Boseman and directed by Ryan Coogler, has doubled its original tracking in less than a month. The film, which carries an estimated $200 million production cost, had been tracking to bring in between an impressive $100 and $120 million when first estimates emerged on Jan. 25. Since then, “Black Panther” has become a must-see movie for many moviegoers, underlined when Thursday previews brought in $25.2 million, the largest Thursday night preview gross for a February opener and the second-largest preview gross for a Marvel film.

The film’s estimated three-day gross of $192 million is the highest debut ever for a February film and the fifth highest of all time. Combined with an estimated international debut of $169 million from 69% of the international market, the estimated global debut stands at $361 million through Sunday.

“Black Panther” has demolished the record for the largest Presidents Day weekend, blowing past “Deadpool’s” 2016 mark of $152 million. Overall North American moviegoing for the four-day period should hit $300 million — far above the $278 million mark in 2016, according to comScore.

“This is proof that the big screen experience may arguably be the most powerful platform of change in our society,” said Paul Dergarabedian,” senior media analyst with comScore. “The emotional, communal, immersive and bigger than life theatrical experience has an impact that virtually no other medium can match.”

It’s received an A+ CinemaScore, the only Marvel film to have done so besides 2012’s “The Avengers.” Comscore’s PostTrak survey of the audience showed outstanding numbers with 77% rating “Black Panther” as “excellent” and another 18% as “very good.”

The audience skewed slightly more male, with 55% male moviegoers compared to 45% female according. Adults made up 73% of the audience, with families another 17% and 10% teens. According to Comscore, the audience was 37% African American, 35% Caucasian and 18% Hispanic.

The AMC chain reported Sunday that 80 AMC locations, more than 10% of its U.S. circuit, have set an admissions-revenue record for a single title on opening weekend. Imax locations took in $23 million for the fourth-highest total in the format of all time.

Sony’s second weekend of “Peter Rabbit” should bring in $22.5 million from 3,275 domestic locations for the four-day weekend, yielding an 11-day domestic total of $53 million. The film stars the voice of James Corden as the titular rabbit, along with Margot Robbie, Elizabeth Debicki, and Daisy Ridley as Peter’s sisters. Domhnall Gleeson stars as the heir to Mr. McGregor’s property, with Rose Byrne as the kindly neighbor Bea.

Sony’s ninth weekend of its durable action-comedy “Jumanji: Welcome to Jungle” finished fourth with $10 million at 2,800 venues. The 62-day domestic total will hit almost $380 million, just behind 2005’s “Star Wars: Episode III — Revenge of the Sith” for 32nd spot on the all-time list.

Clint Eastwood’s second weekend of the thriller “The 15:17 to Paris” is set to take fifth, with $9.1 million from 3,042 locations for Warner Bros. The movie, starring the three men who stopped an attempted 2015 terrorist attack on a European train, is projected to have grossed nearly $27 million domestically in 11 days.

Fox’s ninth weekend of “The Greatest Showman” continued to show remarkable traction in sixth with a projected $6.3 million at 1,936 locations, which will lift the 62-day total to $155 million for the Hugh Jackman musical.

Nick Park’s “Early Man” opened softly this weekend in the U.S. in the seventh slot with $4.2 million million from 2,494 North American locations. The British film, which is being distributed in the United States via Lionsgate, utilizes the voice talents of Tom Hiddleston, Timothy Spall, Eddie Redmayne, and Maisie Williams.
Click to expand... 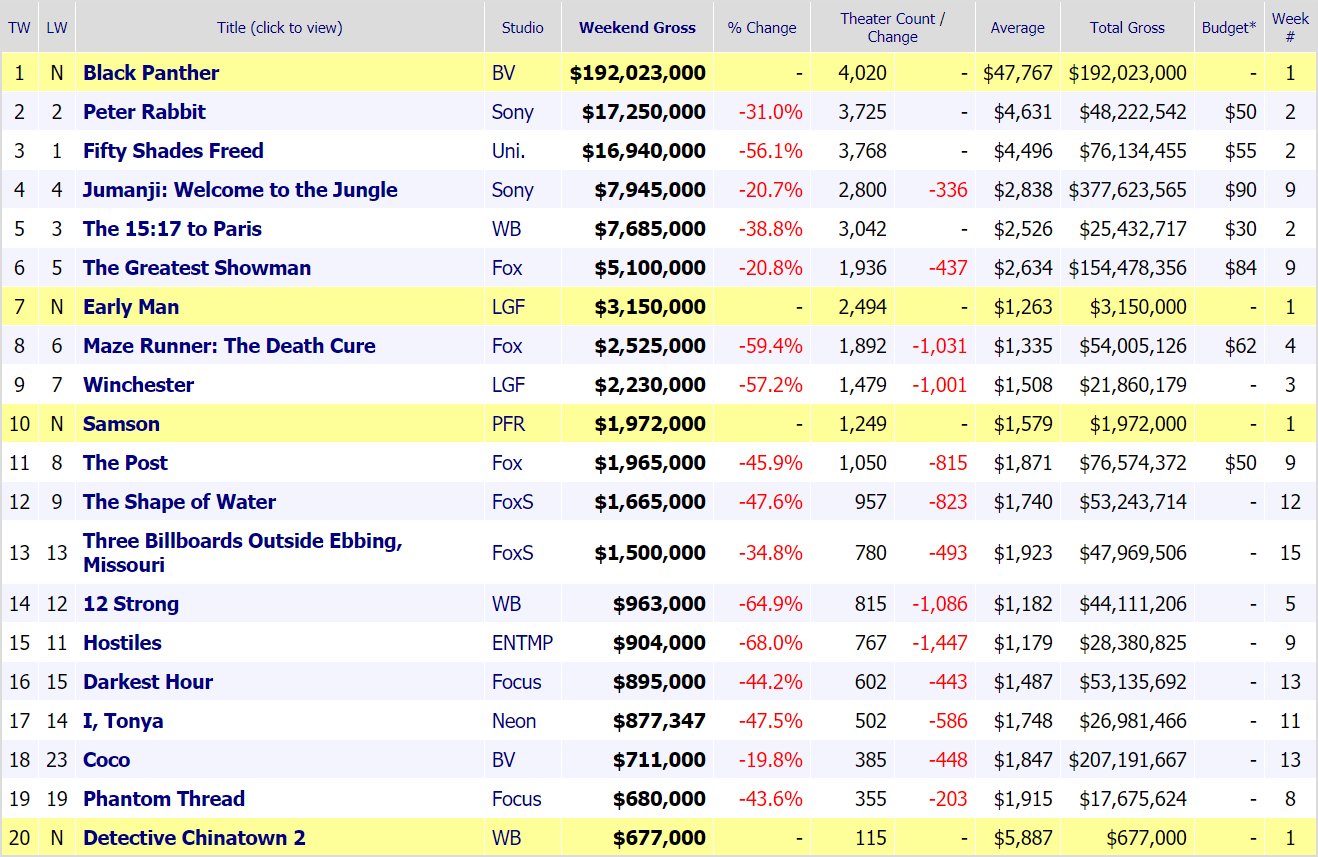 That's pretty massive tbh. I expecting around 160m but the high ratings and word of mouth seem to have given BP a huge boost.
H

I'm a Marvel bitch so i'll be seeing BP at some point, like next week or something.

MONDAY AM UPDATE: Disney has revised their three and four-day estimates for Black Panther and as expected the grosses continue to rise with the film now delivering an estimated $201.7 million over the three-day and is expected to surpass $235 million for the four-day weekend.

MONDAY AM UPDATE: Disney has revised their three and four-day estimates for Black Panther and as expected the grosses continue to rise with the film now delivering an estimated $201.7 million over the three-day and is expected to surpass $235 million for the four-day weekend.

Man this is amazing!!!

That's a crazy number. The movie was great, though, so it's well-deserved.

Is the first post the official numbers? I know it got adjusted quite a few times throughout sunday. The box office is massive. I intend to see it, but thought the trailer was lackluster. I'll probably see it at some point soon.

Where did Star Wars go when Jumanji is still there lol.

WaterAstro said:
Where did Star Wars go when Jumanji is still there lol.
Click to expand...

You made me curious:

exact opposite of BP, I guess.

Impressive numbers.
You must log in or register to reply here.