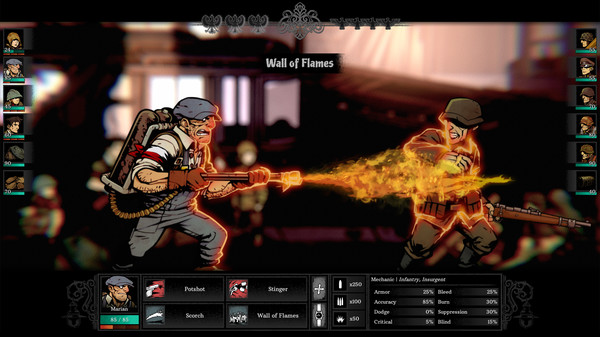 Publisher Gaming Company and Regalia: Of Men and Monarchs developer Pixelated Milk have announced Warsaw, a World War II-set turn-based tactical RPG due out for PlayStation 4, Switch, and PC in Q3 2019.
Here is an overview of the game, via its Steam page:


Own the City
Use everything at your disposal to help a team of accidental heroes survive the onslaught in their home city and overcome tremendous odds stacked against them.
Embarking on missions of varying difficulty take on the Nazi oppressors from the confines of your unit’s hideout. Draft heroes from every field of life – young and old, men and women, soldiers and civilians and stand your ground against the enemy that took away their homes and families.​
Main Features

This is Your Fight

Watch the announcement trailer below. View a set of screenshots at the gallery. Visit the official website here.

Can i play with germans?

There’s a point where imitation goes beyond flattery and heads into creatively bankrupt. I hope the game is good, or else it will earn the nickname “The Darkest Dung”
L

Heimdall_Xtreme said:
Can i play with germans?
Click to expand...

Nah, just looks to be the same old, same old.

WARSAW is a challenging, turn-based tactical RPG taking place in the ruins of a besieged city during the closing months of WWII, coming to PlayStation 4 on September 29th.

Assemble a team of survivors and freedom fighters, equip them with salvaged arms and face difficult choices while leading them in a desperate fight for freedom on the historic streets of occupied Warsaw.
Click to expand...

Heimdall_Xtreme said:
Can i play with germans?
Click to expand...

You're playing to lose?
You must log in or register to reply here.