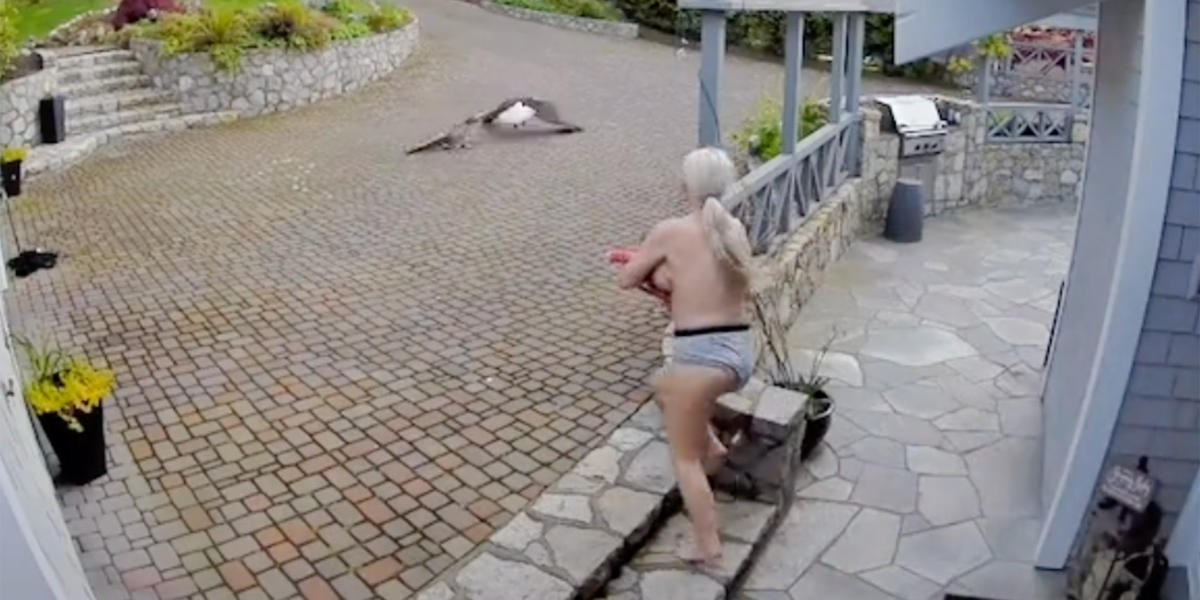 Breastfeeding mom fights off bald eagle to save pet goose

As Cait Oakley was breastfeeding daughter Willow, she heard her pet goose, Frankie, squawking at the front of the house. Oakley could tell there was something wrong, so she peered outside and saw that an eagle was circling her beloved pet. She rushed outside half-naked, with Willow still at her breast, and the drama heightened as the bird of prey grabbed Frankie, who furiously flapped her wings to try to break free.

“I went to the front door with Willow latched on me, just thinking, ‘I’ll take a peek out the window’ and that’s when in that split second the eagle came down and it was at my front door. So I threw the door open. There was nowhere to put Willow down at that point,” Oakley, 29, of North Saanich, British Columbia, told TODAY Parents. “It was just a split second reaction. I chased off (birds of) prey many many times — usually not with a baby.”

Wearing only her underwear and clutching a feeding 4-month old baby, the mom chased after the eagle to save her goose. It worked — the eagle dropped Frankie. Her doorbell camera caught the encounter, which her husband shared on social media. (Frankie the goose has a TikTok account.) It soon went viral. Even though loads of people have seen the mom of three — Willow, now 5-months-old, Rome, 2, and Ryder, 8 — topless and in her underwear, she’s not embarrassed. She was simply feeding her child and taking care of her pet. 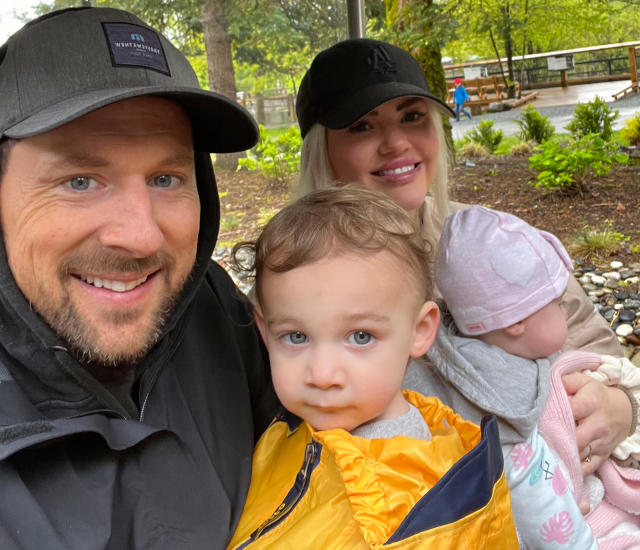 While many have applauded the mom’s superhero feat, Oakley said it’s just what moms do.

“I don’t even really think about it,” Oakley said. "It feels like an accomplishment, I suppose, but for me this was a day in the life."

Oakley and her family live on an acre of land and keep chickens, ducks and geese. The chickens attract “an abundance of predators” so she has had to fight off different animals trying to take them. The week of the eagle attack on video, the family lost three chickens to some sort of bird of prey. They’ve had Frankie for about a year; geese often protect flocks of chickens because they can be aggressive. But Frankie is “calm” and enjoys her human companions.

“She’s part of our family. Like she just came to check out what I was doing in the garden,” Oakley said. “She’s always around us and the kids.” 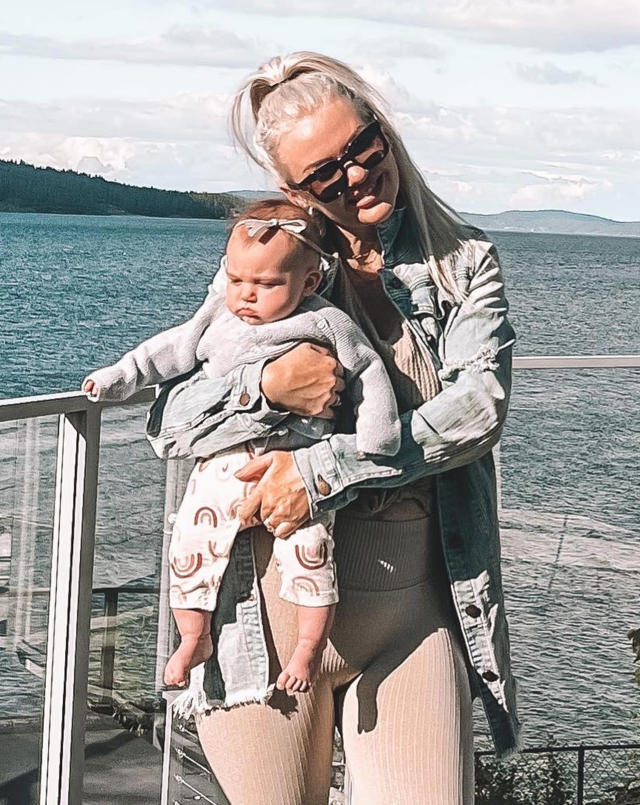 Cait Oakley's family has chickens, which attack predators. She's gained a lot of experiencing scaring off predators trying to snack on her brood. (Courtesy Caitlin Oakley)

Oakley's heroism was even featured on "Late Night With Seth Meyers," in a segment aptly named "The Kind Of Story We Need Right Now."

Oakley said that any breastfeeding mom knows what it’s like juggling a feeding infant while having to care for the family. This time, it just involved warding off predators.

“Breastfeeding itself is a full time job. You are constantly having a baby on you and if you have other kids, you’re juggling them,” she said. “This was second nature to me.”

“Breastfeeding itself is a full time job…you’re juggling them,” she said.

I think I saw a video like this on efukt once 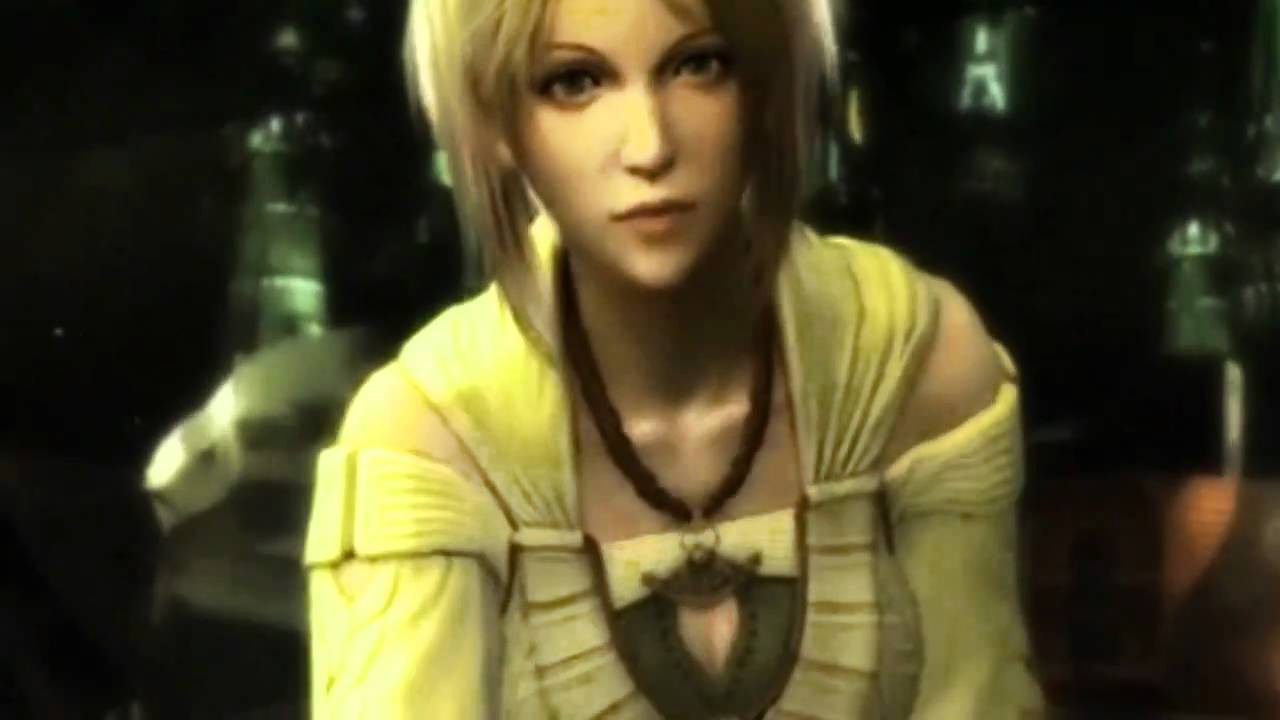 Goose will be ready next time. This is like the text version of one of those "it gets worse the more you look at it," pictures.