Zack Snyder's Justice League lives up to its title with a sprawling cut that expands to fit the director's vision, and should satisfy the fans who willed it into existence​

Variety
"[This] has to be one of the most visually spellbinding comic-book movies ever made.
The clashing battles never give you that weary, here’s-some-more-CGI feeling, because they’ve been staged with a supreme conviction that’s more 'Seven Samurai' than super invincible."

The Hollywood Reporter
"[After] the Man of Steel comes back to life and our heroes get their twilight glory pose, Snyder tacks on an exasperating epilogue — offering a window into alternate realities, with even deadlier conflicts between the iconic characters who're supposed to be super-friends.
No thanks, guys. This was more than enough."

IGN
"With a mature approach to its superhero drama, better-realized antagonists, and improved action, Snyder’s version of Justice League saves the movie from the dustbin of history."

ComicBook.com
"Yes, Zack Snyder’s Justice League has a handful of flaws," it reads, "but they are largely outweighed by the sense of grandiosity and earnest spectacle on display -- one that proves just what ensemble superhero movies can still be capable of."

ComicBookMovie
"Zack Snyder’s Justice League is the superhero movie event of the decade; epic and exciting, it lives up to the hype, and features a standout performance from Ray Fisher as Cyborg along with must-see teases for a sequel we can only hope becomes a reality."

JoBlo.com
"The Joss Whedon version of Justice League has barely any footage in common with this, beyond a few heavily modified sequences.
This is a new movie and should be viewed as such. Hopefully, it’ll lead to more Snyder in the DCEU. It may seem unlikely but the mere existence of this movie proves nothing is off the table."

Uproxx
"[My] mindset on this movie has changed from “a disaster” to “a competently made, interesting misfire."
And for people, like me, who aren’t totally on board with Snyder’s grand vision for these films, well maybe, in Snyder’s mind, that’s a win."

ThePlaylist
"While it feels like cultural factions have been fighting over “Zack Snyder’s Justice League” for years, the winners ultimately will be the fans. ‘ZSJL’ is a fan cut as much as it is a director’s cut, with all the indulgence that the notion applies"

RogerEbert
"It's so bombastic that it makes "Batman v. Superman: Dawn of Justice" seem modest. It will mainly please the people who clamored for it. Even fans of the genre might consider it a bit much. It owes as much to rock concerts, video games, and multimedia installations as it does to commercial narrative filmmaking.
It's maddening. It's monumental. It's art."

NYTimes
"Predictably, the supersized run time allows the narrative room to stretch, for better or for worse."

DenOfGeek
"For the most devoted disciples, moments like Justice League’s new, inexplicable epilogue will be treated like scripture, which is fine. To everyone else though, know that Zack Snyder’s Justice League is a cold and it’s a very broken hallelujah."

In ZACK SNYDER'S JUSTICE LEAGUE, determined to ensure Superman's (Henry Cavill) ultimate sacrifice was not in vain, Bruce Wayne (Ben Affleck) aligns forces with Diana Prince (Gal Gadot) with plans to recruit a team of metahumans to protect the world from an approaching threat of catastrophic...

Variety is encouraging. Comicbookmovie going in hard with "movie event of the decade" in 2021...Or clever covid joke.
I

im confused, are we seeing the whole 4 hours pr is it split?

isual said:
im confused, are we seeing the whole 4 hours pr is it split?
Click to expand...

Full 4h movie with an intermission in the middle.

Sounds great to me.

I'm so glad this turned out great for the fella, I like Zack's flicks, his Dawn remake remains one of the best horror films of all time imo and his style of filmmaking makes a welcome change to the usual shit by numbers shite.

Sounds like the finale is amazing which is great because I thought the final fight with Stephenwolf was really lame. they punch him like three times and the battle is over.

I also gotta admit that this turned out to be this good. I thought the critics were gonna trash it again just like they did BvS and Man of Steel, but they liked this?

Not that it matters what they think. I watch snyder movies to see fantastic visuals and great score. Cant believe this thing actually happened.

I have some HBO + crave bundle thing. Is that good enough or is HBO Max something on its own?

And before someone springs the Whataboutism "all fandoms are toxic", everyone knows this is still a problem with this movie, even people posting their reviews today are begging to not be killed for having a negative opinion: 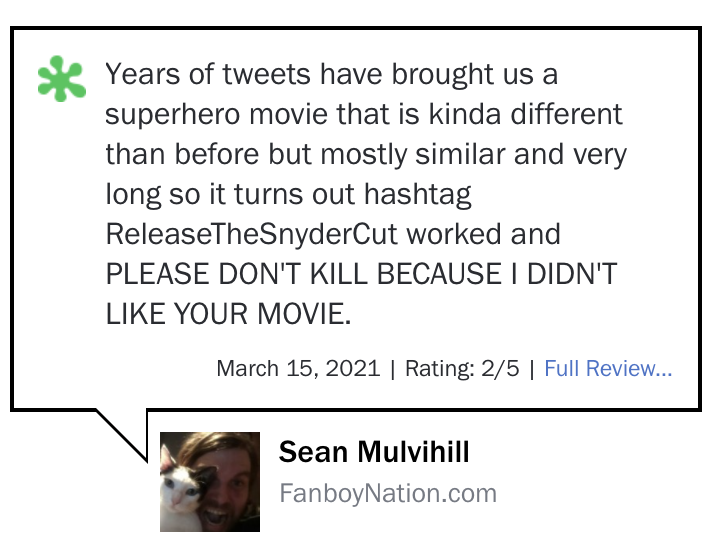 And before someone springs the Whataboutism "all fandoms are toxic", everyone knows this is still a problem with this movie, even people posting their reviews today are begging to not be killed for having a negative opinion:

As you talk about toxicity:

KyoShiRo330 said:
As you talk about toxicity:

You might want to talk to the head of HBO Max before linking the YouTube channel that organizes much of the harassment people have suffered for the last three years.

In a new interview, Robert Greenblatt explained what’s ahead for the Justice League redux—and how much it could cost.

“It isn’t as easy as going into the vault and there’s a Snyder Cut sitting in there to put out,” Greenblatt said in the interview. “It does not exist. Zack is actually building it, and it’s complex, including—and I don’t want to get into too much detail that we haven’t already talked about yet—new FX shots. It’s a radical rethinking of that movie and it’s complicated and wildly expensive.”


In the aftermath of the news last week, sources told The Hollywood Reporter the Snyder cut could cost between $20 and $30 million to complete. When confronted with that pricetag, Greenblatt suggested $30 million might be more of a floor.


“I’ll just say I wish it was just $30 million and stop there,” he said in the interview. “It’s an enormous undertaking and very complex.”
Click to expand...

I guess by this logic the head of HBO Max deserves to die for being "toxic" and saying the cut didn't exist in a vault somewhere and they had to spend millions to create it.
Last edited: Mar 15, 2021

ManaByte said:
You might want to talk to the head of HBO Max before linking the YouTube channel that organizes much of the harassment people have suffered for the last three years.

In a new interview, Robert Greenblatt explained what’s ahead for the Justice League redux—and how much it could cost.

Oh I'm not saying it doesn't exist, but the world isn't all black or white.
Now please keep those troll post to your OT, or go pm if you really want to argue.
I'm not gonna respond to you here anymore because it just time waisted.

Can't wait for this. Been a long haul.
I'll admit I'm a little salty that people got early viewings of this due to many of us fighting for this movie for years while so many out there were just saying it'd never happen and didn't exist.

I'll admit, I haven't been keeping up on this whole thing. Looks like it drops in 3 days on HBOMax, tho? If so, may watch it this weekend.

I am so done talking about this movie.

My body is ready to watch Darksied !

Glad it has a positive vibe. Bring it on.

So it does seem to be a completely different film after all?

sol_bad said:
So it does seem to be a completely different film after all?
Click to expand...

Yes it is completely different. You can have two filmmakers adapting the same story, they won't have the same outcome.
The best thing is to forge your own opinion though.

MDSLKTR said:
Full 4h movie with an intermission in the middle.
Click to expand...

Is that when we clap?

I like Zac. He understands action which until Marvel was a huge failing of superhero films. I like his use of filters and music, I think he understands visuals and design far better than most. The main knock on him is kind of grandiosity and inconsistent storytelling which is a totally fair critique.

My nipples got hard reading this. I am so fuckin hyped.

Sounds promising so far. Even the negative reviews don't seem to cite anything particularly egregious beyond the length and Snyder doing Snyder, which I'm well prepared for.
E

I won’t believe this till I see it for myself...now my expectation has been raised for better or worse!
Last edited: Mar 16, 2021

G-Bus said:
I have some HBO + crave bundle thing. Is that good enough or is HBO Max something on its own?
Click to expand...

Not gonna lie, I lost a lot of interest in this when I saw the aspect ratio, it went from 0-sec to 0-weekish on my watch list

acm2000 said:
Not gonna lie, I lost a lot of interest in this when I saw the aspect ratio, it went from 0-sec to 0-weekish on my watch list
Click to expand...

If this is actually a good Justice League film ... hype. I loved Man of Steel and thought the Ultimate Cut of BvS wasn't bad.

If it delivers I'll say give Zack back the keys and let him make his sequels. Then when all's done, reboot it all and make a more comic-accurate shared universe à la Marvel.

Though at this point I'm still prepared for this post to age poorly. Either way, I'm there on Friday.

Svengoolie007 said:
My nipples got hard reading this. I am so fuckin hyped.
Click to expand...

Some reviews by non-Snyder, non-DC folks:

I am sooooooo glad this isn't a catastrophy and is turning out to be an actual redemption for Snyder, Affleck , Cavill and all others.

Surprised and pleased that Snyder has made a movie that seems to be a lot better than the poor quality of Batman V Superman, and the abortion of Josstice League.
Last edited: Mar 16, 2021

The movie is still at 75/76%.
Some people are preparing their crow ?

pesaddict said:
Why what's the ratio ???
Click to expand...

I'm excited for this. I thought Affleck made a great Batman. He made an even better Bruce Wayne. Imo.

God damn it I can't wait for Thursday. Haters must be in shambles right now.

Umbasaborne said:
Seeing angry marvel fan boys get pissy because the rt is higher than they want it to be is giving me life
Click to expand...

Doom85 replied
Aug 6, 2022
Variety - Will Zack Snyder Be Invited to Make a ‘Justice League’ Sequel? The Answer Is a Test of Whether Hollywood Still Works