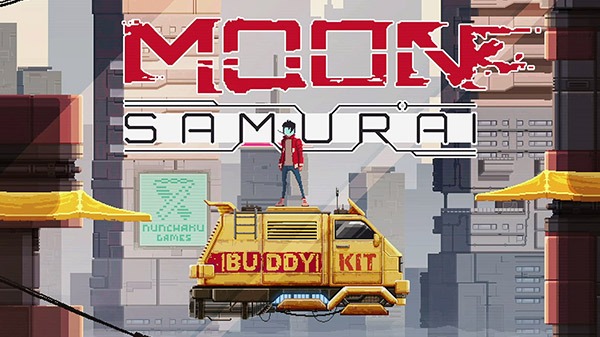 Nunchaku Games told Gematsu that while it currently has no plans for PlayStation and Xbox versions, they are being considered.

Here is an overview of the game, via Nunchaku Games:

About
Moon Samurai is a 2D pixel graphics action adventure game set in cyberpunk universe.
You will play as a young futuristic samurai named Buddy. Fight your way through a dangerous science-fiction world, unravel its mysteries, and escape all the traps. Tornadic scuffles against a broad range of enemies will go hand-in-hand with exciting parkour-style jumping over rooftops, balconies, and ladders.
The game draws its inspiration from old-school martial arts movies, cyberpunk culture, and 80s-to-90s retro-games: Prince of Persia, Double Dragon, Comix Zone, Oni, Battletoads, Karateka, and others.
Story
The year is 2070. RAM City Megapolis, Moon. The main character, Buddy, escapes from prison. On his mission to break through prison guards and security systems, he is assisted by the Danao_X artificial intelligence, which is responsible for the control of nearly all processes in RAM City.
Buddy and Danao have common foes—six samurai who have betrayed Danao and almost gained full control over the city. As for Buddy, he has been put behind bars, because, being a samurai himself, he didn’t support their plan.
Buddy and Danao have exactly one day to take revenge on the samurai and stop them from destroying the recently flourishing city. The young and hotheaded Buddy is seeking justice and revenge. Danao is a practical and emotionless machine devoid of human moral concepts. They have a common goal, but each also has their own ulterior motives. They will have to learn to trust each other, for only together might they be able to defeat their enemies.
Key Features

I wonder if those particular fights were scripted. It looks visually great but I'd like to see more gameplay. Also 90% of the trailer had me saying, "He's a samurai, but where's his sword?" Then the reveal happened, pretty cool.

I'll keep an eye on it.
You must log in or register to reply here.