“The Predator” was able to fend off “The Nun” at the domestic box office.

Shane Black’s “The Predator” launched with a tepid $24 million from 4,037 North American locations. That was easily enough to top the weekend box office, but not enough to land a franchise-best debut. That distinction still belongs to 2010’s “Predator” with $24.7 million (not including the two “Alien vs. Predator” crossover films). Overseas, “The Predator” earned $30.7 million for a global start of $54.7 million. It will need to generate big business internationally to justify its $88 million production budget.

Warner Bros. “The Nun” dropped to second place, picking up $18 million in its second weekend for a domestic tally of $85 million. It continues to find success abroad, amassing another $33 million this weekend taking its global total to $228 million. Meanwhile, Lionsgate’s “A Simple Favor” debuted at No. 3 with $16 million on 3,102 screens. Another new offering, Matthew McConaughey’s “White Boy Rick,” along with “Crazy Rich Asians” rounded out the top five.

Though “The Predator” opened at the lower end of estimates, it doesn’t seem surrounding controversy tainted the sci-fi film. Prior to its premiere, “The Predator” drew ire after 20th Century Fox announced it deleted a scene featuring registered sex offender Steven Wilder Striegel. The studio said it was “not aware” of Striegel’s background when he was hired. Black has since apologized for casting Striegel, who is a friend of his.

Chris Aronson, head of domestic distribution at Fox, said the scandal didn’t influence weekend numbers. “I don’t think it dissuaded anyone who wasn’t predestined to go. I think it had minimal, if any, impact,” he said.

Anna Kendrick, Blake Lively, and Henry Golding star in “A Simple Favor,” which fared well with females and adults. Women accounted for 67% of audiences, while 86% were 25 or older. Paul Feig,known for his work on “Freaks and Geeks” and “Bridesmaids,” directed the neo-noir mystery drama.

The weekend’s final new offering was Pure Flix’s “Unbroken: Path to Redemption.” It just barely cracked the top 10 with $2.2 million from 1,620 locations. The movie is a “spiritual” sequel to Angenlia Jolie’s 2014 film “Unbroken,” though neither Jolie nor Universal Pictures are involved in the latest installment.

With fall officially underway, the box office is up 8.9% from the previous year, according to comScore. The top grossing movie of 2018 is still “Black Panther” with $700 million in North America.
Click to expand... 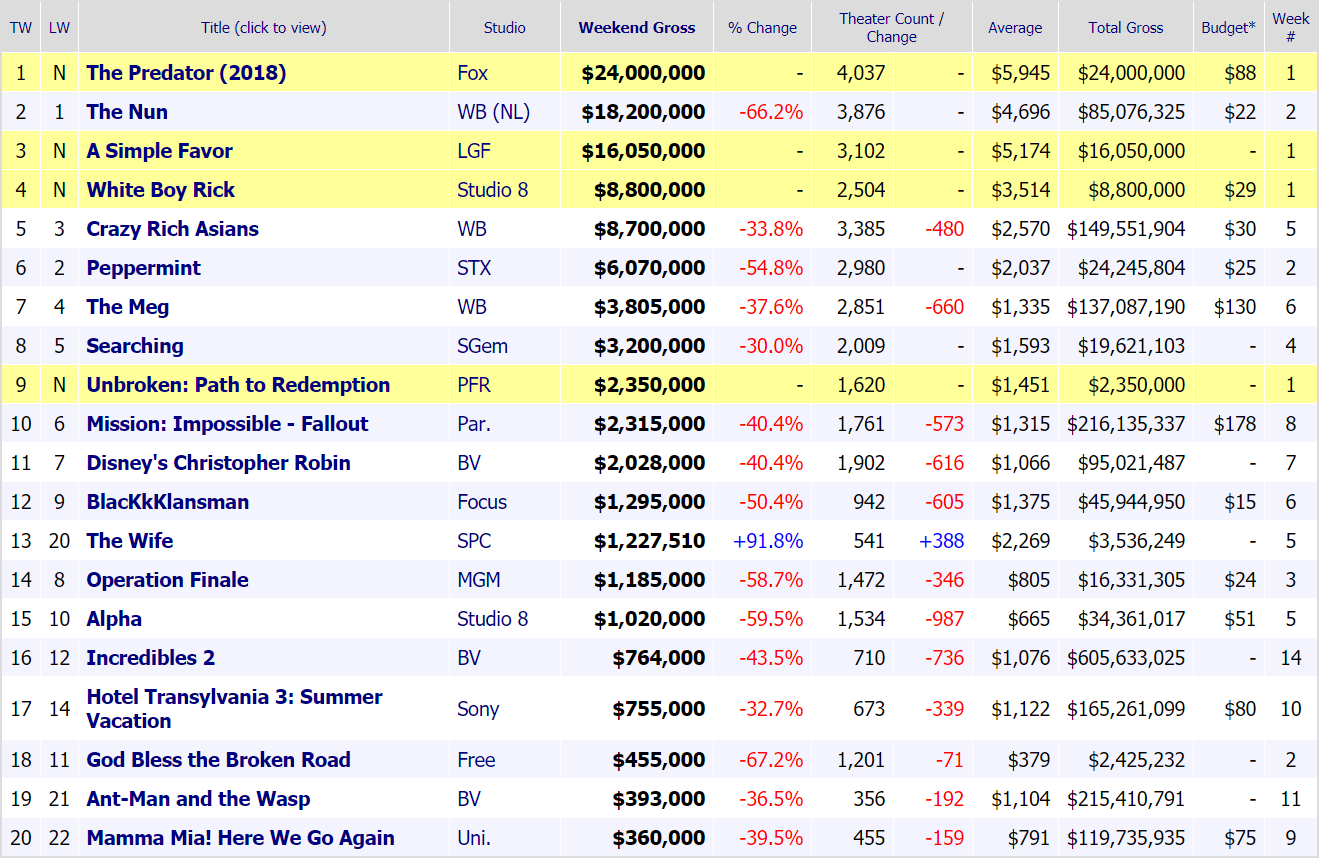 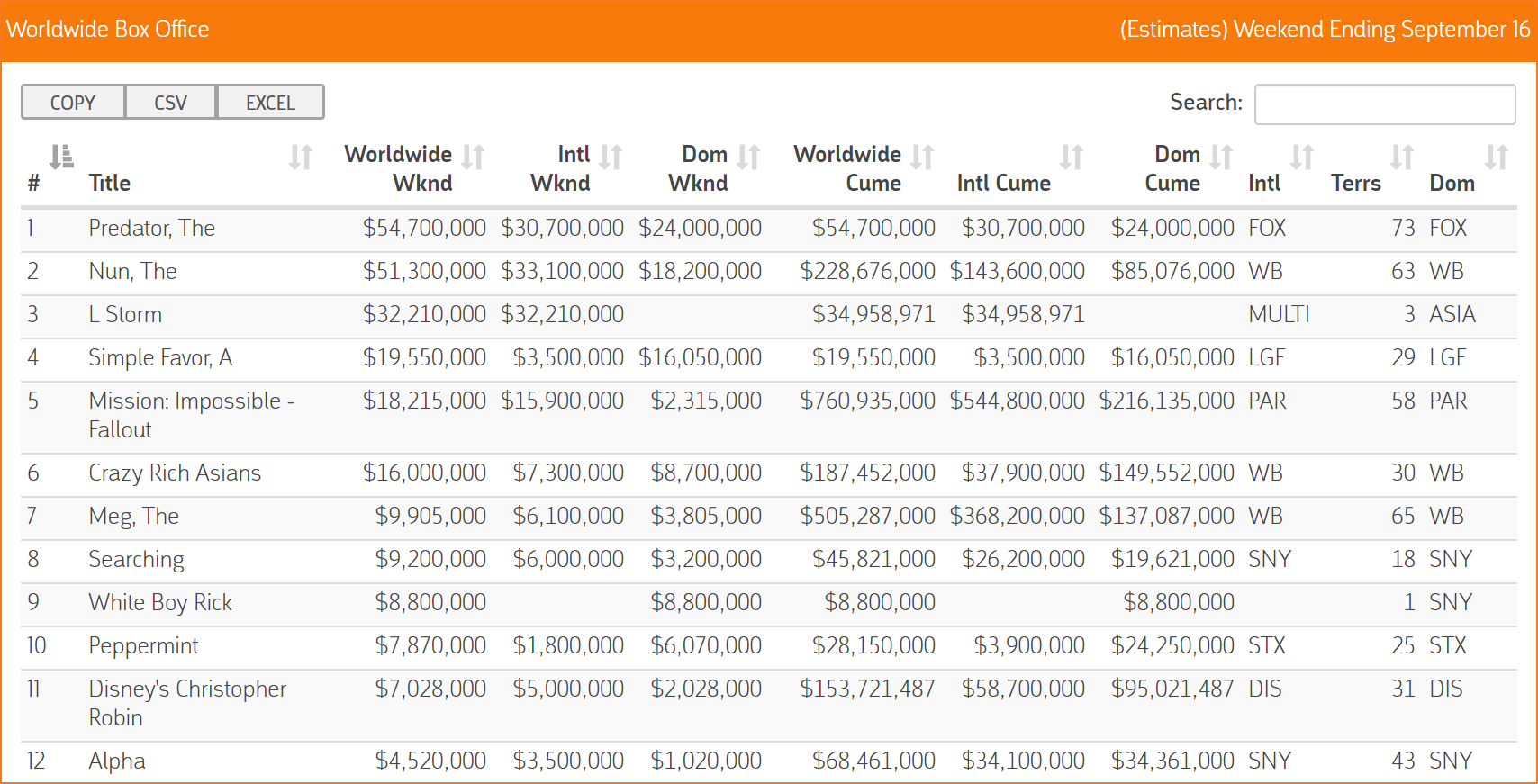 24 million for The Predator seems low as hell. The trailers didn’t do much for me

PhoReal said:
24 million for The Predator seems low as hell. The trailers didn’t do much for me
Click to expand...

Yeah, it's a flop unless something crazy happens. Movie deserved this result too.
X

kunonabi said:
Yeah, it's a flop unless something crazy happens. Movie deserved this result too.
Click to expand...

Anyone that was expecting a massive $100 million opening was not being realistic.

The "Predator" movies have never been huge blockbusters.

The Predator was pretty fun. My only issues were I felt a few added scenes where the characters could develop a bit more as once the action starts the film rarely slows down, it's either action scenes or scenes of the characters planning their next move, and also I felt the epilogue was unnecessary and they should have ended on the previous scene. The cast is pretty solid and play off each other well and not surprisingly Keegan-Michael Key is the highlight.

Most importantly, it feels like a proper Predator film. I enjoyed Predators but I felt it didn't have enough of some of that silliness and over-the-top-ness that was in the first two films (aside from the yakuza guy's awesome sword duel with one of the Predators). This film did have those elements and felt more like what I would a modern Predator film to feel like. I admit the style of directing threw me off (the characters do often talk fast and practically almost over each other) but it started to grow on me as I realized it would make sense for these characters to interact this way (talking about the heroes aside from Boyd Holbrook and Olivia Munn as the rest of them are all soldiers who were about to be sent to a mental institution). I also appreciate the film doesn't hold back at all on the profanity, as this particular franchise shouldn't hold back in that department given its roots.

I'm a little curious with Searching, but nothing else has me tempted to watch

Peppermint was fun! Why the low score!?

Congrats to MI6 on becoming the highest grossing MI both domestic & international, 760m with a chance to hit 800m if they really want it. Fantastic movie, well deserved!

The Meg crossed 500m worldwide. Definitely the surprise BO hit of the summer w/ a sequel almost guaranteed at this point
S

Jesus! The Nun already grossed 10 times its budget. New Line Cinema and Blumhouse really have a winning formula with this low budget horror movies.
You must log in or register to reply here.