strange headache said:
So is was COVID's fault that you decided to remove basic functions the scoreboard?

Of course it is a scapegoat. "Buuuut working from home is HARD", fuck off mate. You were ON RECORD in early 2021 saying that 2042 was "ahead of schedule" and coming along nicely. You cancelled the singleplayer campaign so all teams could focus exclusively on the multiplayer aspect. You have developers posting retarded twitter posts mere weeks before launch that "everything is going to be great. Trust us fam" and other such nonsense.

Blaming Covid is the coward's way out. Typical Andrew Wilson, typical EA. You fucked up spectacularly but instead of owning up you blame Covid. What a piss poor manager. Absolutely terrible. Take some responsibility, you fucking hack.
Last edited: Feb 2, 2022

It didn't meet my expectations and I set them extremely low.

Remember when they said ''Don't like it, don't buy it''?
Well, that's what i did. Last good BF was BF4 and i'm never buying another game BF game.
Guess they were focusing on the roadmap since the game doesn't have a campaign.
Let DICE and EA die.

They knew what they were doing. Just thought they could get away with it.

The problem has nothing to do with Covid. The maps are garbage and they destroyed the class system. They also need to go back to 64 players.

I can't imagine a CEO admitting to screwing up, big time.
It's always someone or something else's fault. Sometimes they will blame pirates, or consumer expectations, or game reviews, or the economy, etc.
Covid has become a good thing to discard your own blame unto.

I laugh at those who played the beta and still played the game, for someone whose been playing bf betas since bad company 2, the beta is pretty much the final game with afew tweaks and minor bugs fixed but not only was bf2042 beta one of the worst ones with bugs and stuff but the game played nothing like bf at all, especially the classes, cant say whose to blame, EA or DICE but this game needs to be scrapped because we aint going to get another battlefield in a long time and i cant accept bf v being the last bf game either lmao 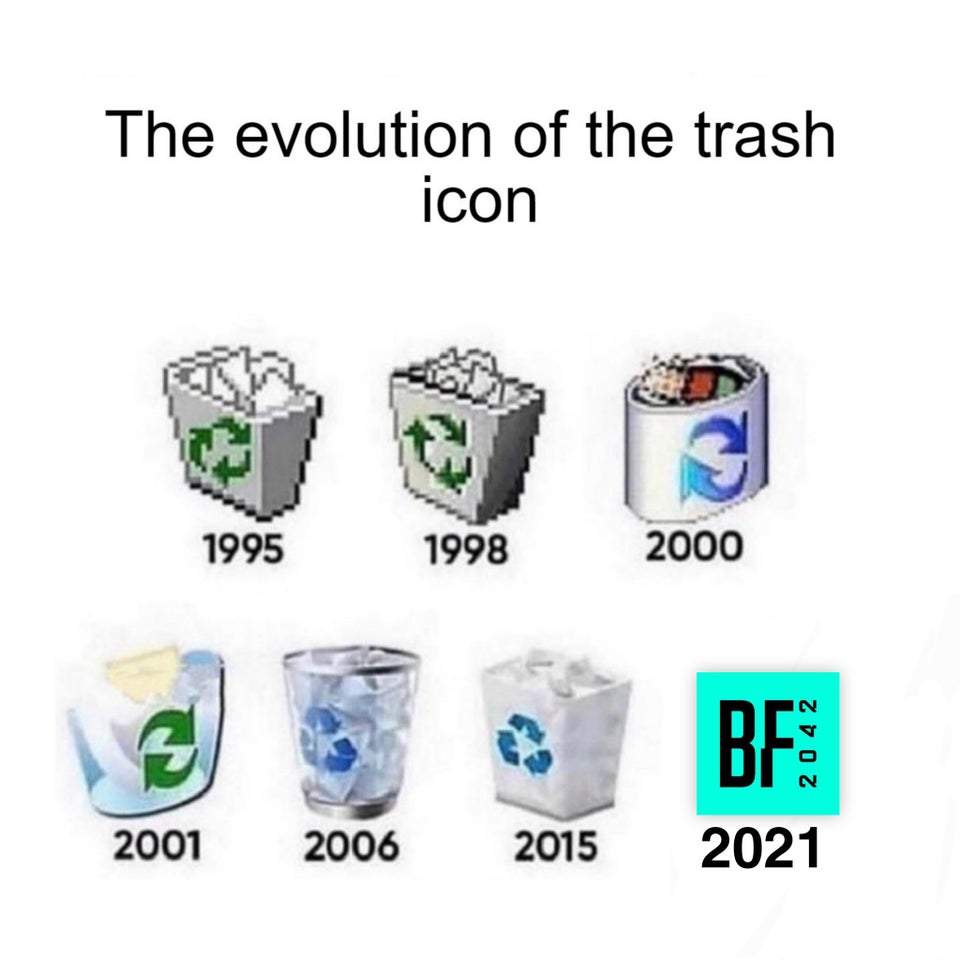 I want a campaign like in the “Bad Company” days

Sounds like they thought they could release a pile of shit with the Battlefield name and expected it to do well. Glad they are learning a lesson. But that just goes to show that you should never preorder a game these days.

BlackM1st said:
I wonder who's bright idea it was to put Windows logo into the bin in 2000 release lmao
Click to expand...

Holly shit never noticed that before.

Inviusx said:
they need to make is the removal of heroes
Click to expand...

Well...not really, you can do this without that. Make them optional, have everyone animated to have those same abilities if they select the class (as that is what BFV did, like you can be medic and have any avatar) It can be done while keeping the characters, keeping the abilities, simply locking those abilities to a class.

But talking about it earlier to a friend, its much more difficult to even do as you'd need to re-animate all characters, even the default ones in the game in Portal to have a wingsuit and do other abilities and stuff. So it can be done where they are just avatars. Like still in the game, simply not forced and an optional cosmetic thing.

Kenpachii said:
They removed the scoreboard because there was no way to fill 128 servers without massive bot injections.
Click to expand...

huh? Lol Thats....thats not really true though. It sounds like a funny theory, but its not true even remotely lol So I agree if you press the tab button on PC you can see like the list of players and what platforms they are on and if they are AI or not.

Did you not know that exist on all the platforms? I'm playing on Playstation and I can see all that information too lol So you can play in Portal with no bots as that is an option, but for the most part, when playing Conquest or Breakthrough, I've more so played with 95% HUMANS and 5% bots if that.

So Bots imho is a positive, it is something that has been asked for generations to return, them existing isn't an conspiracy and you can see if you are playing with AI on PC, PS and XB, no platform hides that info for some conspiracy or something lol

As far as I can tell from the rumors, it was a design thing for some feel good type thing, like they wanted everyone not to feel bad about dying a lot or other people getting more kills or having a better K-D o some shit lol Nothing to do with bots, nothing to do with platforms.

As shit, did you even think this shit thru? Why even fucking add AI next to the name using such a odd theory? if it was suppose to be some secret to get away with something, just not have that shit listed at all lol

Nah, this game should have never even become one of the fastest BF using that logic.

This IP looks like it will get hype on a game to game basis, if BFV wasn't enough to kill this IP at launch, as in sell WORSE Then BFV, then I don't even know how bad one even needs to bomb at this point if 2042 even after such a horrid beta is moving 4.2 million units.

Kenpachii said:
What battlefield players want is, traditional warfare and realistic visuals to deck it out with, with a engaging gameplay loop.
Click to expand...

Some do, some don't. I used to believe majority wanted modern, but looking at BF1 being the best selling BF in history....I'm not sure.

I think overall the community wants a quality game and I agree with you, engaging gameplay loop, but I don't really know 100% if the time frame really matters as long as its a good game.

Kenpachii said:
What EA wants, is a milk cow that competes against warzone/fortnite
Click to expand...

Sure, but they could have did that shit by just making that 2042 Conquest and Breakthrough portion Free To Play and making Portal deeper, as in 100% of BF3, BFBC2 etc.

So this is one of those situations where they can have their cake and eat it too. I can't ask a company not to make money where they see it being made, but my biggest issue is the quality of this title, the leadership ignoring the feedback given to DICE by fans and rolling out a game they already knew had design issues.

Gamers seem to have brutal expectations as DICE just announced that their late Feb patch which would have introduced SCOREBOARD v0.5 to the game got delayed to March

Starfield said:
Gamers seem to have brutal expectations as DICE just announced that their late Feb patch which would have introduced SCOREBOARD v0.5 to the game got delayed to March

I'm pretty sure 2042 barely has any scoring/point tracking implemented at all, so it's not just a matter of "creating a scoreboard" but developing and integrating a completely new score/award system.

Which again raises the question what the fuck they were thinking cutting corners like this.

SJRB said:
I'm pretty sure 2042 barely has any scoring/point tracking implemented at all, so it's not just a matter of "creating a scoreboard" but developing and integrating a completely new score/award system.

Which again raises the question what the fuck they were thinking cutting corners like this.
Click to expand...

It is clear to me that this game was originally supposed to be a Fortnite BR rival, hence the huge maps and focus on specialists. You don't need a real scoreboard in a BR game, only for how your squad is performing...which they did.

Then shortly before release they must have switched gears and now we have THIS abomination of a "game"
Last edited: Feb 3, 2022

BlackM1st said:
I wonder who's bright idea it was to put Windows logo into the bin in 2000 release lmao
Click to expand...

The upside to 2042 doing so poorly is how well previous games are doing. I decided to reinstall BF1 and was surprised to see a whole lot of activity. I had some fun with it again. Thanks EA.
You must log in or register to reply here.