It would of been interesting to see how it would of looked if designed around the og xbox hardware.

bender said:
There was plenty of buzz leading up to the release.
Click to expand...

Was there? I probably didn't notice at the time because games like GTA had no interest to me but there was a LOT more hype in magazines for GT3, MGS2, Silent Hill 2, etc. compared to GTA3.

I think the "hype" for GTA3 started when reviewers actually got a chance to review the game, and it just picked up tons of WOM and grew into a phenomenon from there. But prior to its release there wasn't a lot of big hype for it. Journalists thought it looked promising, and it previewed well, but it wasn't dominating hype circles prior to release.


CamHostage said:
Maybe in the UK, things were different. (Although again, Edge didn't pay it much mind, they instead spent their time on Galleon, "The next game from the creator of Tomb Raider!") Take-2 had better success with the franchise there (despite the creative energy to capture the feel of NYC/America, outside of the expansions,) maybe they concentrated exposure on 3 there. The world was on the web by 2001 though, and websites weren't going gaga for it either, most of their archives are up.

I'm telling you from experience though, maybe it was big on your playground, but I was in the business at the time (low on the totem pole; not claiming expertise, just saying I was around for all of these products and know how R*'s E3 booth loooked , and GTA3 was not the game everybody was running worldwide forecast predictions on.

I know GTA1/2 had radio stations, and GTA fans knew about that, but still, it was those types of features in GTA 3 which got it extended coverage in GameSpot and IGN (maybe partly because video was hard to download back then, but putting RealAudio track samplers up could help get around?) When they did a slew of little micro-features on stuff you could do or stuff you could find in the game, that's when it started to sink in that this game was way bigger than some "thug simulator".

The first two GTAs had their fans, but they couldn't convince people outside of those circles that they should spend some time with them. First one moved a million units worldwide, second game I'm not finding reports but maybe about the same (300k certified on PS1, not sure what other figures are out on GTA2.)

...Starting in August/September, before the game launched in October. The archive is still there: https://www.ign.com/games/grand-theft-auto-iii/articles 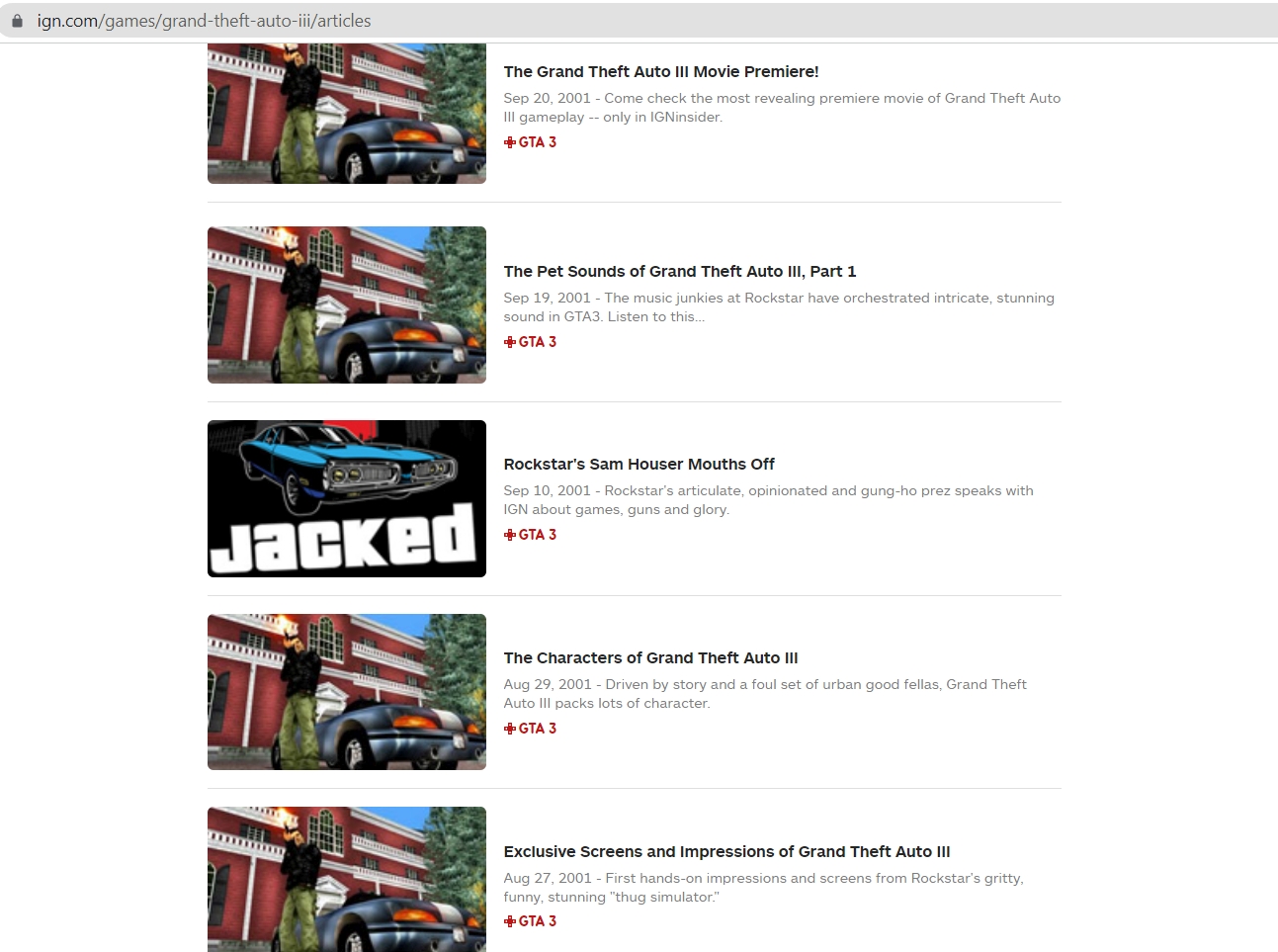 Yeah maybe hype for GTA3 was different in Europe but I read EGM, GamePro, GameFan, Gamer's Republic at the time and there wasn't a lot of big hype for GTA3 until maybe right before its release. I don't remember when it first started getting previewed but in terms of big open-world 3D games that gen Shenmue had a shitton more hype than GTA3 over a longer period of time, even if GTA3 went on to become a mega IP thanks to 3.

TBF as a kid then games like GTA3 weren't that interesting to me so I could've been selectively ignoring coverage of it in favor of games I actually liked, but it's easy to pull up some archived issues from the time to see what actual previews and coverage for the game was like in relation to the other mega-hits of that year. I'm willing to bet at least in America hype for GTA3 just prior to its release was no greater than other B-tier releases and not on the level of MGS2 or FFX for example.

Tho again, once it actually released, both the game being groundbreaking plus maybe patriotic sentiment in light of 9/11 gave it a massive boost in popularity shortly after launch in NA.
Last edited: Dec 16, 2021

so was it going to be multiplatform and microsoft rejected it leaving it as a PS exclusive by default?

TheGodfather07 said:
so was it going to be multiplatform and microsoft rejected it leaving it as a PS exclusive by default?
Click to expand...

I believe it was being offered to Microsoft as an exclusive but they weren't interested. That's what I took from the documentary. I don't see why MS would have refused a multi-plat game.

CamHostage said:
...Starting in August/September, before the game launched in October. The archive is still there: https://www.ign.com/games/grand-theft-auto-iii/articles

Yeah so not to be a dick but I wasn't talking to you, didn't respond to what you said. My comment is entirely apt in regards to the context of what the person I was replying to said.

Interesting...so what was thought as big evil Sony Money hatting an exclusive turns out to be the reality of MS being dumb.

You can't make this shit up

There has to be more to this story. They can't be that stupid.
Y

mcjmetroid said:
There has to be more to this story. They can't be that stupid.
Click to expand...

I need to dig this up, but early GTA3 looked completely different and ran at like 20fps. It was more cartoon like and didn't have it's unique dark and gritty look.

These would've been the builds shown around during this time, it's not that much of a surprise. If anything being constantly rejected was what moulded GTA3 into the game it was.
S

TheGodfather07 said:
so was it going to be multiplatform and microsoft rejected it leaving it as a PS exclusive by default?
Click to expand...

It was PS timed exclusive because they inked a deal with Sony, so likely the MS deal would be for some sort of exclusivity.

XBOX in a nutshell...

MatrixReloaded101 said:
GTA 3 didn’t have any hype before it’s release. A lot of people slept on the game until it come out and blow everyone away.
Click to expand...

I saw plenty of ads and hype when I was a kid, especially at blockbuster which was big for game ads back then.

GTA 3 is a lifetime achievement for gaming and right now it's neck and neck with Ocarina of Time for best game of all time.
You must log in or register to reply here.