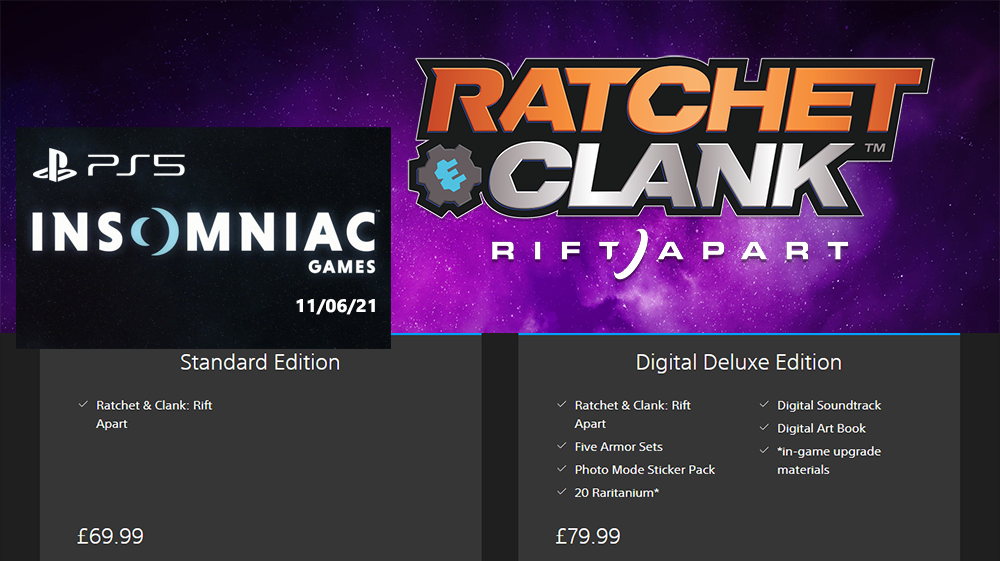 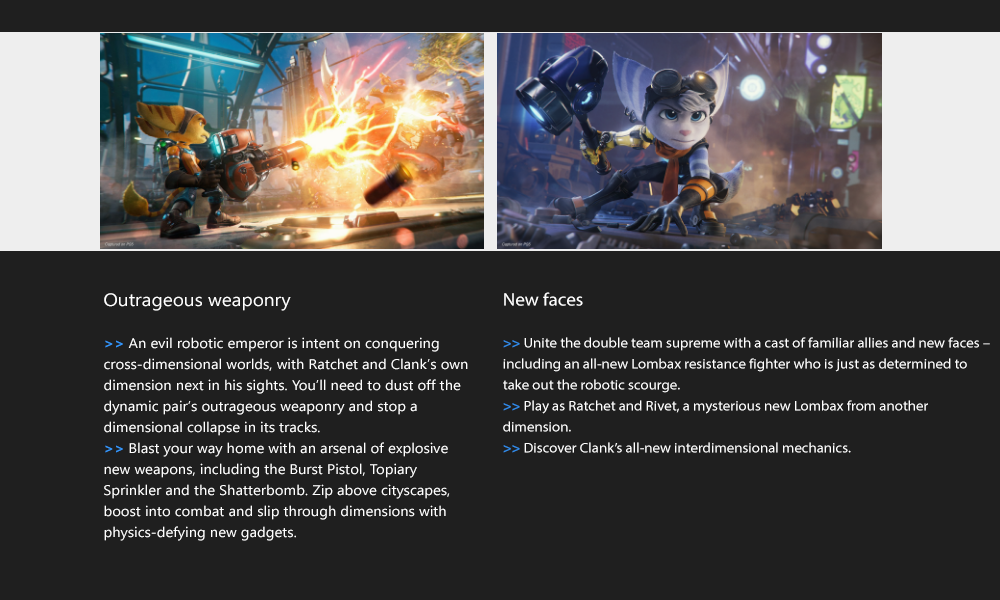 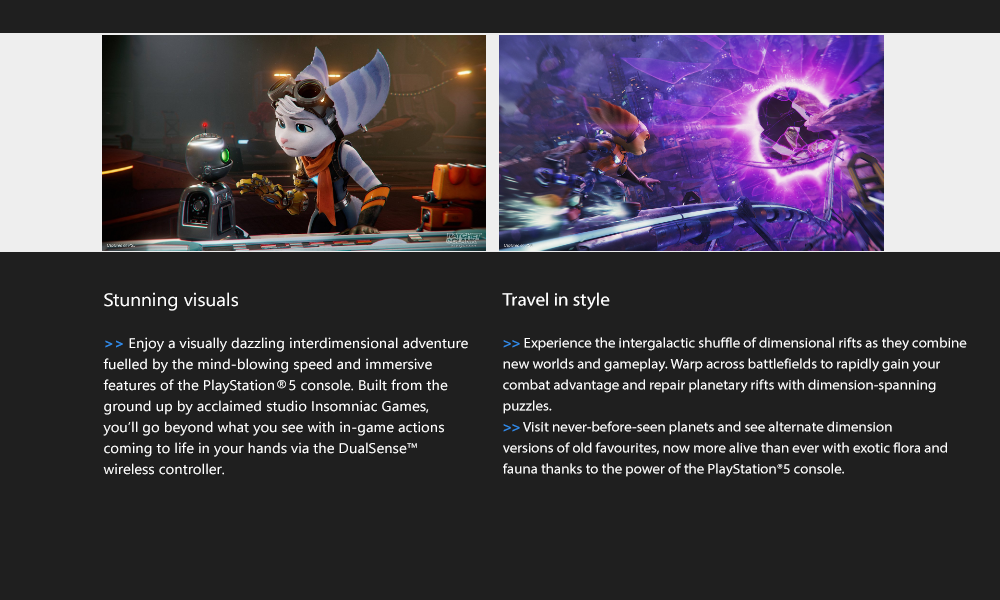 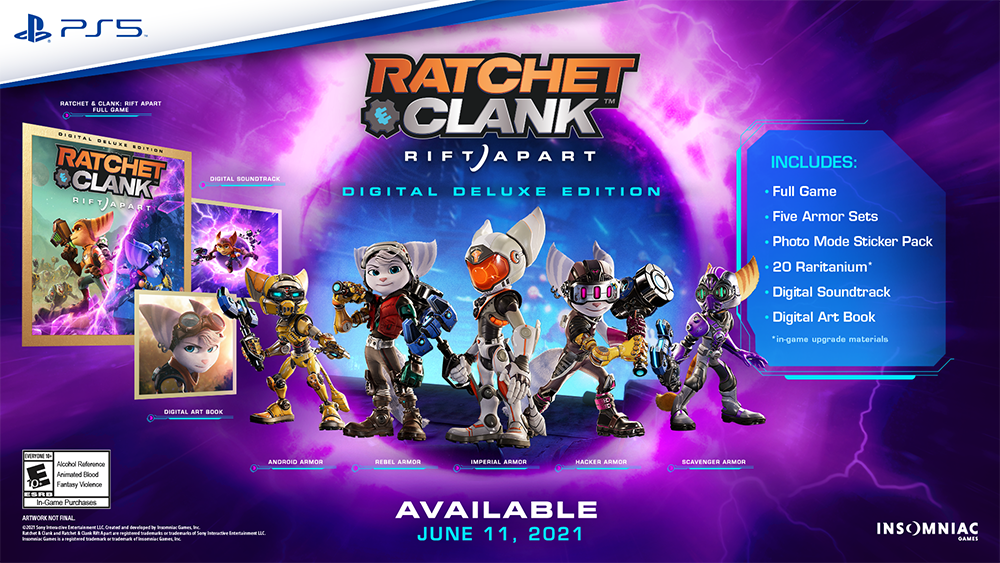 Reactions: SakkanartSilentJealousy, PSX, Toons and 31 others

I remember playing the original on PS2 a million years ago and I liked it a lot, but I have never had any desire to play another in the series for some reason.
Last edited: Jun 9, 2021
Reactions: Magnific0giganticus, CitizenZ and Bo_Hazem

Now this is one beautiful OT. Looking forward to playing this one right away when I get a PS5.
Reactions: hybrid_birth, JayK47, Woodchipper and 9 others

Good job with the OT.

Already pre loaded and ready to go. Some friends will come over on friday to celebrate the release of the game.
Reactions: Hobbygaming, laynelane, Bo_Hazem and 1 other person

Preordered and waiting the game to be delivered by the postal service.

Replayed Ratchet & Clank (2016) on PS5 after the 60 fps update and I'm so eager to feel what Dualsense implementations this game brings!

My favorite game series of all time getting the attention and hopefully the sales it deserves. Adam Sessler giving it a 5/5 took me back to when they gave Going Commando that and I immediately put it on my Christmas list back in 03
Reactions: Hobbygaming, Bo_Hazem and LMJ

This is one sexy OT. Can’t wait.
Reactions: Hobbygaming and Bo_Hazem

Got it pre-ordered, hoping to get it on Friday but might not arrive until Monday.
Reactions: Hobbygaming and Bo_Hazem

Very nice OP. Kids start camp next week so I’ll be able to devote some time to the game after the weekend. Can’t wait.
Reactions: Hobbygaming, Bo_Hazem, 3liteDragon and 1 other person

Still hunting for a PS5 but this and Demon Souls are definitely day one buys.
Reactions: Hobbygaming, laynelane, sncvsrtoip and 5 others

Nice job with the OT!

Looks like my local store is coming through again and having early copies tomorrow. Time to dive in soon.
Reactions: Hobbygaming, icy121, Bo_Hazem and 1 other person
Z

MasterCornholio said:
Still hunting for a PS5 but this and Demon Souls are definitely day one buys.
Click to expand...

That is already a better bundle than my PS4 with Uncharted 4+Ratchet & Clank was in 2017 tbh
Reactions: Bo_Hazem

This Thread really shows the passion of enthusiast gamers who love games like they were work of art; and yes, Ratchet and Clanc is pure work of art, beautiful, lovely. Thanks Insomniac.
Reactions: Hobbygaming, Bo_Hazem, cormack12 and 2 others

Mom’s basement with my tendies

Strongly debating calling out of work on Friday and doing a three day weekend binge on it
Reactions: Hobbygaming, Bo_Hazem, MrS and 1 other person

41 more hours until I pick up my copy!

So hyped!
Reactions: Hobbygaming and Markio128

Sony has blown away my expectations for both Ratchet and Returnal. Did not expect either of them to land so high up on Metacritic. Both are in the GOTY range which is nuts. I cant remember the last time a ratchet game was a GOTY contender. Maybe Future on PS3, but Xbox had a killer lineup that year and it was lost in the shuffle.

I hope Sony has bestbuy do some midnight launches for these games. They are starting to do Halo numbers and while Ratchet might not do TLOU2 numbers, i would love to be able to play the physical version at midnight. There is something magical about playing a new game at midnight.
Reactions: Hobbygaming, laynelane, Bo_Hazem and 4 others

"PS5 console approach a film-quality cinematic experience - and all running in real-time".

Reactions: Toons, hybrid_birth, keram and 9 others

Nice OT. My physical copy will be here by the time I’ve finished work on Friday and I can’t wait for it to melt my eyeballs. Like somebody else mentioned above, I’m tempted to throw a sickie on Friday haha
Reactions: Bo_Hazem and cormack12

I can't fucking wait for friday, i'll get home from work at 11:15 and then wait till midnight to start , 1st playthrough i think i'll set on the hardest difficulty and on fidelity mode(still debating on this)
Reactions: Hobbygaming, akaFullmetal, benzy and 3 others

Does this unlock 9PM PST tonight?

Having never properly played a Ratchet game, I downloaded the 2016 remake the other day, and am thoroughly enjoying it on my Ps5 and LG CX. It looks lovely.

Rift Apart is going to melt my eyeballs, isn’t it?
Reactions: EDMIX, CamHostage, Hobbygaming and 5 others

"PS5 console approach a file-quality cinematic experience - and all running in real-time".

No, God please don't get it started, lol.
Reactions: Three, Hobbygaming and Bo_Hazem

You'll spend more than $10 next weekend on food and other stuff outside. Financially, that extra $10 could save you more than what you'll spend in that weekend.
Last edited: Jun 9, 2021
Reactions: jshackles and hoplie

Anyone have the pic comparing the game to the movie?
Reactions: Hobbygaming and Bo_Hazem

Bo_Hazem said:
You're spend more than $10 next weekend on food and other stuff outside. Financially, that extra $10 could save you more than what you'll spend in that weekend.
Click to expand...

Like I said, brains are weird. Logically I know you're right. Realistically, I'm old and have tons of other things to play.
Reactions: existensmaximum and Bo_Hazem

Wait what, where does it say that?
Reactions: Hobbygaming and Bo_Hazem
R

Curious what mode everyone is planning to go with. I sort of want to see what the PS5 can do as long as it’s a smooth 30fps. Doesn’t help I recently replayed the PS4 game at 60.
Last edited: Jun 9, 2021
Reactions: Con-Z-epT and Bo_Hazem

Mom’s basement with my tendies

If a 10 dollar price increase after 15 years is your breaking point, you probably shouldn't have been buying 60 USD games in the first place.
Reactions: Metnut, smart_brazileiro, EDMIX and 4 others

HotPocket69 said:
If a 10 dollar price increase after 15 years is your breaking point, you probably shouldn't have been buying 60 USD games in the first place.
Click to expand...

Probably more a matter of principle, rather than financial. From my point of view.
Reactions: EDMIX, Bo_Hazem and jshackles

I get the psychological aspect of it but consider that in 2006, $60 equaled $79.50 adjusted for inflation today.
Reactions: Entroyp, jshackles, Bo_Hazem and 1 other person

The countdown on my PS5 says less than 14 hours - is that fake news?
Reactions: NikuNashi and Bo_Hazem
T

Low Moral Fibre said:
The countdown on my PS5 says less than 14 hours - is that fake news?
Click to expand...

Same, but timers are bugged on PS5. Game will unlock at midnight, like it should.
Reactions: Bo_Hazem and Low Moral Fibre

Every game has GI. It's just nearly all of them use GI light probes like this game does. RT shadows/reflections is expected. You won't tell the difference with RT shadows and shadow maps. The reflections however, will stand out.
Last edited: Jun 9, 2021
Reactions: 3liteDragon

HotPocket69 said:
If a 10 dollar price increase after 15 years is your breaking point, you probably shouldn't have been buying 60 USD games in the first place.
Click to expand...

It's not a matter of means - I buy tons of $60 games. But I also usually try to weigh the value of the games I'm playing against their cost, and my time. Most Ratchet games are 10 or so hours for me personally, so I'm looking at $7 an hour. (most reviewers say 8-12, so 10 seems like a good bet). That's hard to stack up against other games or services - for example I'm currently playing through Tales of Berseria on PC and it cost me $5.99 and I've already put over 40 hours into it ($0.15/hr). I paid full price ($60) for Animal Crossing last year, but between my wife and I we've played it nearly 800 hours so I consider it a good value ($0.07/hr). I put in over 60 hours each on Ghosts of Tsushima and Final Fantasy VIIR last year, both of which I paid full price for ($1/hr). To compare apples to apples with similarly sized games, I bought Mario 3D World / Bowser's Fury for full price and played through it with my son and it took about 10 hours, so $6/hour more or less (assuming I don't play 3D World, which I probably will at some point). That's pretty much the upper limit of what I'd consider to be a good value, and I still might get another 10-15 hours out of that game somewhere down the line.

I also know myself well enough to know that a losing value proposition on a game's price is going to drastically reduce my enjoyment of it, especially if it's a short game like this. I'll usually start being more and more critical of the experience the closer I get to the end. I can wait five months til it's on a pretty good discount over Black Friday (it'll also give them time to work out any bugs and issues, optimize performance, etc.) and probably enjoy it overall more than I would picking it up now because I'll be paying less. Not calling anyone that buys it at $70 a sucker or anything, just trying to give some insight into my own fucked up brain.
Reactions: HerjansEagleFeeder, Timmeehh and DigitalScrap

What’s the consensus of game length for this if you aim to do as much side content as possible?

I bought it. I really really hope I will enjoy it. I need a game exactly like this. Some thing I’m not going to marathon. That is not too difficult snd just fun and relaxing to play. I’m a big graphics hoe so hopefully that will be all I need to love this game and hopefully the the gameplay will be the cherry.
Reactions: PhillyPhreak11, Kagero, TrebleShot and 1 other person
T

Damm, just recently finished and got platinum on the ps4 RC and was considering skiping this one for a while but it`s getting harder and harder.
You must log in or register to reply here.